It's Back to the 80's with the students of Coláiste Cholmcille, Ballyshannon 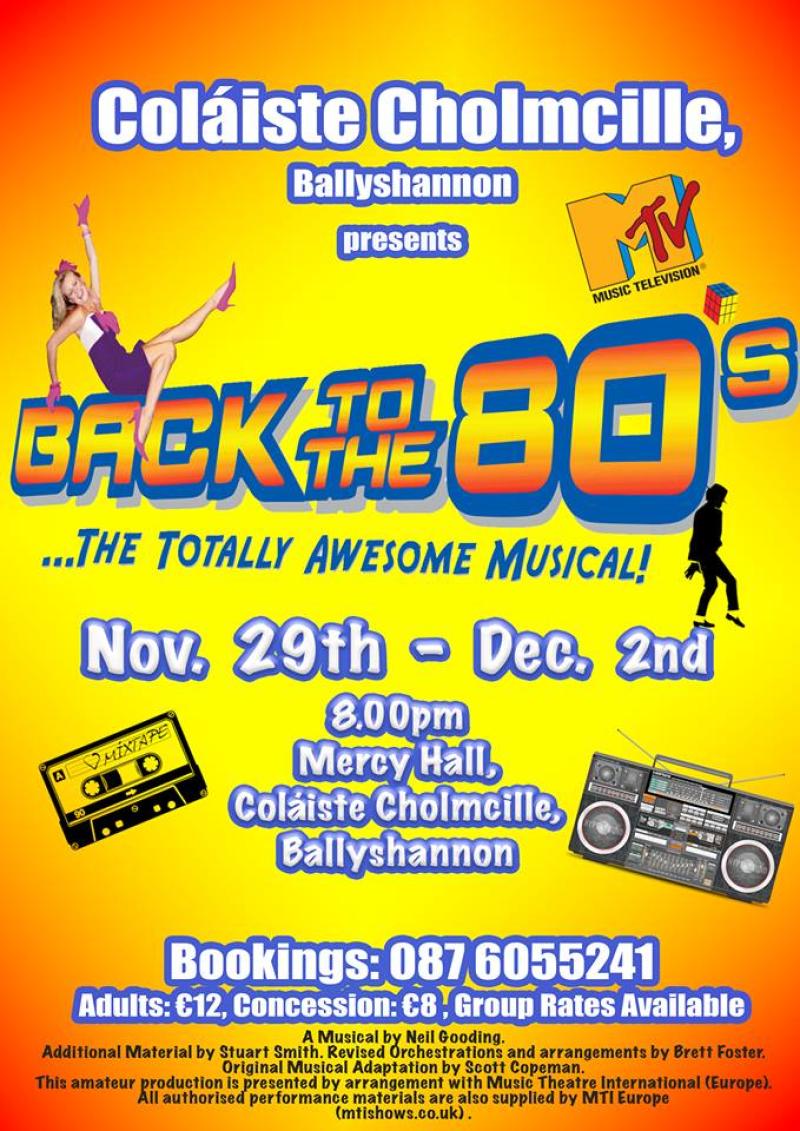 Back to the 80s Musical

Neil Gooding's Back to the 80's Muscial will take on a new, fresh life when it appears onstage at Mercy Hall, Coláiste Cholmcille, Ballyshannon, Co Donegal this November and December.

A younger generation has discovered the fresh, optimistic spirit of this infectious musical. Coláiste Cholmcille are proud to let their voices be heard, with a message that is not just for kids, but for everyone, especially those with a nostalgia for those by gone days when “girls just wanted to have fun”.

Join the graduating class of William Ocean High School as they live through their final senior year - as they experience the fun, the heartbreak, the loves and the loneliness of growing up.... all set to the biggest hits of the 80's!!

Set in the USA, Back to the 80's tells the story of the senior class of William Ocean High School that graduated in the 1980's, as remembered and seen through the eyes of Corey Palmer, who is now 30-something.

The then 17-year-old Corey is madly in love with his next-door neighbour, Tiffany Houston, one of the coolest girls in the school. However, she barely notices this, as she is too busy mooning over Michael Feldman, the hottest guy around. Michael and his friends are athletic and good-looking - the kind of guys that Corey and his two best friends dream of being. However, while they may not be the coolest guys in school, they are still one up on Feargal McFerrin III, whose best friend is his computer, and who believes the crazy notion that one day CD's will replace cassette tapes.

The year commences with Class President Elections: Michael steals Corey's election speech, and when he uses his ideas and promises the girls a kiss for a vote, he becomes President, with Tiffany as his Vice-President. Corey is left looking on despairingly.

During the year, several new students arrive at the school - Mel and Kim Easton (the all-singing, all-dancing twin cheerleaders) and Eileen Reagan, whose life becomes a nightmare when Michael and his gang start to send her fake love letters.

Will Tiffany ever see the evil side of Michael?

Meanwhile the teachers are having issues of their own. Mr Cocker, after being in a relationship for two years with the apparently conservative English teacher, Miss Sheena Brannigan, confiscates an old edition of Penthouse from a student, only to discover that his girlfriend is the centerfold. How will he cope? Will their relationship be able to survive this hurdle?

Throw in a Star Wars dream sequence, high-energy dance routines, the obligatory 80's party scene, copious amounts of blue eye-shadow, twenty cans of hairspray, as well as some of the most popular songs ever written, and the result is a musical that will not only delight and amuse an audience of any age, but will also inspire any young cast.