Let music (virtually) take you places with the Dock, Carrick-on-Shannon this April 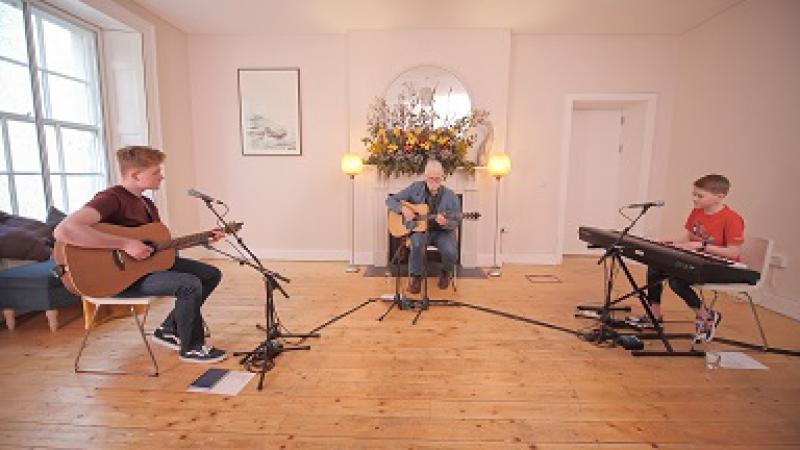 Charlie McGettigan with his grandsons Padraig and Cathal (on keyboard) Bennett

New songs inspired by the local landscape and locations throughout the county and region will be released online for a worldwide audience by The Dock throughout April in The Sky From Here, a series of exclusive streamed performances.
The intention of the project is to shine a positive light on the region and to bring communities together in celebration of their localities.
The Dock commissioned four groups of musicians to compose the songs and then recorded them performing their new work as part of full-length gigs. The individual songs will be released as especially produced videos that will include images of the local landscape interwoven with the performances.
The full-length performances will also be made available to view on www.thedock.ie on four weekends beginning on Thursday, April 8.
Each of the commissioned songs celebrate the musical talent in the region and stunning beauty that surround us in the North West of Ireland. A homage to talent, musical friendship and a love of place The Sky From Here introduces new songs by Charlie Mc Gettigan and Padraig Bennett, Perry Blake, Dirty Dreamer and Free Speaking Monkey. The four groups of musicians found inspiration for their songs in different areas of the region, from around Kiltyclogher through the landscapes of Dromahair and Drumshanbo and the routes connecting Carrick-on-
Shannon and Boyle.
The songs will bring listeners on a broad musical journey and a sense of new discovery in place and music. We hope that they will capture some of the essence that pulses through local places and landscape and show the world what a wonderful place Leitrim and the surrounding area is to live in or to visit. While the journey may be virtual the experience will be real. We would encourage everyone to join us throughout the month of April for The Sky From Here.
To find out more visit www.thedock.ie.

About the artists and the songs

The four-piece guitar band Free Speaking Monkey hail from the Kiltyclogher/Manorhamilton area in North Leitrim. Made up of Brian Sweeney (Dune Collective) and Ciaran Rock (former songwriter and guitarist with the Pale) Dee Armstrong (Kila) and Sean O'Donnell.
“Living in the historic village of Kiltyclogher for the last 21 years, I wrote this song inspired by the town's surrounding natural landscape, endearing folklore and its remarkable, built heritage. The theme of the song is based on the towns resilience and a call to return to its growing diaspora.”
Tune in here to listen to their song.

Drumshanbo was the inspiration for a new song by the very well known Charlie McGettigan and his very talented grandson Padraig Bennett. A former Eurovision Song Contest winner Charlie’s songs have been recorded by many artists. Padraig is a 16-year-old 5th year student at Maynooth Community College who has been studying music from an early age. An accomplished violin player, he has recently turned his attention to song writing and guitar.
“It’s lovely to write songs about places you love - Spancil Hill, the Cliffs of Dooneen spring to mind - and I have written many such songs. However when asked to write a new song about my home place I thought it might be nice to get a young person’s perspective on my home place of Drumshanbo. My grandson Padraig Bennett has been coming here since he was a baby seventeen years ago. He has always loved Drumshanbo and still loves coming here so the two of set about writing 'The magic of Drumshanbo Town',” notes Charlie.
Listen to their song here.

The Dromahair based singer/songwriter Perry Blake is known internationally for the delicate, downtempo, melancholic style of his songs and his soft singing voice.
The inspiration for his commissioned song came from his sense of the ways in which people in his locality were being affected by the new realities of living in lockdown.
"The song I've written for this project (Let's Fall in Love) is loosely based on people's experience of lockdown in North Leitrim and the effects it can have on relationships. Many people who normally work away from home have spent the past year in one place.
“There can be an almost monastic stillness to this new reality but it can also be difficult for couples used to distractions such as travel and wider interactions in their day to day lives. The song is based on a fictional couple who are simply trying to fall in love again,” said Perry.
Listen to Perry's song here.

Dirty Dreamer: Having played together for a number of years with the Choice Prize nominated Come On Live Long, Dirty Dreamer formed in 2018 over months of writing and experimenting with a new sound.
“The essence of this song came about when I was late for a rehearsal. Ken and Louise had been jamming a little idea and the melody and line 'we always miss' came to me instantly and I just started singing it straight away. The song is about the danger of expectations. We always build up an idea or event in our heads and more often than not we are let down because we expect too much. The real magic happens when we least expect it.”
You can listen to Dirty Dreamer's song here.