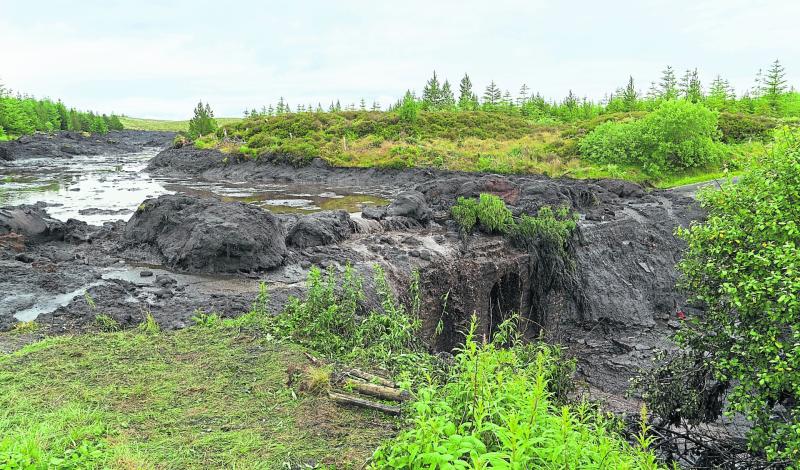 Some of the damage caused by the landslide. Picture: Gerry Faughnan

Local TDs have expressed their annoyance and anger at the “completely unacceptable” wait for compensation for those impacted by the Shass Mountain landslide. Farmers and foresters affected by the slippage are still waiting for compensation some 20 months after the incident.
The landslide occurred on Shass Mountain near Drumkeerin on June 28, 2020. An area of upland blanket bog, including an area of the adjacent forestry plantation, moved downhill. As a result liquefied peat, vegetation and trees slid downhill towards the Difagher River and down towards Lough Allen. The resulting slide inundated the Dawn of Hope Bridge with the slippage traveling some 7km downstream inundating farm and forestry land.
Officials from the Department of Agriculture, Food and the Marine mapped the areas affected with the overspill calculated to impact some 24.09ha in total.
Last Wednesday, April 6, Deputy Marian Harkin and Deputy Michael Fitzmaurice raised the matter in the Dáil.
Deputy Harkin pointed out that some good work had been achieved by an inter-agency group established by Minister of State, Deputy Michael Noonan, following the landslide, however she said that more than 20 farmers and eight foresters were still adversely affected by the damage.
While Force Majeure has been used over the last two years to enable the farmers to access payments, Deputy Harkin said that the “Minister of State (Deputy Sean Fleming) and I both know that Force Majeure can no longer apply after two years”, adding that farmers needed certainty about the status of their payments.
“The farmers have been patient, as have public representatives. When similar incidents occurred in other parts of the country, they were done and dusted and compensation packages were put in place within 12 months,” she said. “We have waited more than 20 months now”.
Deputy Michael Fitzmaurice also called for clarity on the compensation package adding that, despite a commitment being given, this has still not been resolved.
“We cannot keep going on in limbo. Farmers need clarity, especially as they are living in uncertain times,” he pointed out.
Reading a response on behalf of the Minister for Agriculture, Minister of State, Sean Fleming said that the Department initially contacted each of those affected by the landslide to assure them that their farm payments will not be impacted. He said that Force Majeure was applied in 2020 and 2021 and will apply again in 2022.
However, Minister of State Fleming said that “with regard to the compensation of landowners (the Minister for Agriculture's Department) does not have a contingency fund. Any ex gratia payment will have to be sanctioned by the Minister for Public Expenditure and Reform.”
He added that discussions are still continuing on this and the Department of Agriculture “will contact the affected landowners as soon as there are any further developments.”
Deputy Marian Harkin however described the situation as “completely unacceptable” adding that landslides in the Minister of Agriculture, Food and Marine's own constituency were “processed and dealt with in just over five months”.
She again noted that it was over 20 months since the landslide on Shass Mountain occurred.
“I wonder if it is because the farmers in County Leitrim have not marched and blocked roads. Is it that they waited and are still waiting on the Minister to deliver on his promise?” she asked.
Last Friday the Department of Agriculture, Food and the Marine sent a further update to Deputy Harkin and Deputy Fitzmaurice noting that, as had occurred in 2021, “Department officials will shortly repeat this process of contacting the farmers in respect of applications for the 2022 CAP scheme payments.
“This reassurance and personal contact from the Department aims to ensure that errors, particularly relating to declared land areas, are minimised. I wish to confirm that, in the circumstances, Force Majeure will apply again in respect of 2022 farm payments,” noted the statement.
“This Department is engaging with the Department of Public Expenditure regarding a compensation package, details of which should be finalised shortly. Once the package is agreed, Department officials will contact the affected landowners.”