Fodder deliveries continue around the county 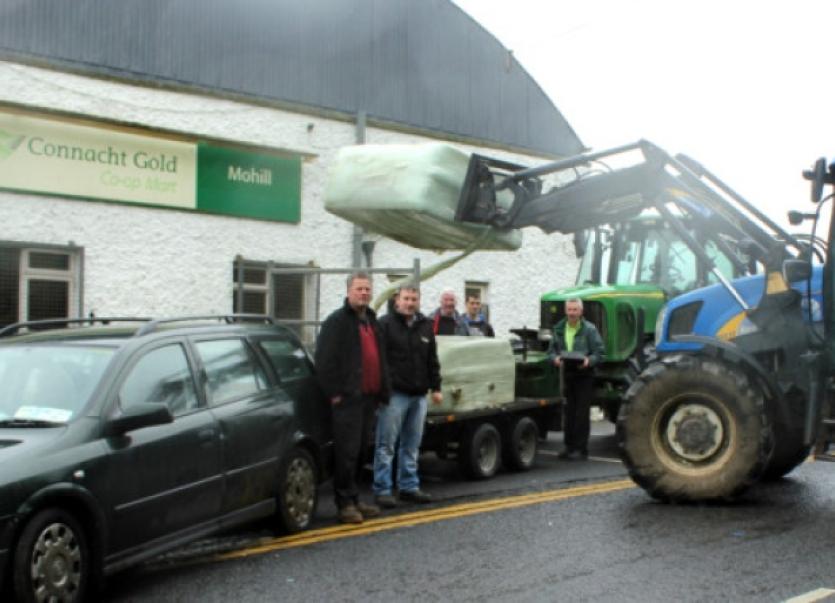 Farming organisations, Co-ops, local marts and even banks have now rowed in behind the farming community as the struggle continues to source fodder for animals after the appalling Summer and Winter of 2012.

Farming organisations, Co-ops, local marts and even banks have now rowed in behind the farming community as the struggle continues to source fodder for animals after the appalling Summer and Winter of 2012.

IFA has launched a Fodder Crisis Fund of €1m to assist farmers through what the organisation has described as “the worst fodder crisis in living memory”.

The fund has been put together from the Association’s own resources, and matched with generous contributions from the Irish Farmers Journal, IFAC Accountants, IFFPG, Origin Enterprises plc and FBD Insurance. A bank account had been set up in AIB, Naas Road (04408444, Sort Code 93-36-27). Any other agri-businesses that wished to assist the effort are more than welcome to contribute.

“Now that imported forage is required in increasing amounts, it is important that costs are kept to a minimum. The fund will be used to provide a transport subsidy to the marts and private merchants, which are importing forage, but have no access to the Government’s transport subsidy scheme which is operated through the dairy co-operatives only”.

For forage imported from the UK by marts and merchants, a transport subsidy of €500 per load will be provided, with €750 per load for imported forage travelling in excess of 250km from the port.

Any mart or private merchant wishing to avail of the transport subsidy must pre-clear support through IFA in advance. This support will be maintained until the middle of May, when it will be reviewed.

In addition, IFA spent last week in France and have purchased 3,000 tonnes of high quality hay for shipping to Ireland. The crisis fund will be used to cover the transport and shipping costs. The hay will be distributed to farmers, at cost ex-port, by co-ops and merchants when it arrives in Ireland later this week.

In recent days the ICSA organised a consignment of hay and straw bales for distribution at Drumshanbo Mart. The farming organisation subsidised the cost of transporting the bales and distribution was made to the worst impacted farmers first.

ICSA President, Gabriel Gilmartin said “It’s at times like this that the farming community must unite and support each other in whatever way we can. Hopefully the delivery will take some of the pressure off on Leitrim farms that are really struggling.”

Connacht Gold has also come to the help of struggling farmers importing 50 loads of hay and haylage from Britain for delivery across the eight counties of the Connacht Gold region last week.

The feed was delivered to Connacht Gold stores in the five counties of Connacht, Longford, Westmeath and Donegal.

All hay and haylage was given to farmers at cost price and the cost of transport was significantly reduced by the special fund set up by the Minister for Agriculture, Food and the Marine Simon Coveney.

The co-op is also continuing to import a range of lower cost supplementary feeds that will help farmers stretch the limited amount of silage, hay or straw which are also being sold at cost price.