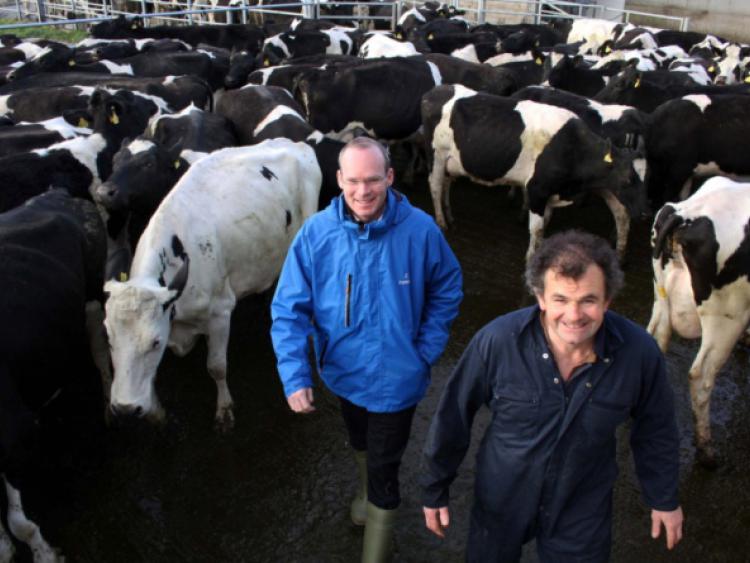 The Minister for Agriculture, Food and the Marine, Simon Coveney TD has welcomed the abolition of milk quotas across the European Union.

The Minister for Agriculture, Food and the Marine, Simon Coveney TD has welcomed the abolition of milk quotas across the European Union.

The Minister said “this is the most fundamental change to Irish Agriculture in a generation.

Since 1984, the industry has operated within a quota environment but now the shackles are off and the sector can start to realise its full potential. This is a great day for the rural Ireland. The direct and indirect economic benefits will be felt all over the country.

Quota abolition means the potential for increased employment, with Teagasc estimating that it could create 15,000 new jobs over the next 5 years”

In that same period, production in New Zealand, with a grass-based system similar to Ireland’s, has increased from 7.6bn litres to about 19bn litres. Quota abolition means the opportunity for increased production and export volumes, particularly to third country markets. Since 2007 approx €2bn has been invested in Irish farms and Teagasc estimates that a further €1.4bn of on-farm investment will be required to meet the targets of Food Harvest 2020.

Minister Coveney added “I believe that quota abolition will work for Ireland because we produce milk in a way that is competitive on global markets and built on a natural, environmentally sustainable production model built on grass. Increasing dairy production will dramatically increase the value of exports, and is already resulting in increased employment creation and investment in rural areas. Increased output will be exported, and demand will be driven by global demographics – increasing population, increasing affluence and the urbanisation and westernisation of diet in developing economies. I am working closely with State Agencies and Industry, to further increase market opportunities”.

The Minister also added “We should be mindful of course that there will be challenges in the post quota world and any investment should be made on the back of sound financial plans.

Price volatility has been a reality for a number of years now, but Irish processors and farmers are capable of dealing with these vagaries, by maximising efficiency, by greater use of fixed price contracts, and by using technology and innovation, supported by the State, to add value to high quality raw materials.

Minister Coveney concluded “there are also a number of additional initiatives which the Government has taken to help ensure that the Irish dairy sector enters the post quota era as smoothly as possible.

“I am working closely with Minister Noonan to ensure that existing and future taxation policy reflects the Government’s commitment to agriculture.

“Of interest to dairy farmers here will be the announcement in last October’s budget to provide for income averaging over five years when it comes to paying income tax bills. In addition, priority has also been given to measures for the dairy sector in the Rural Development Plan including on-farm investments and knowledge transfer programmes for farmers.

“I have met regularly with Irish banks during which the need for flexibility in their dealings with farmers experiencing temporary cash flow difficulties in 2015 has been impressed upon them”.