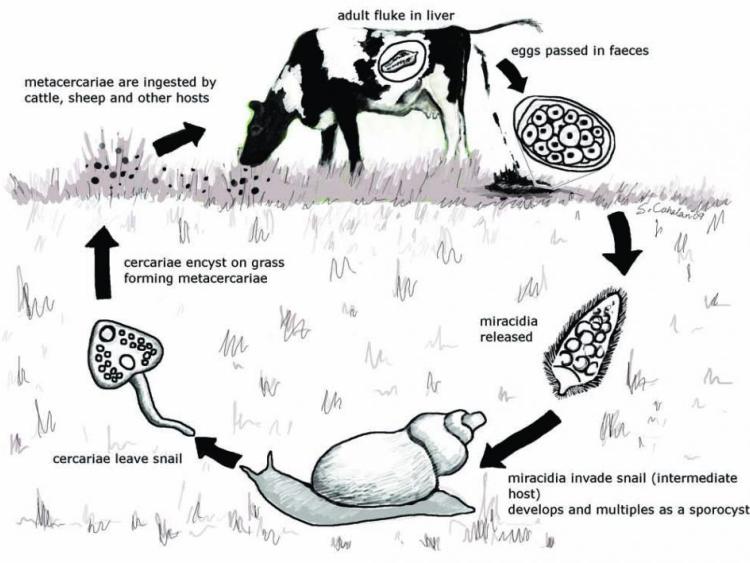 Each year, the Department of Agriculture, Food and the Marine advises farmers of the predicted risk of disease caused by liver fluke (Fasciola hepatica) infection in livestock based on advice received from the Liver Fluke Advisory Group.

The risk of disease due to liver fluke infection is high for most parts of the country apart from isolated areas of the east and southeast where there is a risk of occasional losses in untreated animals. This forecast is based on meteorological data provided by Met Éireann with regard to weather conditions last winter and rainfall during the summer and early autumn of this year.

Blood samples collected by Department staff from a semi-random selection of lambs born in 2016 (n=928) across 24 counties were tested for liver fluke antibodies by the RVLs to determine their level of exposure. The number of samples tested in 2016, when compared to 2015 figures, showing moderate to heavy challenge with liver fluke has increased by 22 and 24%, respectively. These moderately and heavily infected lambs were from the midlands and west of the country.

Further to the disease forecast, preliminary information from the Animal Health Ireland Beef HealthCheck programme suggests that nationally the frequency of fluke damaged livers in cattle at slaughter has increased slightly over the summer months and into the autumn, with live fluke detected at low but consistent levels through this period. The frequency of these findings is greatest in cattle going to slaughter from north western and western counties. The Beef HealthCheck programme now provides a high level of coverage of cattle nationally, and work is ongoing to analyse the information it provides.

In assessing the risk of liver fluke disease on any particular farm, variation between individual farms in their soil type (whether soils are heavy or free-draining) must be taken into account, in addition to weather. The intermediate host, which is the mud snail, tends to be located in slightly acidic and muddy conditions. Thus, areas of fields with rushes are a particularly common location where mud snails can be found.

Aside from local conditions on the farm and prior weather conditions, it is important that livestock owners also factor in prior liver fluke history on the farm.

Liver fluke infection tends to be chronic in cattle, resulting in ill thrift and poor performance. Similarly in sheep, chronic disease can occur. However, infection in sheep can also result in sudden death in cases of heavy challenge.

Livestock owners should continue to be vigilant for any sign of illness, ill thrift or mortality in their stock and should consult with their veterinary practitioner for diagnosis of liver fluke infection or other potential cause(s) of these clinical signs. It is recommended to submit carcasses to a RVL for post mortem examination in cases where the cause of death is not obvious

Information from abattoir examination of livers (Beef HealthCheck reports for cattle) of previously sold fattened stock is also a valuable source of information to inform livestock owners of the incidence of liver fluke infection on their own farm or on the efficacy of their control program.

With regard to dosing, livestock owners need to factor in the time of year when doses are being given. For example, when treating in the autumn or early winter, treatment should be directed at all stages of the liver fluke (early, immature and mature stages). Later in the winter when animals are housed, treatment can be more directed towards mature stages. Therefore, it is important that product choice to match the stage of development of liver fluke is considered when choosing a flukicide. Advice should be sought on the need (if any) for retreatment and the appropriate interval at which such treatments should be given. This is especially important given that resistance to flukicides is becoming an increasing concern.

Where it is feasible, and as a long term control option, areas of fields which are suitable habitats for the intermediate host (wet muddy areas often containing clumps of rushes) should be either fenced off or drained. This will result in a permanent reduction of snail habitat.

What about Rumen Fluke?

There have been significant, but as of yet isolated incidents, where immature rumen fluke has been diagnosed as the principal cause of mortality in both cattle and sheep on both the east and west coast in the last six weeks. Before embarking on potentially needless treatments, it is important that livestock owners seek advice from their veterinary practitioner and all cases of scouring or sudden deaths in cattle and sheep should be fully investigated. The finding of rumen fluke eggs alone in faecal samples is not reason enough to warrant treatment of animals.

Further detail on liver fluke and its control and information on flukicide selection along with further information on the Beef HealthCheck programme is available at http://animalhealthireland.ie/ ?page_id=22 .