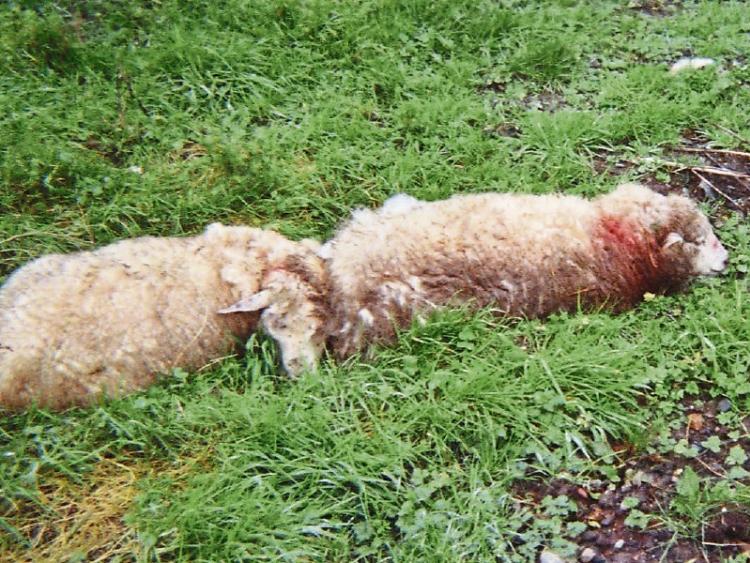 Pictured are sheep attacked by dogs in the Leitrim area last year.

Dog owners are being warned to keep their animals under control at all times after sheep were attacked and killed near Boyle last weekend.
The incident, which occurred in the Kingsland area sometime on Saturday night/Sunday morning last, resulted in the death of four animals and left many more injured and traumatised.
Earlier this year IFA Co Leitrim Sheep Chairperson, Kevin Comiskey issued a stark warning to all dog owners to keep their pets under control.

Mr Comiskey stressed that dog owners are liable for any losses as a result of dog attacks. He said farmers have a right to protect their sheep flock and can shoot a dog worrying, or about to worry their flock.
Statistics collated by IFA indicate that the problem of dog attacks on sheep may be in the order of 300 to 400 attacks per annum, with 3,000 to 4,000 sheep injured and killed. Data on dog attacks gathered by the IFA shows an average of 11 sheep killed or injured per attack.
Mr Comiskey said marauding dogs can inflict horrendous damage on a sheep flock.
“Unfortunately, IFA is taking calls on a frequent basis from sheep farmers around the country who have suffered attacks. There are far too many dog owners not taking the responsibility that goes with owning a pet. Dog owners have an obligation to have their dog under control at all times,” he said.
IFA has a Protocol to help farmers who encounter a dog attack on their sheep flock. You can view this protocol on the IFA website www.ifa.ie.