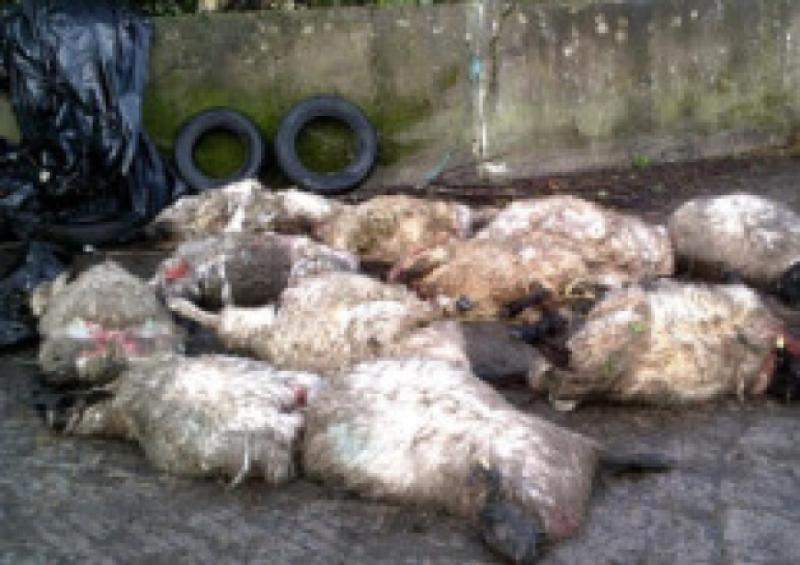 These animals were killed by a dog attack earlier this year.

IFA National Sheep Chairperson, John Lynskey has called for much stronger action to address the problem of marauding dog attacks on sheep flocks.

He said with the darker evenings and nights this time of year, dog attacks increase and recent cases have been reported in Wexford, Kildare, Offaly, Galway, Dublin and Roscommon. Some of these attacks are vicious with defenceless sheep flocks savaged by marauding dogs inflicting terrible suffering and pain and in many cases death on the sheep.

The Sheep Chairperson said dog owners need to take a much more active and responsible approach towards ownership and towards ensuring that their pets are under control at all times.

He warned, “Owners can be held responsible for any losses involved in dog attacks, with serious financial and legal consequences. Farmers have a right to protect their sheep flock and can shoot a dog worrying, or about to worry their flock.”

85% of dogs are now microchipped, according to the Department of Agriculture but Mr Lynskey is calling for a single database to be introduced with controls on change of ownership so all dog owners are held accountable.

Mr Lynskey also encouraged all dog owners, including farmers, to make sure to get their dogs microchipped.

He called on Minister Creed and the Department of Agriculture to launch a major publicity campaign on responsible ownership stressing a major TV, radio and social media campaign is required to get the message across to the 800,000 dog owners in Ireland.

Statistics collated by IFA indicate that the problem of dog attacks on sheep may be in the order of 300 to 400 attacks per annum, with 3,000 to 4,000 sheep injured and killed. Data on dog attacks gathered by the IFA shows an average of 11 sheep killed or injured per attack.

IFA has a protocol to help farmers who encounter a dog attack on their sheep flock. The protocol involves an easy-to-follow 10-point Plan of Action.

It deals with what a farmer should do if they have a dog attack on their flock and also outlines important aspects of the law and how the dog warden service and the Garda can help. It also sets out how to keep a full record of the attack, which can be used as evidence at a later stage.

Download the IFA Protocol for Farmers on Sheep Kills by Dogs here.