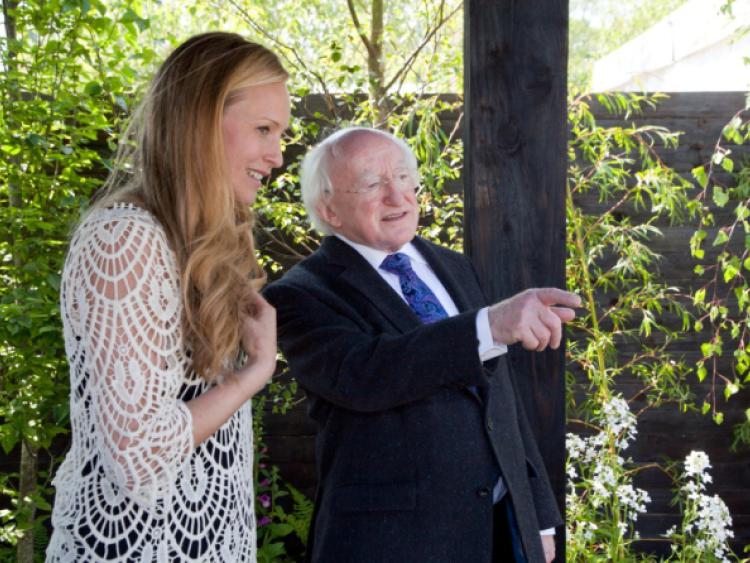 Bloom In the Park was a fantastic experience for Leitrim garden designer Leonie Cornelius with a number of prestigious visitors attending.

Bloom In the Park was a fantastic experience for Leitrim garden designer Leonie Cornelius with a number of prestigious visitors attending.

The Taoiseach Enda Kenny and President Michael Higgins both visited her show garden, “A Love Letter to the West”, and it was all topped off with a silver gilt medal from the show.

Now Leonie is asking for help from the local Sligo and Leitrim communities to rebuild the show garden in Five Mile Bourne next weekend (15/16 June). Rather appropriately - 16th June is Bloomsday.

“This is my chance to give something back to the community”, said Leonie Cornelius, “The garden is being rebuilt on council ground and will be open for everyone in the community to see it, just as I’ve always wanted it to be. I’d like to thank Michael Comiskey for all his help in securing the perfect location on the lake”.

The biggest part of the garden build is the structural part and that’s where skilled help will be really valuable - experienced landscapers and carpenters in particular are asked to give time to the project if they can. Also needed are strong gardeners handy with a spade or shovel, and willing helpers.

“It’s going to be really hard work”, smiles Leonie, “But we’re hoping it’s going to be a bit of a “gardening party” too. We’ll have some refreshments on hand and as much equipment as possible - but it would be great if volunteers could bring along some equipment and a packed lunch - just in case!”.

Volunteers are asked to contact Marilyn North (Tel: 083 1450421) who is co-ordinating the building teams.

“A Love Letter to the West” is based on the beauty and spirit of the West. It is a modern yet stylishly natural garden, with a dramatic scorched timber garden hut and beautiful natural planting. At Bloom the garden included a purpose built pond, but back home in Leitrim it will be located right on the lake edge, seamlessly settling into the landscape.

All of the plants used in the garden were Irish grown, some by Leonie herself. After the tortures and stresses of being part of a show garden, most of them will need to be replaced for the new location. Leonie Cornelius is a qualified garden designer and interior architect who runs Blume Design House (www.blume.ie). In 2012 she came to national attention, winning the RTE SuperGarden competition for designing a family garden. This was followed by a prestigious gold medal and Best in Category award at Bloom In the Park, Dublin. This year she was the garden design expert on RTE tv how ‘Today’.