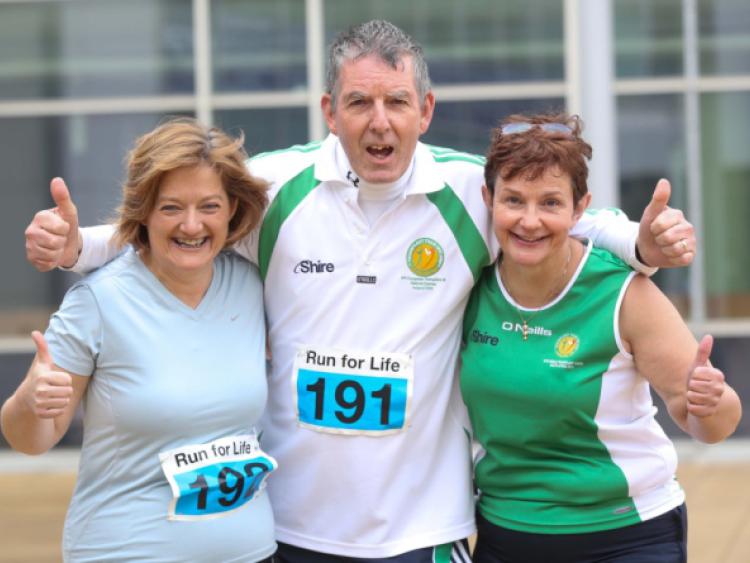 Hundreds of people from all over Ireland donned their running shoes on Sunday,September 15, and demonstrated their support of organ donation by taking part in the Irish Kidney Association’s Run for a Life, which was sponsored by Astellas Pharma and held at Park West Business Campus, Dublin.

Hundreds of people from all over Ireland donned their running shoes on Sunday,September 15, and demonstrated their support of organ donation by taking part in the Irish Kidney Association’s Run for a Life, which was sponsored by Astellas Pharma and held at Park West Business Campus, Dublin.

Among those taking part in Run for a Life were two kidney patient toddlers, Thomas Howe from Kerry and Tadhg McElroy from Wicklow, and their parents who came together to celebrate their landmark second birthdays which took place over the past week. Since her kidney failure diagnosis three years ago, Lisa Dalton Bird from Duleek, has taken part in the last three annual ‘Run for a Life’ events along with her husband and three children. Another man pleased to support the event with his wife and children was Niall McAuliffe from Laois who receives dialysis treatment.

Several people who have received living donor kidney transplants travelled from different parts of the country for the event. They included a couple involved in the first ever spouse to spouse transplant which took place in Ireland in 2008, Ned and Deirdre Crowe from Tipperary and their sons. James Nolan from Kildare who received a living donor kidney transplant over two decades ago was joined in the fun run by his donor sister as well as his mother, wife and three month old son.

Also playing his part in support of organ donation at the event was Professor Jim Egan, Director of the Organ Donation and Transplantation Office and Consultant Respiratory and Lung Physician, The Mater Hospital Dublin.

Showcasing the success of organ donation at Run for a Life were members of the successful Irish team who took part in the 19th World Transplant Games in Durban, South Africa last month.

Mr. Colin White, Race Organiser (Irish Kidney Association) explained, “Run for a Life, which is now in its fifth year, offers an opportunity for the general public to celebrate the success of organ donation in a fun way while at the same time show their solidarity with people living with organ failure. It’s wonderful that close to 400 people travelled the length and breadth of the country to Dublin’s Park West to support such a worthy cause.”

The main sponsor for the event is pharmaceutical company Astellas Pharma Co. Ltd. Its Marketing Manager, Patricia Kelly said,“Astellas is proud to be once again partnering with the Irish Kidney Association in Run for A Life 2013. Astellas is committed to Changing tomorrow for patients in Ireland; and raising awareness for organ donation has the potential to really change outcomes for people on transplant waiting lists. We enjoyed being part of this fun event!”

The Run for a Life has two main objectives.  Namely, to promote the organ donor card by raising awareness of the value and success of organ donation and transplantation and to raise funds to support the Irish Kidney Association in its on-going work.

The Irish Kidney Association (IKA) is charged with the promotion and distribution of the organ donor card in Ireland. The prime role of the IKA is to support patients and their families affected by end stage kidney disease and are either being treated by dialysis or have a working kidney transplant.  As the only organisation representing the views of Irish kidney patients, The IKA continually lobbies at all levels on their behalf. The Irish Kidney Association also manages sports programmes for dialysis patients and transplant recipients and manages Team Ireland’s involvement at national and international sporting events including the biennial World Transplant Games and the European Transplant & Dialysis Games which take place every alternate year.