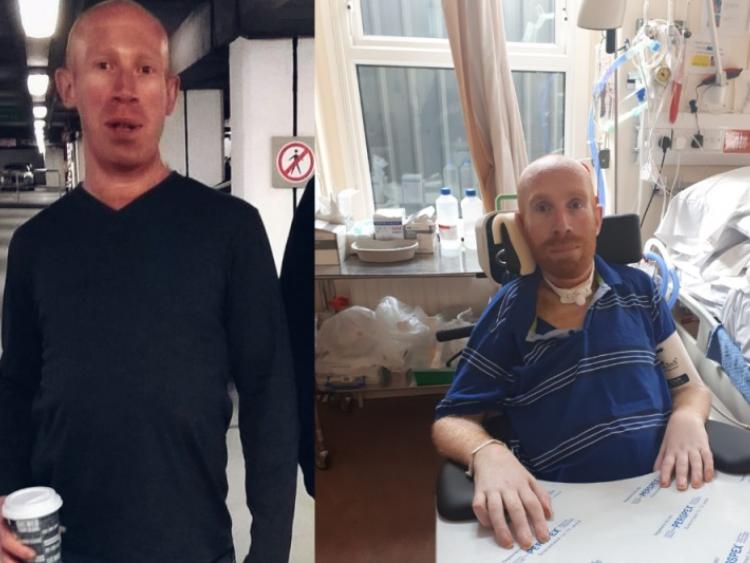 Andrew O'Malley pictured before the accident and recently in the National Rehabilitation Hospital.

A massive fundraising drive has been launched to a ensure a Leitrim man, who sustained life-changing injuries in a freak gym accident in 2016, regains his independence.
32-year-old self-confessed fitness fanatic, Andrew O'Malley was left paralysed after a freak accident while exercising in December 2016.
The accident resulted in damage to his C3 neck vertebrae, severing Andrew’s spinal cord and leaving him only able to move his head, neck and part of his shoulders.
After initial treatment in Sligo University Hospital he was moved to the Mater Hospital in Dublin and then, transferred to the National Rehabilitation Hospital in Dun Laoghaire on June 14, 2017.
Andrew, who grew up just a few miles outside of Mohill, then began the process of preparing for his discharge planned for the following September. However he remains in the NRH nearly 7 months after his discharge date because there is simply nowhere for him to go.

Despite the number of young people who suffer catastrophic spinal injuries in this country, there is no residential nursing home for young people to move to on their discharge.
Unless their families have the ability to provide highly specialised, expensive care in their own homes, young people are often forced to move into nursing homes which are specifically designed for geriatric patients, not young people like Andrew, who want to be able to live as independently as possible.
Andrew's injury has resulted in seriously weakened lungs and he is very susceptible to chest infections and requires regular medical intervention to clear his airways. As part of his treatment he has a tracheotomy for emergency intervention.
Andrew also has autonomic dysreflexia, a condition which develops in those with spinal court injuries resulting in acute, uncontrolled high blood pressure. Andrew's swallow reflex is also very weak and his windpipe does not always close when he swallows. Because of this there is potential that he will choke on food or even his own saliva.
Andrew's parents are in their 70s and are unable to provide the highly specialised care he needs and, further complicating matters is the fact that Andrew's medical needs are such that, to date, no nursing home has come forward to say it is prepared to take on Andrew's care.
He has effectively been left stranded in the National Rehabilitation Hospital.
As a result of his effective 'discharge' his access to supports such as physiotherapy has also been curtailed. Prior to discharge he was getting more than 6 hours of physiotherapy a week, now he gets just 1.5 hours.
An application has been approved for funding for accommodation under the Fair Deal Nursing Scheme, but the family are still waiting for a placement.
Andrew and his family are, understandably frustrated by the situation, but Andrew remains hopeful that he will find a place in suitable accommodation and is determined to regain his independence.
Speaking to the Leitrim Observer through his family, Andrew said he remains extremely hopeful for the future.
At the time of the accident he had been due to start a course in Tourism and Hospitality and he said that he hopes to return to college and eventually on to full-time work. He dreams of finding somewhere he can live as independently as possible and is focused on reaching his fullest potential, regardless of the challenges he faces.
Andrew's sister, Emma McCabe, said their family had been devastated by Andrew's injury, but were amazed at his positivity and determination to take back control over his life.
“He has remained so positive all along. We don’t know how he does it. We should be the ones being positive for him and dragging him along with us but the reality is that it is Andrew who is the positive one, he’s convicting us he will get back to normal. It will be a new version of normal, but he’s determined to get back out there, to live a full life.”
She says the real frustration has been that, although Andrew is entitled to receive support and accommodation, this still hasn't become a reality.
“He's really stuck at the moment. It is so frustrating,” admitted Emma.
“He is entitled to all these things but he hasn't been given them. He is still at the National Rehabilitation Hospital, where the staff are wonderful, but he wants to move to the next stage, to get a place where he has privacy and the services he needs to get some real independence back. That's what he wants, that's what we want for him.”
A gofundme page - https://www.gofundme.com/andrewomalley - has been set up and has already raised €22,625 in just 29 days towards providing much needed technology, physio and other therapies that Andrew will require going forward.
Emma said the gym where he sustained his injury had no insurance and is now closed with the owner allegedly leaving the country, closing off the avenue of compensation.
However, the sheer volume of donations and kind messages of support following the launch of the gofundme page has “stunned” the family.
“They (the messages and donations) are really doing Andrew the world of good,” said Emma.
“For him to know that so many people out there are supporting him, are willing him on... it has made a huge difference to us all.”
Last week Andrew was interviewed for Prime Time and his story has also featured in a number of national media outlets.
The HSE has confirmed that an application for Fair Deal Nursing home funding has been approved however “due to his considerable care needs the only service locations available to accept him requires a nursing home 'top up' payment,” said the HSE.
The HSE said two service options are being considered for Andrew and added they are progressing the purchase of a motorised wheelchair for Andrew.