The tale of Leitrim's own Loch Ness Monster - the Dobhar-Chú 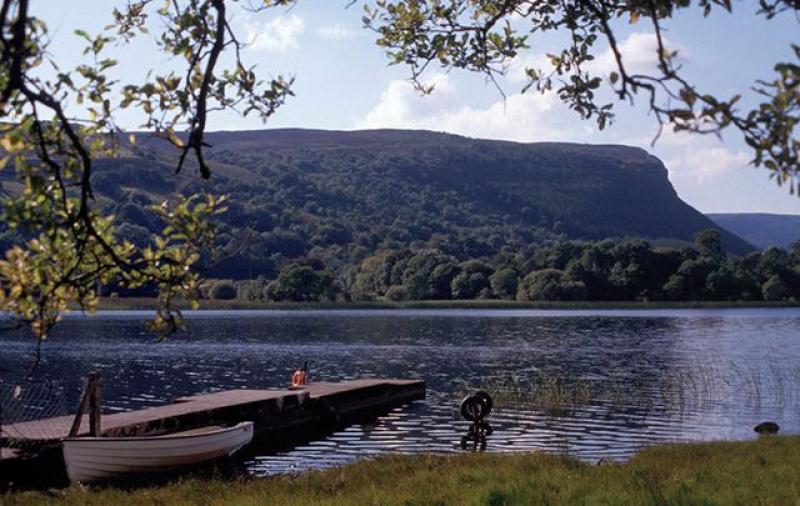 A small graveyard in North Leitrim plays an unlikely role in a tale of monsters and murder dating back to the early 1700s.
While no written records of this story date back to this period a strong oral tradition has brought the story of the Dobhar-Chú - the fearsome water hound of Glenade Lough - to the modern age.
While there are small differences in the stories told in the area, they all recount the horrific murder of Grace McGloighlin in 1722.
It is her death which is recorded in relief on a worn headstone in Congbháil (Conwall) Cemetery in the townland of Drumáin (Drummans) in the Glenade valley.
The stories centre on the fate of Grace McGloighlin or who was locally known by her maiden name of Connolly.
Drawing from recounting of the legend by James Roonian (born about 1870), of Sracleighreen and Owen McGowan, Ahanlish, Kinlough it is possible to recount the story of the Dobhar-Chú.
Both versions agree that Grace lived in the townland of Creevelea at the north-west corner of Glenade Lough.
One day she went to the river to wash some clothes and, failing to return that evening, her husband Terence went looking by the lough shore.
Tradition has it that he found her bloody remains with the Dobhar-Chú asleep on her breast.
James Roonian's version, recounted to Patrick Tohall in the 1940s, details how Terence “returning to the house for his dagger he stole silently on the Dobhar-Chú and drove the knife into its breast. Before it died, however, it whistled to call its fellow.”
Terence was forced to flee with the animal in pursuit. 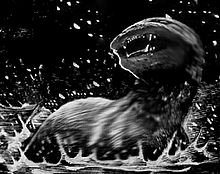 Roonian's version says Terence was joined by a second man and “realising that they could not shake it off they stopped near some old walls and drew their horses across an open door. The Dobhar-Chú rushed under the horses' legs to attack the men, but as it emerged from beneath them one of the men stabbed and killed it.”
While the stories themselves could be dismissed as folklore, the fact that an actual gravestone exists, purporting to be that of a victim of the Dobhar-Chú, seems to add at least some credence to the tale.

The gravestone and the Dobhar-chú 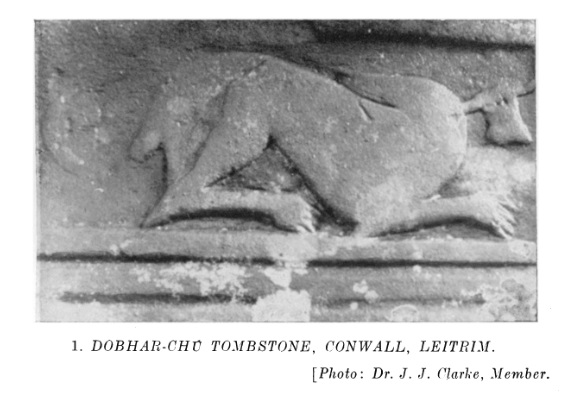 In 1948, Patrick Tohall published a paper entitled:“The Dobhar-Chú Tombstones of Glenade, Co. Leitrim (Cemetries of Congbháil and Cill-Rúisc),” in the Journal of the Royal Society of Antiquaries of Ireland.
At the time of publication in 1948 Tohall had visited the so-called Dobhar-Chú gravestone in Conwall Cemetery on at least two occasions between 1935 and 1948.
He detailed the decredation of the stone over that 13 year period but the surface of the sandstone has suffered further wear from the elements and overzealous tourists down through the last 200 years.
The bottom corners of the headstone - which lies on the ground - have broken off and much of the lettering, visible even 70 years ago, is no longer legible.
What is still visible is the image of a strange, dog like creature - the Dobhar-Chú of legend. The paws are unusually large and the head and small ears are very much like that of an otter.
In 1948 Tohall described it noting: “The head and neck are bent backward to lie flat on the animal's backbone. A human right hand, clenched and with fingers facing the spectator, is shown holding a weapon which has entered the base of the neck and reappears below the body in a short stem which suddenly enlarges to finish as a barb.
“It appears a fair assumption that the slab was sculptured while the woman's death was still fresh in human memory as similar tombstones in raised lettering in this cemetery and in Cill-rúisc are characteristic of the period 1722 to 1760.”

The gravestone is till there today, visible amongst the grass and set against the backdrop of the lough where this bloody tale was borne out.