Ireland holds longest unbroken record of peacekeeping in the world

The Irish Red Cross is set to bestow a very special honour on the Irish Defence Forces at the IRC Humanitarian Awards Ball . 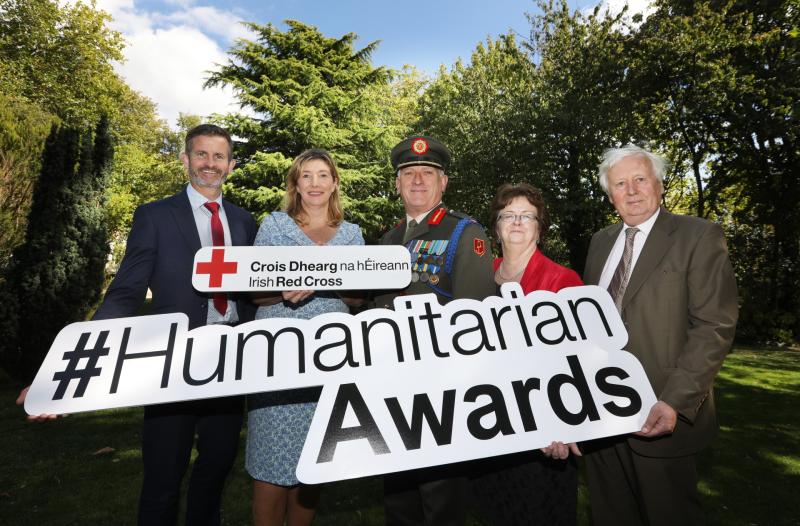 Pictured at the launch of the Humanitarian Awards.

Ireland holds the longest unbroken record of UN peacekeeping service of any nation in the world and this remarkable achievement will be recognised when the Irish Red Cross bestows a very special honour on the Irish Defence Forces at the IRC Humanitarian Awards Ball in November.

Óglaigh na hÉireann personnel were first deployed to Lebanon on UN peacekeeping operations in 1958 and over the last 60 years have completed almost 70,000 individual tours of duty in Lebanon with 87 members paying the ultimate price in the cause of peace.

The Irish Defence Forces will be one of several award recipients at the Irish Red Cross Humanitarian Awards Ball where presentations will also be made to winners of six other categories including Humanitarian of the Year and the Corporate Impact Award. The closing date for nominations, which can be made at ball.redcross.ie, is Friday, 5 October.

The Irish Defence Force’s present day deployment with UNIFIL in Lebanon is due to residual tension in the region which dates back to the Israeli invasion of Lebanon in 1978. Irish personnel currently on the ground are engaging in mobile patrolling throughout the Irish area of operations including ground-holding, monitoring the Blue Line, and humanitarian operations. Operations are conducted on a “high visibility, low profile” basis.

Óglaigh na hÉireann Chief of Staff Vice Admiral Mark Mellett DSM says; “our reputation as fair and impartial brokers, dedicated to the common purpose of supporting peace in South Lebanon is built upon the work, dedication and sacrifices of successive Irish contingents since 1978. The 70,000 individual tours of duty completed by Irish Defence Forces personnel have not been without great sacrifice. It is appropriate to remember the 87 members of the Defence Forces who have died in the service of international peace including the two soldiers who remain missing in action, one in Congo and one in Lebanon.”

Brigadier General Peter O’Halloran will be Chairperson of the adjudication panel at the Irish Red Cross Humanitarian Awards Ball. He is joined on the panel by Professor Hannah McGee, Dean & Chief Academic Officer in RCSI and several Irish business leaders; Julie Sinnamon, CEO of Enterprise Ireland, Mary Rose Burke, CEO of Dublin Chamber, Liam O’Brien Director of Strategy & External Affairs Vodafone, Dr Niall Holohan, Chamber of the Arab Irish Chamber of Commerce and Derry Gray, Partner in BDO. The Brigadier General notes; “I am absolutely delighted to be a member of the adjudication panel for the Irish Red Cross Humanitarian Awards 2018. In my time in service where I have spent ten tours of duty abroad, I have witnessed, first hand, the work of the International Red Cross, where it demonstrated at all times respect for International Humanitarian Law. I have also seen, in armed conflict zones, where the Red Cross has delivered better living conditions for the less well off. The roles and the mission of the International Red Cross is seamlessly compatible with the values of the Irish Defence Forces.”