Call for urgent works to save medieval church in Annaduff 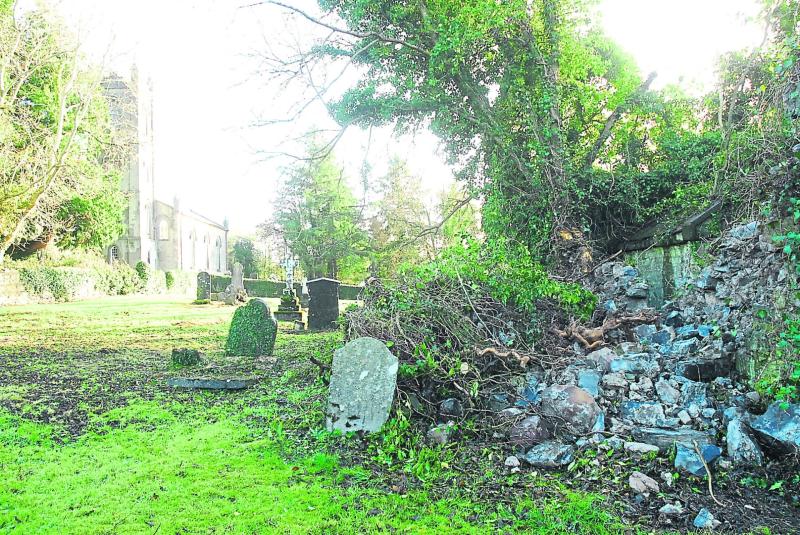 The collapsed wall at the medieval church in Annaduff.

Independent councillor, Des Guckian, is calling on the National Monuments Service at the Department of Heritage, Culture and Gaeltacht, to immediately take steps to secure the remains of a medieval church in Annaduff after it was damaged during a recent storm.
The site of the church in St Anne’s Graveyard was extensively damaged after trees, rooted through one wall, caused a part of the structure to collapse.
Speaking to the Leitrim Observer at the site of the medieval church, Cllr Guckian said that the entire area was of great historical importance with the medieval building and present St Ann’s Church of Ireland part of a wider ancient abbey site.
“The ancient Abbey of Annaduff was a thriving and very important abbey on the River Shannon when High King, Brian Ború, visited here in the year 1010. It was second only in importance to Clonmacnoise along the Shannon,” he pointed out.
“This medieval church was built on the abbey site about the year 1400. History records that some of the stones from the (original) abbey church were included in this church. Therefore it is of huge importance in a heritage sense.
“Following the building of the present St Ann’s Church of Ireland in 1815, the medieval church was abandoned as a church, but the local landlord, Matthew Nesbitt, got to build a family vault inside its ruins. This was a reward for his exertions in building St Ann’s. (The medieval church was declared a National Monument with a preservation order attaching).
“In recent years, tall ash trees began to grow on top of the walls, with their roots running down through the weakened walls. Two years ago, a local group invited representatives from the Department of Heritage to come and see how precarious the situation was. They ignored the situation,” he said.
“A month ago a big storm blew some trees down and the north wall was demolished. The danger now is that the other three walls will also be blown down in the next big storm, causing great damage all round.”
This has also led to serious health and safety concerns for those using the public graveyard as a number of stones have been loosened by root ingress.
A number of graves located near the base of the medieval ruin have also been damaged by the wall collapse and more, including the historic grave of Prince of Breifne, Bryan O'Rourke (1690-1767) and his wife Margaret, are at risk of damage if urgent works are not carried out to secure the remaining structure.
Cllr Guckian pointed out that archaeologist, Susan Curran, has carried out a survey in the big field adjoining the graveyard and her findings concluded this was, indeed an important ancient abbey site.
Cllr Guckian said the lack of action by the Department of Heritage in securing the medieval church remains is very frustrating, especially in light of the historical importance of this site.
“The Department of Heritage can certainly be blamed for not being pro-active and helping out by having the trees cut down,” said Cllr Guckian. “Placing a preservation order on a monument should also carry with it an obligation to help preserve the building.
“This is a cross-community issue and many are showing an interest. It would be great if all parties and the Department of Heritage, could work together to help save what is left and finish out the archaeological surveys (on this site).”
He added that he hoped the new Heritage Officer in Leitrim County Council will come on board and work with the local community to help secure this site and get proper surveys completed.
“It is vital that this historic site be saved and preserved for future study,” he said. 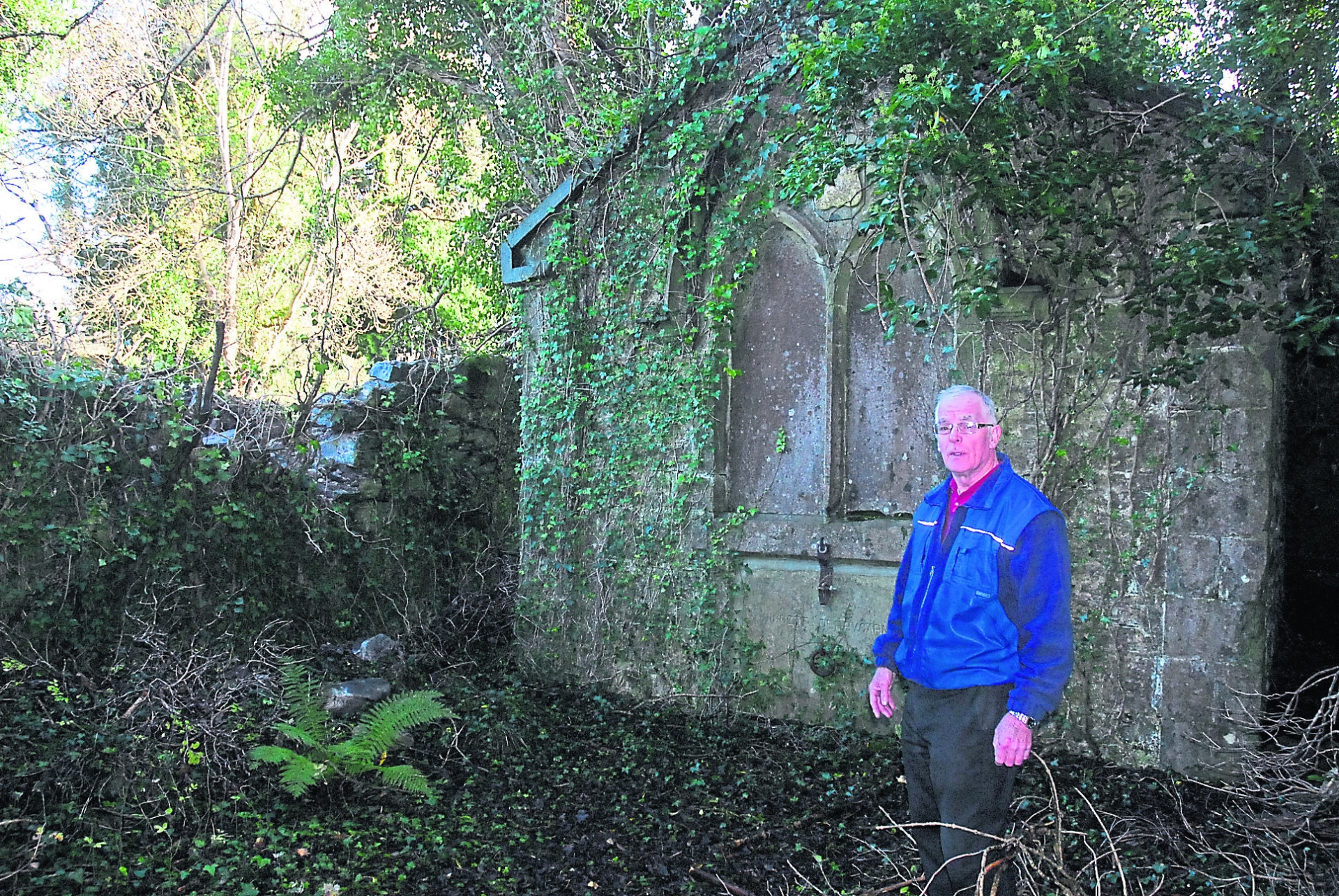 Cllr Guckian at the Nesbitt mausoleum.

Response from Department
The Leitrim Observer contacted the Office of National Monuments to highlight the damage to the medieval church.
A spokesperson for the Department of Culture, Heritage and Gaeltacht confirmed the medieval church is a protected monument under the National Monuments Acts 1930 to 2014.
“This means that any person proposing to carry out work that might affect it must give the Department's National Monuments Service (NMS) two months advance notice in writing,” said the spokesperson.
“The Minister or Department does not have responsibility under the National Monuments Acts for the maintenance of the monument as it is not in State ownership or in State care.
“Our understanding is that the church is not owned by the local authority either and consequently Leitrim County Council would also not have any statutory obligation for its maintenance.”
While it was accepted that it clearly poses a structural risk, “inappropriate removal would be equally hazardous to the structure.”
The National Monuments Service has suggested the community should engage appropriate architectural conservation expertise with a view to preparing an appropriate scheme of conservation works. To date, said the spokesperson, the Department has not received any notification of, or refused permission for, any proposed works.”
The spokesperson noted that there were financial supports available or the protection of heritage buildings or historic structures - the Structures at Risk Fund (SRF) and the Built Heritage Investment Scheme - both of which are administered by local authorities.
“The SRF has been revamped and improved for 2019 and will become the Historic Structures Fund. This fund will be launched shortly and will be open for applications later this year, together with BHIS.
“It would be open to Leitrim County Council to consider applying for funding for Annaduff (medieval) church under these schemes,” concluded the spokesperson for the Department.