Remembering the events of 1798 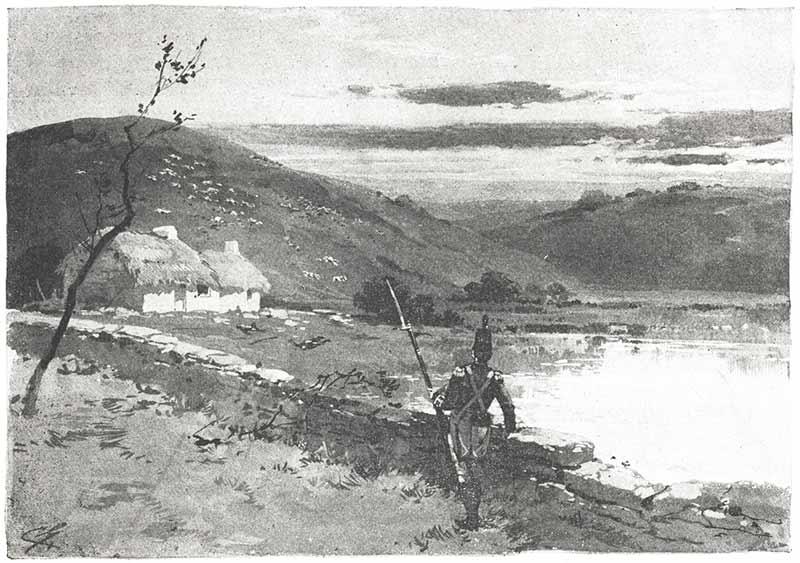 Gory Heights, Ballinamuck. Image courtesy of the Library of Ireland.

In 1998, I published a booklet called Leitrim & Longford 1798. The launch was held in Creegan’s of Cloone. This is on the site where the Irish/French army rested on the eve of the Battle of Ballinamuck.
That fateful Battle was fought close to the village of Ballinamuck on 8 Sept 1798. It went down in Irish history as the last great pitched battle to be fought in Ireland.
Richard Hayes and Thomas Pakenham had written formal histories about ’98. I acknowledged both as sources for the broad outline of the campaign, from the landing of 1,000 French soldiers, near Killala, to their surrender at Ballinamuck.
I sought to look at what happened from the point of view of those local Irishmen who played a brave and vital part in that 1798 uprising. Their stories were handed down from generation to generation and so became the stuff of folklore. I tapped into that folklore and included many, many really stirring stories.
In the late 18th century, a new revolutionary spirit was sweeping through America and through Europe. In Ireland, two years after the start of The French Revolution, Wolfe Tone set up the United Irishmen, an organisation devoted to bringing together Protestant, Catholic and Dissenter and they swore that they would take on the might of Britain, the never-failing source of all their woes. Ranged against them were the regular British army, yeomen who were descended from the conquering armies of a hundred years previously, and poorly trained militia groups raised by local landlords.
General Cornwallis, the Viceroy of that time, led the massive British army which encircled the 1,500 strong French/Irishforce on the hill beside Ballinamuck. This was the same General who, in 1781, was forced to surrender to George Washington when the US decided that they wanted to cut loose from the clutches of Britain. The French decided that they too had enough of kings and of cruel, despotic nobles. They applied the guillotine to as many aristocratic heads as they could find. Eventually, Napoleon came to the fore. He had hoped to invade Britain, but this never happened. Ireland was regarded, by some strategists, as the way to attack Britain by the backdoor. The British authorities prepared Ireland for the inevitable. In December 1796, the British had a miraculous let-off when a large French fleet carrying 15,000 troops, under General Hoche, just failed to land in Bantry Bay. Like the Spanish Armada in 1588, the French were blown away by a massive storm.
The Castle authorities in Dublin knew that a national rising was planned by the United Irishmen. Early in 1798, they arrested the leaders in Dublin and Lord Edward Fitzgerald died of wounds received while avoiding arrest. The notorious General Lake, through shooting, torturing and hanging suspects, led a policy of completely illegal repression in Leinster and Ulster. In Wexford, Fr John Murphy, a declared loyalist, horrified by the repression, rose out and led a rebel army. They were defeated and he and other leaders were executed. The mostly Presbyterian uprisings in Down and Antrim were similarly and cruelly suppressed.
North Mayo was a most unlikely spot for a French landing. They soon took Killala and had a most emphatic win to take Castlebar. Hundreds of rebel volunteers gathered in to support the French. They included disenchanted landlords, former yeomen, land agitators and a group of weavers who had recently been expelled from Ulster during a pogrom.
General George Blake, from Mayo, became leader of the Irish. They fought with reckless courage. The French troops were battle-hardened and they won battle after battle as they crossed eastwards through North Connacht and southwards through Co Leitrim.
On hearing of the approach of several encircling British armies, The French/Irish fled from Castlebar early on 5th September and reached Ballinamuck on the 8th. It was a journey of over 100 miles. They were constantly under attack and there was little time to rest or sleep.
At Cloone, they rested for a few hours, but when they were about to set out again they could not find the chains for drawing the few cannon guns they had left. Some of their cannon guns were thrown into Keeldra Lake. General Lake was close on their heels and Cornwallis was closing in from the Gortletteragh side.
A short but very fierce battle was fought on Shanmullagh Hill, above the village of Ballinamuck. Gunner McGee was the most distinguished fighter on the Irish side. After they surrendered, the French were granted good terms and protection. The Irish were attacked and every attempt was made to slaughter them all. They fled in every direction, particularly towards the west. General Blake was captured and executed.
The Irish were pursued and slaughtered wherever they went. Mass hangings took place at Ballinamuck, at Ballinalee and at Carrick-on-Shannon. There were great tales of both courage and of humanity recorded. The upshot of it all was that, post 1798, the Irish were more repressed than ever.
One pleasing aspect of having written my book was that it brought many people together. I had included photos of descendants of people who had fought the good fight and escaped. Several people contacted me with additional information. One was that one of the bravest, Tom Gilheaney, was actually from Clogher, near Ballinamore and his home place is still there. Another was that the coffin for the remains of General Blake was made from the boards of a kitchen dresser, from a house beside where he was executed. At Durkin’s shop, in Granard, I was informed that their ancestor had come all the way from Mayo with the Irish rebels of 1798.
The memory of ’98 was kept alive in a hundred stirring songs.
Though they were defeated, there was consolation in the bravery of their efforts.
One verse states: “Forgotten the black months of horror, Undaunted by gibbet and yeos,
“Like heroes that scorn all danger, Our forefathers gallantly “rose””.