HISTORY: A suspected Dynamitard in Mohill!

Bombing campaign: Carried out by Fenians against the British Empire between 1881-1885 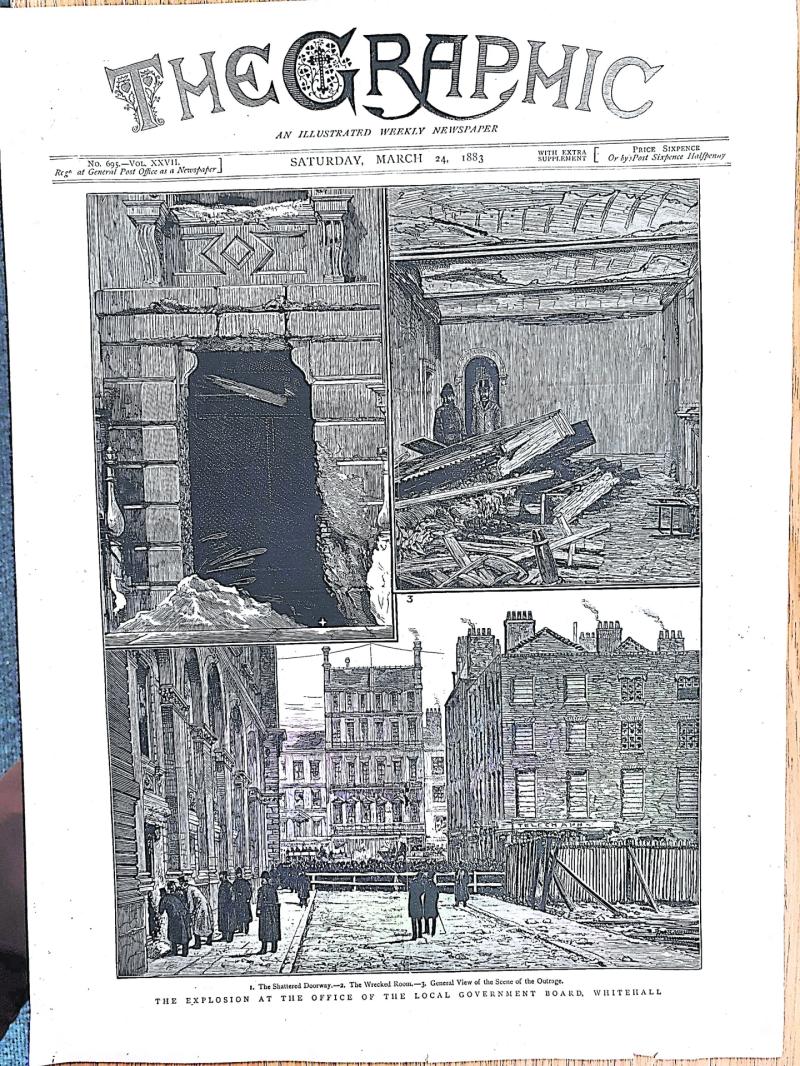 Between the years 1881 and 1885 a bombing campaign known as the Dynamite Campaign was carried out by Fenians against the British Empire.
The campaign was orchestrated by Irishmen who were exiled in the United States and led by Jeremiah O’Donovan Rossa and others. The bombings targeted police and military institutions in Britain.
It was during this time that the future Easter Rising leader Tom Clarke was sentenced to Penal Servitude for life on account of his part in the campaign.
The London Graphic Newspaper dated the 24th of March 1883 published an article denouncing the Fenians as Revolutionary Adventurers and Anarchists.
It compared them to the like minded movements in Russia, Germany and France. It called for an international league to suppress “these wretches”.
It wrote, Nations will agree to extradite burglars and forgers because they admit that burglary and forgery are highly objectionable modes of action. While each nation regards its own anarchists as monsters of iniquity, it discerns palliations and excuses for the anarchism of neighbours.
The article named the United States as being Britain’s biggest difficulty with Irish Patriots.
It is scarcely too much to say that for the agitation kept up by a small section of Irishmen in the United States the Irish in Ireland would soon settle down into a tolerable state of contentment.
It called on the American government to suppress the incendiary newspapers and to destroy the machinery, men, money and material used for the outrages committed by these people in Great Britain and Ireland.
However, the writer did not expect this to happen as he noted that while most Americans do not love this Irish element they are fond of securing the Irish vote and many of them believe that Ireland is still bound hand and foot with Penal Laws.
The article concluded with the view that the time will come for Americans - when they will regret their lack of action - when their own suffering will teach them the enormity of harbouring desperados who will make their country a trysting place for murderers.

Whimsical report
The Leitrim Advertiser dated the 12th of June 1884 contains an almost whimsical report on an incident in Mohill that occurred as a result of the paranoia that gripped the police force at the time.
“On Friday last an Irish American visited Mohill and engaged a suite of rooms at Mr Burn’s hotel.
“Notwithstanding that he did not carry a carpet bag, yet he seems to have excited the suspicion of members of the Royal Irish Constabulary and the proper authorities were communicated with and a warrant to search and arrest were procured.
“On Monday morning the visitor’s appetite for hot tea, chops and tomato sauce was somewhat destroyed by the entrance into his breakfast room of the District Inspector accompanied by the Head Constable.
“So shocked was the supposed Dynamitard that the cup of tea which he was in the act of raising to his lips dropped from his hand, obliterating the whiteness of the table cover and reassuring his would be captures.
“Being informed of the nature of their visit the American said he was no Dynamitard and surely did no present the appearance of a dangerous character, that having retired from business he visited the land of his birth for pleasure.
“He had travelled France, a good part of England and Ireland and had not been interfered with until he came to his native place.
“He warned the officers of the law that he was an American citizen.
“Having been informed that the law under which they acted referred to Americans the Inspector and his Head Constable were given every facility in their search but found nothing.
“The gentleman, who seemed to feel the indignity is named Peter Flynn of Brooklyn originally of the parish of Cloone who emigrated to America thirty seven years ago, where, by persevering, industry and attention to business, amassed a considerable fortune and is now retired and enjoying the fruits of his labour.”
Sources: The Graphic Newspaper March 1883, The Leitrim Advertiser June 1884, courtesy of the Leitrim Observer.