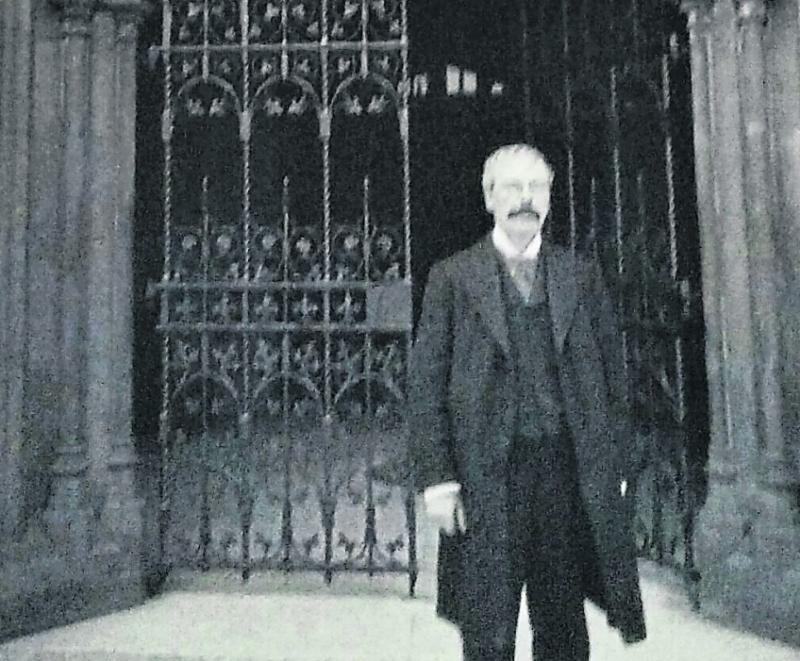 Jasper Tully was born in 1859. His family founded and owned “The Roscommon Herald” newspaper in Boyle. Following the death of his father, Jasper, together with his mother took over the running of the paper.
He was an ardent Nationalist, and a supporter of Charles Stuart Parnell and tenants rights. He even spent time in Kilmainham jail with Parnell. However, in the 1892 election he ran on an anti-Parnellite ticket winning the seat for the Leitrim South constituency. He was to remain an M.P. until 1906.
Tully’s supporters celebrated the election victory with bonfires and it was decided to hold a torchlight procession in his honour. Sods of turf, soaked in Kerosene were place on pitchforks and when a light was applied to the turf there was a loud explosion and several people were seriously injured.
Despite many warning to the public, this was not an uncommon incident at the time especially with lamps in houses due to inferior oil products.
The newly elected M.P., together with others raised the issue of the dangers of low standard imported Kerosene in the House of Commons. The Government did what most governments do in such a situation. They set up a commission that included Jasper Tully as a member.
It sat for many years and heard evidence from people involved in the petroleum industry. One such person who gave evidence was a Mr E.R. Jordison. (More about him later.) Thanks to the deliberations of the commission and accumulated evidence of the experts the explosion of Kerosene products became almost non existent, with sales increasing dramatically.
Fast forwards to 1930, the Leitrim Observer announced that a new motor fuel had made its appearance in the county when a large transport lorry and trailer replete with barrels passed through Carrick-on-Shannon on its way to make the first delivery to Mr McGreal in Drumkeerin.
The new fuel was marketed by Russian Oil Products Ltd, known as R.O.P. Spirit. The general manager of this new company was Mr E.R. Jordison who had, years earlier, given evidence to the Petroleum Commission in the British House of Commons on which Jasper Tully M.P. was a member.
As he served as an M.P. for the constituency of South Leitrim, Jasper Tully worked hard for the public both locally and at a national level. In Parliament he raised such issues as the rights of tenants and political prisoners. He furthered the cause of the Irish language.
He was very involved in the Gaelic Athletic Association.
He also raised topics of local interest to his constituents such as Tenant drainage charges on the Rinn and Blackriver District, Sunday postal deliveries in Hillstreet and cattle trespassing on the footpaths in Drumsna.
Tully was one of the most colourful characters of his time and his turn of phrase and responses are the stuff of legend.
On one occasion when the Black and Tans threatened to burn down the Roscommon Herald works in Boyle, his reply to them was “Go ahead, I have it well insured with a good English company”.
His constituency office in Carrick-on-Shannon was in the premises of Mrs Ellen Feely, Main Street. (beside the present day Allied Irish Bank). Mrs Feely provided accommodation for lodgers and was the great grandmother of John Feely the current Assistant Chairperson of the local Historical Society.
During the tenure as an M.P. Jasper Tully was instrumental in assisting the only daughter of Edward King-Harman when she was disinherited following the death of her father, because she married a Roman Catholic, namely Sir Thomas Stafford.
He brought about this through his friendship with Tim Healy, another Irish M.P. who introduced Tully to Edward Carson, one of the best lawyers of the time. Tully, who had never met Carson, introduced himself to him “as an old Fenian and an old Rebel to plead for the daughter of my biggest enemy”. Carson drew up the legislation in Parliament for Tully and Miss King Harman had her rights restored.
Jasper Tully died in 1938.