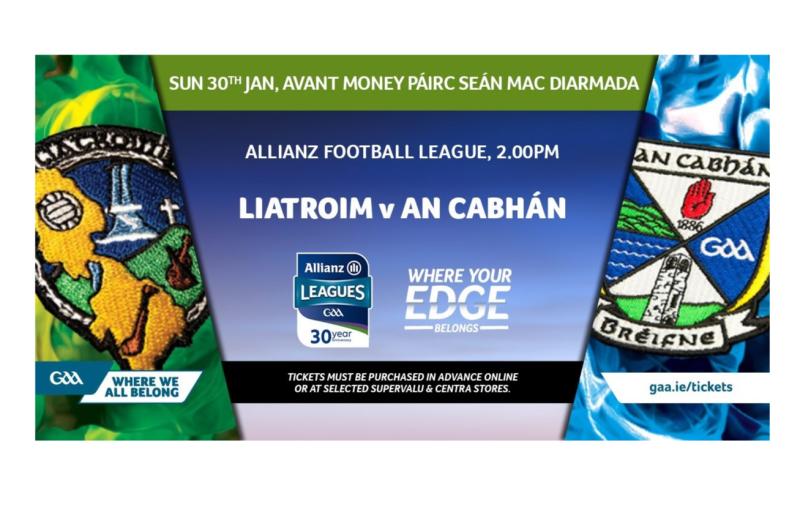 Make sure you purchase your ticket in advance or you won't get in to Avant Money Pairc Sean Mac Diarmada is the message to fans hoping to attend next Sunday's clash of Leitrim and Cavan in the opening round of the 2022 Allianz NFL Division 4 campaign.

As the GAA move to a strictly cashless operation in respect of the Allianz Leagues in 2022, Leitrim GAA posted on their social media channels reminding all supporters that "Members and supporters are reminded that all tickets for games must be purchased in advance of arrival at our grounds."

With new manager Andy Moran leading Leitrim into action for the first time in League action, there is huge local interest among Green & Gold supporters while 2020 Ulster champions Cavan are expected to bring a big crowd with them as they seek a quick exit from Division 4 following their shock relegation last year.

Leitrim GAA have announced that tickets are available at the following locations:

Tickets can be purchased online HERE

Supporters are reminded ahead of the start of the Allianz Leagues that all tickets for games must be purchased in advance.
Tickets can be purchased online via https://t.co/P7yZehyWNZ and from selected Centra and SuperValu stores. Tickets will not be sold at match venues." pic.twitter.com/F2WMN7Jqc8

The new ticketing arrangements also mean that Leitrim fans intending on travelling to the away fixtures in Thurles, Carlow, Waterford and Sligo must purchase their tickets in advance.

DEADLINE FOR VOTING IS 5PM ON THURSDAY FEBRUARY 3, 2022
ADVERTISEMENT - CONTINUE READING BELOW