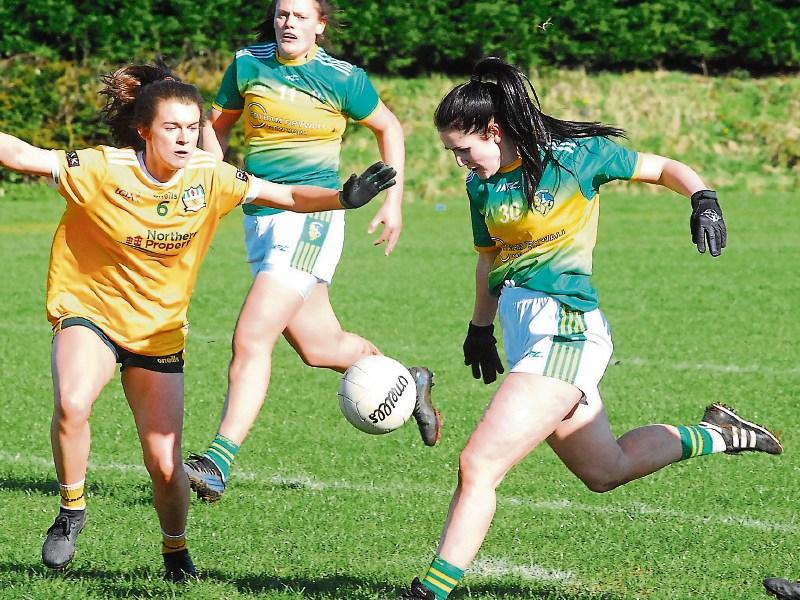 Roisin Fowley shoots for a first half goal for Leitrim against Antrim Picture: Willie Donnellan

An experimental Leitrim needed a late, late equaliser from sub Sarah Reynolds to maintain their unbeaten run in the Lidl LGFA National League as Antrim came so close to causing a sensation in Sunday’s Division 4 clash in Pairc Sheain Ui Eslin in Ballinamore.

Leitrim, who trailed by six points at one stage, had the chance to steal the victory only for Michelle Guckian to see her late free from 20 metres out hit the woodwork and rebound wide. That would have been tough luck on an Antrim side who certainly deserved to take something from the game as they took the game to the home team.

Leitrim, who played most of the final quarter with 14 women after keeper Niamh Ryan was sin-binned, fielded a number of players who had only seen limited action in this year's campaign but it would have still been considered a strong line-up with all of the players having extensive experience.

Leitrim got off to a reasonably good start but the lack of the normal cohesion in Hugh Donnelly's side at times was probably a cause for concern.

Leitrim settled down quicker at the start with points from Roisin Fowley and Shaylyn Ward in the opening six minutes. But then Antrim took the lead for the first time when Grainne McLaughlin banged home a seventh minute goal.

The Saffrons stretched their advantage after Orlaith Prenter fired over two minutes later. Leitrim got on level terms during the next four minutes when Michelle Guckian pointed a free and Fowley split the Antrim with a well taken effort.

Leitrim went back in front after Fowley found the net on 14 minutes but Michelle Guckian hit the woodwork and Antrim defender Maeve Mulholland made a good save from another effort. two points from Prenter either side of the water break cut the Leitrim lead to a point.

Ailish Cornyn & Guckian points put Leitrim three in front but a Caitlin McTaggart goal within a minute tied the scores before Antrim powered ahead thanks to a 27th minute Cathy Carey free.

Carey (free) and Grainne McLaughlin fired over Antrim points to increase the visitors' advantage. A well executed solo-run by Maria O'Neill near the short whistle, enabled her to drive through the Leitrim rearguard to fire home an unstoppable shot, which put the visitors comfortably ahead by 3-6 to 1-6 at the interval.

Immediately after the restart Antrim increased their advantage to seven points when Prenter shot over. Leitrim responded in a determined fashion over the next 19 minutes when they held Antrim scoreless and hit 1-2 without reply, closing the gap to two points.

Substitute Leah Fox fired home a goal while another sub, Carla La Guen chipped in with a point, as did Michelle Guckian.

Leitrim suffered a blow when, just prior to the game's second water break, Leitrim goalkeeper Niamh Ryan was sin-binned after a foul on Antrim's Cathy Carey just outside the 13-metre line. Carey punished this foul when she tapped over the resultant free to put Antrim ahead by 3-8 to 2-8.

When the final quarter's exchanges resumed Leitrim surged and got on level terms by the 57th minute thanks to Michelle Guckian who hit over two frees and sub Laura O'Dowd who added a point from play.

A terrific reflex save from Antrim goalkeeper Anna McCann denied a goal bound Laura O'Dowd effort. As the game went into added time Antrim won a 25 metre free well on the right wing, which Cathy Carey cooly slotted over from an acute angle to put the visitors into the lead.

About three minutes later, Leitrim sub Sarah Reynolds replied soccer style with a point, which just crept over the Antrim crossbar, to put the game into deadlock for a fourth and final time.

Leitrim had a chance to sneak a victory near the death and some six minutes into added time when a Michelle Guckian 20-metre free hit the Antrim upright close to the final whistle.