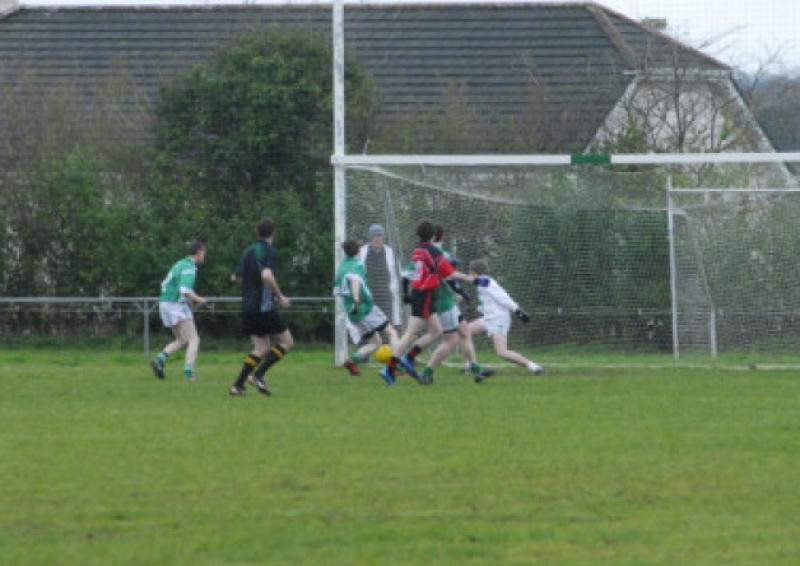 Ryan O’Rourke set the tone for a rampant Fenagh St. Caillin’s in last Saturday’s Minor League 11-a-side Final against neighbours Aughnasheelin, scoring 1-2 in the first four minutes in Mohill to set the Red & Black well on the road to victory.

Ryan O’Rourke set the tone for a rampant Fenagh St. Caillin’s in last Saturday’s Minor League 11-a-side Final against neighbours Aughnasheelin, scoring 1-2 in the first four minutes in Mohill to set the Red & Black well on the road to victory.

O’Rourke’s movement and execution of the game’s simple skills marked him out as the game’s most effective talent but the reality was that St. Caillin’s vastly out-classed their neighbours in a game that was never truly a contest.

Although classified as an 11-a-side Final, both teams fielded nine players as Aughnasheelin had just nine players and Fenagh agreed to play at that level but such was Fenagh’s dominance that the numbers made little difference.

O’Rourke went on to score 3-6 of Fenagh’s total as he was the cutting edge of a dominating Fenagh performance with Aaron McLoughlin, Ronan Ellis, Tony Simms, Richard Heaney and Shane Doonan all putting in stellar displays.

Aughnasheelin were never able to get going, their talented forwards Fintan Fitzpatrick & Patrick Sammon not getting enough supply to cause any problems as their midfield and defence was over-whelmed.

O’Rourke got Fenagh off to a perfect start, scoring 1-2 in the first four minutes with his goal coming after good work from Aaron McLoughlin. O’Rourke returned the favour to set up a McLoughlin point but the County U-16 panellist hit another 1-2, this time in the space of two minutes, the goal coming when O’Rourke managed to divert and then fist a sideline ball past the keeper.

McLoughlin then finished off a flowing Fenagh move with a soccer-style finish as Fenagh led 3-5 to 0-0 after just nine minutes. Aughnasheelin’s Kevin McWeeney converted a free on 13 minutes but Fenagh still finished the half in style with a point from McLoughlin and an Alan Doonan goal, the sub driving home a goal after an O’Rourke free was spilled.

That left St. Caillin’s 4-6 to 0-1 ahead at halftime and it was understandable that the scoring rate slowly drastically in the second half, only three points in the first ten minutes with two for Alan Doonan and O’Rourke with a Fintan Fitzpatrick score in reply.

O’Rourke resumed his scoring with a tenth minute goal with two Fitzpatrick points in reply. Shane Doonan put over a point before Kevin McWeeney finished a long run with a consolation goal for Aughnasheelin in the last minute.

But Fenagh were not to be denied the last word with O’Rourke completing his haul with a point and then Tony Simms producing a lovely finish for a sixth Fenagh goal.