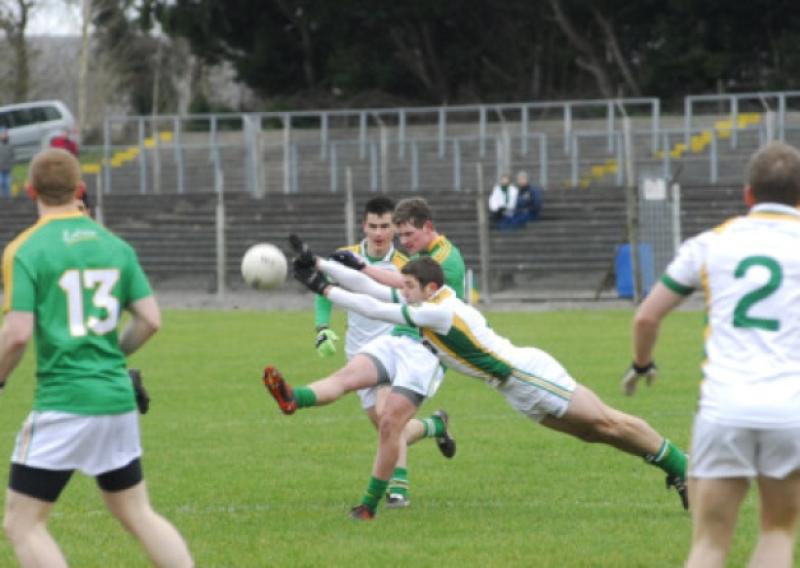 It might not have been the horror show that once saw Leitrim go scoreless for an entire half against Offaly but last Sunday’s Allianz League Division 4 loss to the Faithful county in Pairc Sean Mac Diarmada was every bit as devastating to the Green & Gold, almost certainly ending the slim promotion hopes for the year.

It might not have been the horror show that once saw Leitrim go scoreless for an entire half against Offaly but last Sunday’s Allianz League Division 4 loss to the Faithful county in Pairc Sean Mac Diarmada was every bit as devastating to the Green & Gold, almost certainly ending the slim promotion hopes for the year.

Hopes had risen after the moral boosting win in Carlow, hopes that gained further momentum after the results of Saturday’s game but the devastating loss last Sunday has almost certainly sunk Leitrim’s promotion hopes.

The controversy that erupted over an alleged spitting incident that saw Offaly’s Peter Cunningham sent off will take the majority of headlines nationally, it is the lost two points that will most concern Leitrim fans after a third defeat in four outings so far.

Although Leitrim lie just two points behind five teams locked on four points, the fact that both Clare and Offaly now have the advantage of a win over the Green & Gold leaves Leitrim in a massive hole and realistically out of contention.

What made the performance all the more mystifying was Leitrim seemed in a great position at the break, leading by a point after playing against a gale force wind. But there were concerns as Leitrim failed to take a succession of good chances, most notably when James Glancy blasted over the bar with the goal at his mercy just before halftime.

The second half was a nightmare for Leitrim as Offaly, copying what Leitrim had so successfully done in the first half, dominated the second half to deservedly win the contest to keep their promotion hopes alive as Leitrim resorted to what had failed the midlanders so miserably in the second half.

With the game as tight as last Sunday’s, incidents are easily magnified – an Offaly free early in the second half that looked wide was waved a point but equally, Offaly should very definitely have gotten a free when Gerry Hickey fouled his man, play continuing on for Sean McWeeney to score an equalising point only for the Manor man to be sent off immediately after the score!

Yet there is no denying the crucial incident was James Glancy’s missed goal opportunity just before halftime – a goal then would have given the score-board a fairer reflection of Leitrim’s first half dominance and a great platform for the second half.

What will most concern managers Brian Breen & George Dugdale was the amount of time Leitrim turned the ball over, lost possession in the tackle and generally lost their way in the second half, a failing that wasn’t confined to one particular area as crucial handling errors occurred in every sector.

There were some bright spots – Tomas Beirne make an impressive return to the team, doing well in midfield against a dominant Offaly partnership while Ciaran Egan dominated at full-back while Brendan Flynn was assured and confident in goals.

Unfortunately, bright spots were few and far between and there will be quite a deal of soul searching ahead of next Saturday’s clash with Waterford in Pairc Sean – Leitrim have not quite managed to put together a complete performance, flashes of excellence tantalising supporters but frustrating them when things go wrong.

Leitrim started confidently with Wayne McKeon dummying a defender to score on three minutes but it took a confident Emlyn Mulligan score under pressure to reflect Leitrim’s dominance after ten minutes.

Offaly, however, hit back with points from Brian Connor & Ross Brady while James Glancy was particularly unlucky to see one effort drift inches wide and another hit the post.

Offaly keeper Alan Mulhall saw a free hit the post but after a Mulligan free, the woodwork had a bigger part to play when a great move carved open Offaly’s defence with Paul Brennan being denied a goal by a great Mulhall save.

The ball fell to an unmarked James Glancy but with an Offaly defender diving full-length across the goal, the Manor men went for power but saw the ball glanced off the crossbar before going over for a point in a miraculous escape for the visitors.

They made good use of their miss as Peter Cunningham hit a fine score for Offaly, leaving Leitrim 0-4 to 0-3 ahead at the break.

Offaly were a different outfit against the wind as they reeled off three unanswered points in the first eight minutes – Brian Connor hit a well worked point and frees from Mulhall and Joe Maher, a point that looked wide from the press-box, put the midlanders three up before they brought on Niall McNamee.

Mulligan traded a free with a fine McNamee effort before converting another free on six minutes to leave a point between the teams. Yet it was still Offaly who were setting the pace and looking the team most likely.

That was until Peter Cunningham’s moment of madness – Offaly had won a free after a challenge that left the Offaly player bleeding but his reaction in spitting at Emlyn Mulligan was beyond all bounds, referee Sean Hurson immediately brandishing a red card.

The card seemed to finally inspire Leitrim and another Mulligan free, again moved in for dissent, levelled the scores with eight minutes left. But a Danny Beck foul allowed Mulhall score his third point of the day and put Offaly back in front.

Mulligan put a difficult free from near the sideline wide before came a controversial incident in Leitrim’s favour – Gerry Hickey clearly obstructed an Offaly player but referee Hurson allowed play to continue and Sean McWeeney thumped over a massive point to level the scores 30 seconds into added time.

To Offaly’s fury, referee Hurson then booked Hickey for the second time but the score stood and Hickey was off! Momentum appeared to be with Leitrim but it was Offaly who responded with a fine move that ended with corner-back Brian Darby charging through the middle for the winning score.

A desperate Leitrim tried to hit back but full-back Ciaran Egan boomed an effort badly wide as Offaly held on for a deserved win.