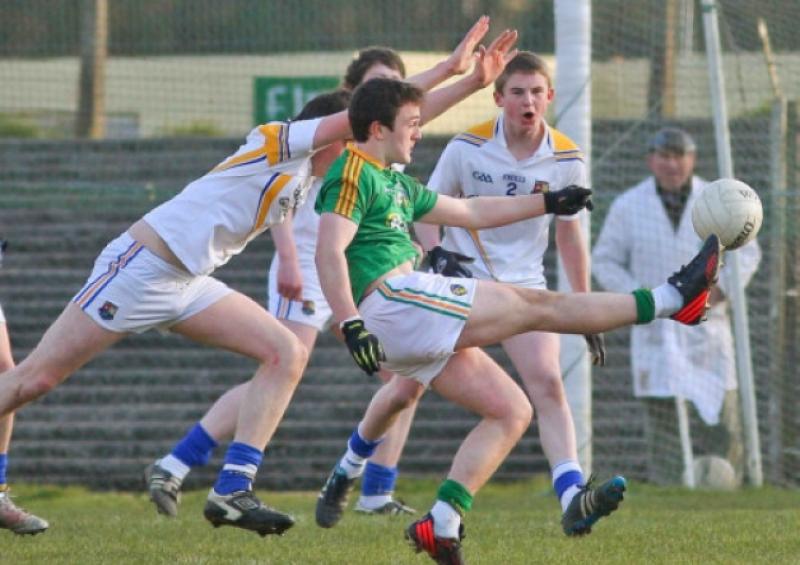 Promising performances in the opening games of the Connacht Minor League came to a shuddering halt last Saturday in Pairc Sean Mac Diarmada when a skillful Longford prove far too effective for a disappointing Leitrim.

Promising performances in the opening games of the Connacht Minor League came to a shuddering halt last Saturday in Pairc Sean Mac Diarmada when a skillful Longford prove far too effective for a disappointing Leitrim.

The big difference between the teams was obviously the three first half goals Longford plundered, one an unfortunate goal-keeping howler and two more in the space of a minute, but the truth was that Longford dominated all but the opening ten minutes of this contest and their margin of victory was not at all flattering.

Leitrim started brightly, with good movement on a team that featured quite a few changes from previous games but once Longford got the boost of a lucky goal that found its way to the net from 40 yards, they never looked back and Leitrim were left playing second fiddle.

In keeping with the trend of recent defeats for the county, it was not commitment, fitness or even physical power that made the difference, although Longford’s physical strength in key positions was used quite effectively.

No, the big difference was, as coaches like to say, purely technical – that is the execution of the game’s basic skills with Longford’s foot passing in particular much more accurate and effective than anything Leitrim could bring off. Longford’s fielding of the ball and ability to find the open man also spoke of a team that has done quite a bit of work on the basics.

Moving the ball with frequent hand-passing was all well and good once a Leitrim player was in the open but when challenged physically, the ball was often lost in the tackle and when Leitrim had to resort to kick-passing, their accuracy let them down.

This is not to denigrate this current bunch of Leitrim Minors – their willingness to work even when the game was gone from them was admirable, they never gave up and physically, there is a good deal of power in this current set-up and skill wise, more than a few players are definitely up to the mark.

The failings that caused Leitrim’s demise are more systemic and deeply ingrained and are evident in Leitrim teams at all grades – when the pressure is on, key skills fall down and that is something that has to start with the skills being taught correctly at club level. By the time many of these players get to County level, good and bad habits are already deeply ingrained and difficult to correct or improve.

Conor Gaffney looked a handful when he did get possession, Cathal McCauley fought hard, Michael Clancy reinforced the belief that there is real potential there but overall, it was a disappointing display for a team that had shown signs of promise in their first two games.

Leitrim got off to a bright start with a Cathal McCauley free and a fine Conor Gaffney point in the first four minutes but Leitrim were dealt a hammer blow when a speculative Martin Cassidy shot deceived keeper Stephen McPartland and ended up in the net – in fairness to the keeper, the shot appeared to have dropped wide and it was a huge shock to see the Green flag go up!

Leitrim hit back when Daire Farrell soloed through for a fine point but it was Longford who were dominating only for some terrible shooting to curse their increasing dominance, McPartland redeeming himself with a fine save from Patrick Farrell who was through on goal.

Patrick Kiernan, Larry Moran (2) and Cassidy (free) edged Longford four in front with four minutes of the half left before disaster struck. Referee Beirne from Roscommon missed a clear pull on a Leitrim player trying to gain possession from McPartland’s kick-out, the ball quickly finding its way to Eoin Sorohan who hammered the ball to the Leitrim net.

Less than a minute later, McPartland was picking the ball out of the net again, Leitrim lost possession out on the wing and three more rapid passes ended with Sorohan again applying a low finish to the Leitrim net.

Cassidy and Plunkett swapped frees to leave Longford with a commanding 3-5 to 0-4 halftime lead they would maintain to the finish as both teams only managed a paltry two points each in the second half. One of those points came two minutes into the second half when Leitrim put together a fine passing move involving sub Declan Daly and Luke Murphy that ended with Conor Dolan scoring a fine point.

Unfortunately, Leitrim followed up with two poor wides in the next five minutes as momentum was lost and Longford replied with points from Cassidy and Shane Kelly, Longford scoring their last with 13 minutes to go.

Leitrim added just one more point to their tally with sub Cathal Keegan firing over a massive long range effort with ten minutes to go. To their credit, Leitrim tried vainly for a face saving late goal but Luke Murphy saw a goal shot blocked and Mark Plunkett’s resulting fifty was scrambled to safety.