Ladies League hopes hang in the balance after demoralising loss 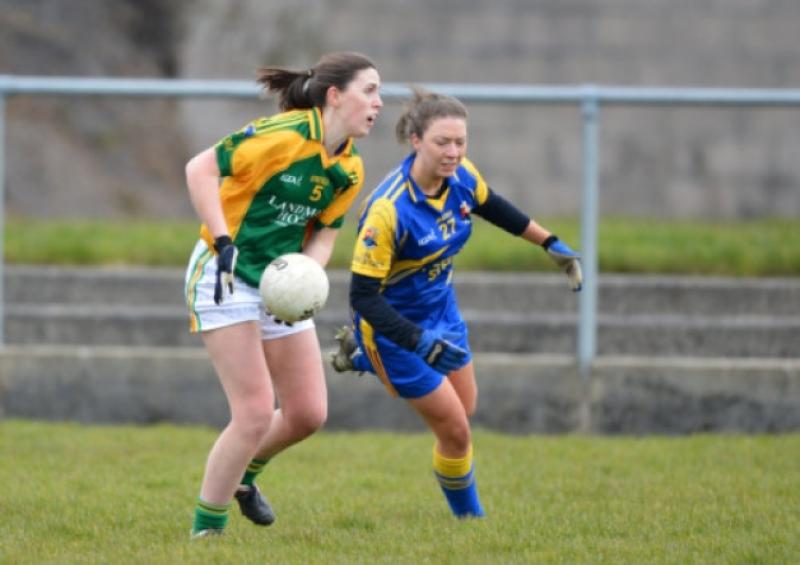 After going unbeaten for the first four games of the Tesco Home Grown Division 3 campaign, Leitrim Ladies hopes of making the semi-finals have taken two severe blows, the second of which last Sunday was a totally demoralising loss to an impressive and motivated Longford in Emmett Park, Killoe.

After going unbeaten for the first four games of the Tesco Home Grown Division 3 campaign, Leitrim Ladies hopes of making the semi-finals have taken two severe blows, the second of which last Sunday was a totally demoralising loss to an impressive and motivated Longford in Emmett Park, Killoe.

The basic outline of Sunday’s encounter would leave you scratching your head as to how Leitrim lost this game – Longford failed to score in the entire second half and had Michelle Farrell, their top scorer and free-taker, sent off on a straight card before halftime!

With a gale force wind howling down the middle of Emmett Park, Leitrim battled and battled as best they could against the wind in the first half but with an extra player and the wind behind them, you’d have expected the Green & Gold to put real pressure on the home side.

Instead, it was Longford who defied the odds with a possession game that had Leitrim players chasing shadows for most of the second half, so much so that it was Longford who created the greater majority of chances only for the absence of Farrell and the strong wind to hamper their scoring opportunities.

Leitrim did raise a late, desperate gallop in the final ten minutes with Aine Tighe seeing a shot blocked and Deirdre Ward scrapping a shot inches wide in added time but the truth was that all of the scores came from Aine Tighe frees as Leitrim just couldn’t find a way through Longford’s intense defence.

Longford, in fact, put the game beyond Leitrim’s reach in the first ten minutes as they got the perfect start, scoring six points as Leitrim struggled to get the ball out of their own half, every Longford shot seemingly going over the bar with ease – often times, the challenge playing with the wind is to convert it into the scores but after such a blistering start, Longford were off to a great start.

That Longford weren’t able to score in the second half owes a lot to the massed defence Leitrim deployed – the pressure was intense but it prevented Leitrim from building up any head of steam, the effort to simple keep Longford at bay taking its toll.

Gerry Ballantine’s side make the journey north to take on a Down side just a point ahead in the table but who are guaranteed their place in the semi-finals – it makes for an intriguing finish to the campaign.

Michelle Farrell got Longford off to a great start with a free after just 40 seconds and by the time Aine Tighe registered Leitrim’s only first half point after 12 minutes, Longford had added points from Siobhan McGowan, Emer Kiernan and Farrell, two from frees and one from play.

Tighe’s free came after a yellow card for Mairead Moore but it made little difference to the home side who continued to dominate possession yet incredibly, it was Longford who made two substitutions in the first 16 minutes before Farrell put over another free.

Farrell notched her fifth free before the impressive Sharon Treacy burst from defence on two occasions to score lovely points, putting Longford nine points clear with less than two minutes of the half remaining.

However, Longford joy was abruptly cut short when Michelle Farrell was red-carded by referee Des McEnry for a neck high challenge, leaving Longford without their scoring inspiration and giving Leitrim something of a lifeline for the second half.

Leitrim tried desperately to get back but with Aine Tighe off target on three occasions, Longford were also creating their own chances. The first score arrived on 13 minutes when Tighe converted a free after a foul on herself.

Yet it was Longford who continued to dominate with Mairead Stenson sin-binned for a foul on Claire Greene. Longford continued to waste good chances, particularly from frees, and Leitrim almost took advantage only for a desperate block by Elizabeth Brady on an Aine Tighe shot with eight minutes to go.

Leitrim took some heart from the half-chance and Tighe added another free in the last minute of normal time. Time was not Leitrim’s friend as they sought goals, the nearest coming when Aine Tighe’s last gasp shot was blocked, the ball rebounding to Deirdre Ward who, under pressure, saw her shot go agonisingly wide with the goal wide open.

To compound a disappointing day, Deirdre Ward was yellow carded over two minutes into added time as Longford held out for a deserving win.