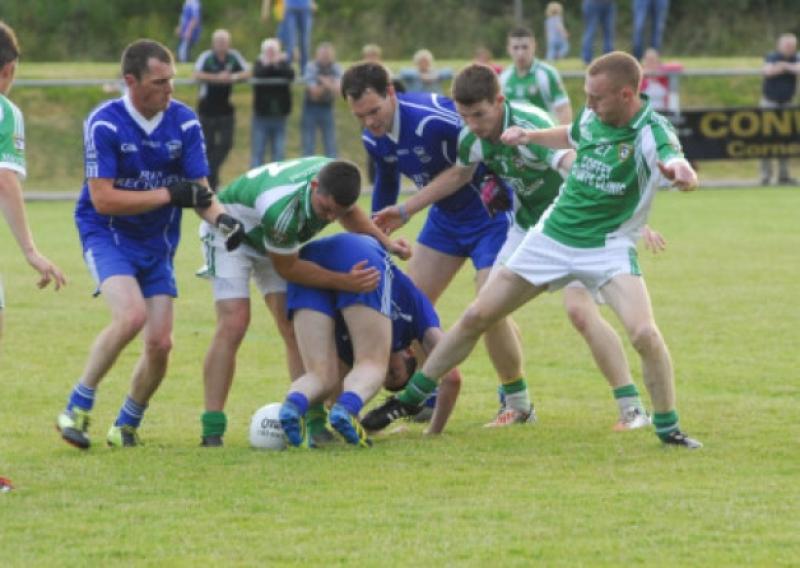 From the brink of defeat, 14 man Melvin Gaels showed their champions status to snatch an improbable draw against Mohill.

From the brink of defeat, 14 man Melvin Gaels showed their champions status to snatch an improbable draw against Mohill.

The dismissal of County player Brendan Brennan ten minutes from halftime and the loss of the equally influential Stephen McGurrin through injury seemed to spell the end for the champions but they rallied from a four point halftime deficit to snatch a deserved draw.

And it could have been even more as Peter McGowan missed a glorious chance to win the game just seconds after Mohill had hit the post with a shot from sub Seamus Kennedy in added time.

The first half was dominated by Mohill but their failure to make more use of the excellent John Mulligan meant that they failed to pull away from the champions.

Both teams will be pleased that they didn’t lose but both will also know that there is a lot more work to do in the coming weeks.

Mohill got off to a blistering start when John McGuinness and Padraig Tighe combined to set up John Mulligan for a first minute goal. A shocked Melvin Gaels responded with points from Peter McGowan and Stephen McGurrin to narrow the gap.

But Mohill continued to push on and two fine points from Alan McLoughlin and a Tighe free opened up a gap before what seemed like a game changing red card for Brendan Brennan who lashed out at Ronan Gallagher after he was awarded a free, earning a straight red while John McGuinness and Paul Brennan were yellow carded for clashing afterwards.

Mulligan & John McGuinness pointed with a Peter McGowan free in reply left Mohill with a 1-5 to 0-4 halftime lead and on their way to victory. But Melvin Gaels had other ideas and three points in the first quarter from McGowan (free) and Colm McGowan (2) put the game in the mix.

Again Mohill looked to have settled the contest when a long ball found Mulligan who produced a lovely low finish to find the net on 18 minutes.

Crucially, Melvin Gaels hit back within four minutes - Conor Sheridan scored a lovely point within seconds before Paul Brennan and Fabian McMorrow surged down the field, setting up Jessie McGuinness. His shot was cleared off the line by a defender but Colm McGowan dived in to force the ball over the line.

Both sides had chances to win it with Mohill kicking four wides and hitting the upright while Peter McGowan missed a great chance in added time to take the victory for the Gaels.