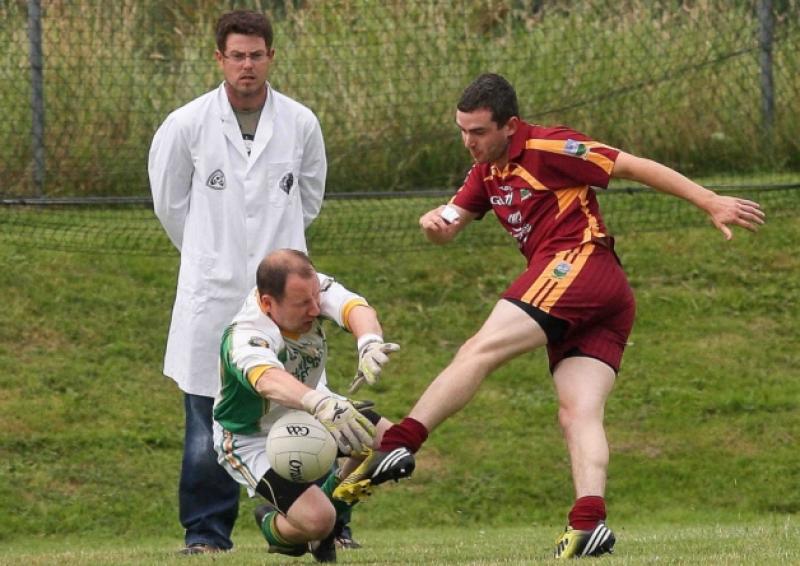 Damon Maguire was the hero for Drumreilly as his late point condemned Annaduff to defeat in a closely fought Group 3 encounter.

Damon Maguire was the hero for Drumreilly as his late point condemned Annaduff to defeat in a closely fought Group 3 encounter.

It was a game that either side could have claimed victory in but Drumreilly’s greater tenacity over the 60 minutes probably carried the day for them and gets their championship campaign back on track.

Annaduff now face a must win game against Allen Gaels but the odds would appear to be stacked against them, with the Drumshanabo men putting in a strong show against Glencar/Manor last Saturday.

Drumreilly started the brighter against Annaduff and it took a smart save by Thomas Flanagan to deny a goal chance as early as 20 seconds from Brian Fee.

Nigel Maguire opened the scoring with two points but Annaduff lamost goaled on 14 minutes when Sean McNabola was put through but Drumreilly keeper McGirl advanced smartly to smother McNabola’s shot.

Cathal Cox opened Annaduff’s account with a 22nd minute point while Ray Cox put over a free two minutes later to level the scores. But two more Nigel Maguire frees before the break, with a point from Conor Reynolds in reply, saw Drumreilly lead 0-4 to 0-3 at the break.

Annaduff levlled within two minutes after Cathal Cox fired over before Ray Cox tapped over a free that put his side in front for the first time in the game.

Annaduff surged again to go three points ahead after Ray Cox slotted over a free and from play. Once more Drumreilly came back to make it a one point game by the 49th minute with Damon Maguire and Declan Maxwell putting over a point apiece.

But Kenny Cox kept Annaduff in the driving seat when fired over from play four minutes later. Drumreilly rallied and got on level terms by the 60th minute after Nigel Maguire hit the target with a free and James Holohan, who was causing some problems for the Annaduff rearguard, shot over from play.

Almost four minutes of injury time was played at the end of this knife-edged contest. James Holohan put a Drumreilly scoring chance wide while at the other end Ray Cox hit an effort short in to ‘keeper Michael McGirl’s hands before Damon Maguire converted a free to sneak a win for Drumreilly.