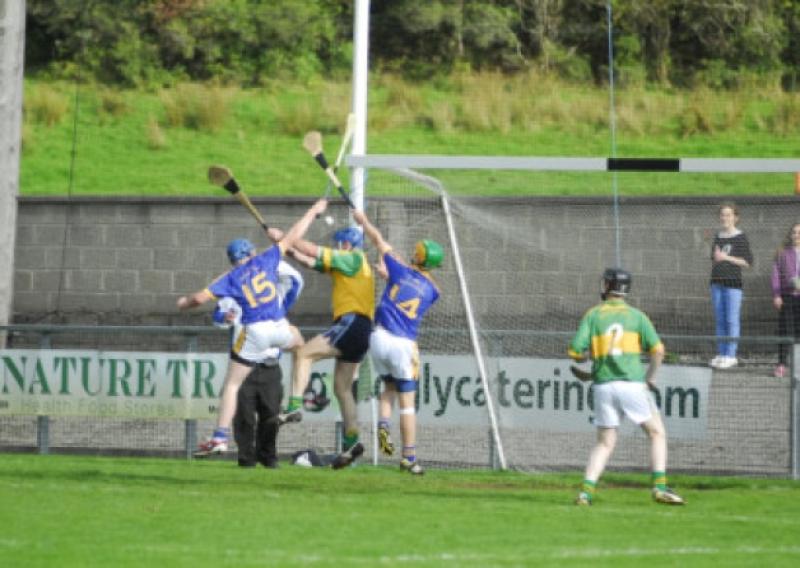 Three goals from Kevin Clerkin proved the difference as a lack-lustre Cluainin struggled to see off a limited yet very determined Gortletteragh.

Three goals from Kevin Clerkin proved the difference as a lack-lustre Cluainin struggled to see off a limited yet very determined Gortletteragh.

On paper, the Manorhamilton men should have won this game at their ease particularly as Gortletteragh were struggling to field a full team until close to the first whistle.

Indeed, even as their team was already on the field and about to start the game, Tomas Beirne arrived with seconds to spare, necessitatingmore changes but ironically, it was Gortletteragh who looked the more cohesive unit throughout the game.

Perhaps the Manorhamilton men suffred from the same problem that afflicted Carrick in the second game - red hot favourites against a team that was struggling to field, they looked as if they should walk over all Gortletteragh.

Truth be told, Gortletteragh probably had five or six players who would make the Manorhamilton line-up but the Gortletteragh men performed heroically, worked themselves to a standstill and were still pushing hard at the final whistle as Manorhamilton were desperately defending to stop a third Gortletteragh goal.

Gortletteragh had lot of motivation and that might have been missing for the north Leitrim side.

What Gortletteragh didn’t have was a poacher with the class of Kevin Clerkin and his three goals showed the sort of touch and ingenuity that Gortletteragh just didn’t possess as he was extremely clinical with limited chances.

Neither did they have the experience of the rock hard Steve Feeney in defence and the power of the Poniard brother to boost them along with the excellent game reading of Paddy Clerkin and Paddy Loughlin in the full-back line while keeper Val Cronin was calm and solid no matter what came his way.

But for all their resilience in winning through when not playing well, they, no more than Carrick-on-Shannon, will be greatly concerned by their lack of form. Like Carrick, they are playing far more regular games than their opponents and when it comes to hurling, stick-work and touch is all important.

Manor’s touch was not what it should be but no doubt, the red jerseys of Carrick will inspire them to perform at much higher level as they seek to defend their title.