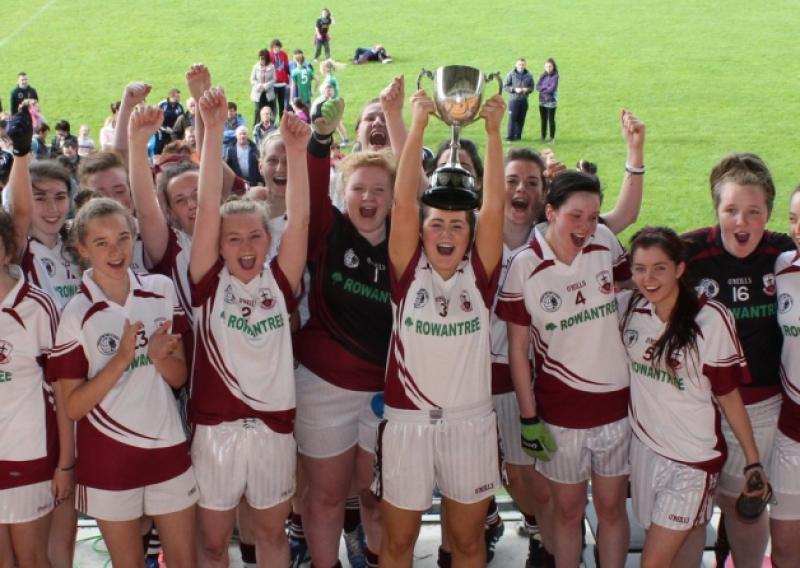 An absorbing game in which the result was unclear until the closing stages was ultimately won by a determined Drumkeerin team.

An absorbing game in which the result was unclear until the closing stages was ultimately won by a determined Drumkeerin team.

Drumkeerin had to overcome the blow of losing two of their star performers - Deirdre Devitt and Shannon O’Grady to injury but they showed great character and no little skill to emerge triumphant.

The role of midfielder Ann Marie Gallagher was crucial to her side’s success as she registered an impressive personal tally of 3-2.

At the other end of the pitch Michaelaigh Nolan had a big say on proceedings for Drumkeerin and she was particularly influential after her side suffered those injuries.

Playing with the benefit of a very strong wind in the opening half Drumkeerin took the game to St Josephs and after Shauna Clancy opened the scoring, Ann Marie Gallagher struck for the game’s opening goal in the fifth minute.

St Josephs knew the first half would be all about staying in contention while they played against the wind and Louise Mollahan was very much to the fore in keeping her side in contention.

Her score was quickly followed by an Emer Masterson point but the momentum was soon back with Drumkeerin as Bridget Gallagher struck for her side’s second goal.

After Aimee O’Grady’s point further extended the Drumkeerin lead it got even better for them as Ann Marie Gallagher struck for her second and Drumkeerin’s third goal.

That goal was followed by a Grainne O’Malley point but Drumkeerin completed the first half scoring with two points from Bridget Gallagher to lead 3-6 to 1-3 at the break.

There were no sign of nerves from the St Josephs players as they began the task of overhauling the deficit and eight minutes after the restart they pounced for their second goal with Mollahan finding the net for the second time.

With the wind at their backs St Josephs further reduced the deficit with Elaine McGovern, Louise Mollahan, Mary McBrien (two) and Grainne O’Malley all pointing to reduce the deficit to just a point with 10 minutes remaining.

Despite Cathriona Brennan receiving a yellow card, St Josephs continued to threaten but four wides meant they were unable to get back on level terms.

With the game deep in injury time Ann Marie Gallagher took matters into her own hands as she scored a goal and two points in quick succession to ensure Drumkeerin would be victorious.

St Josephs replied with a Louise Mollahan point but it was to be Drumkeerin’s day and the scoring was completed by Lauraine Walpole.