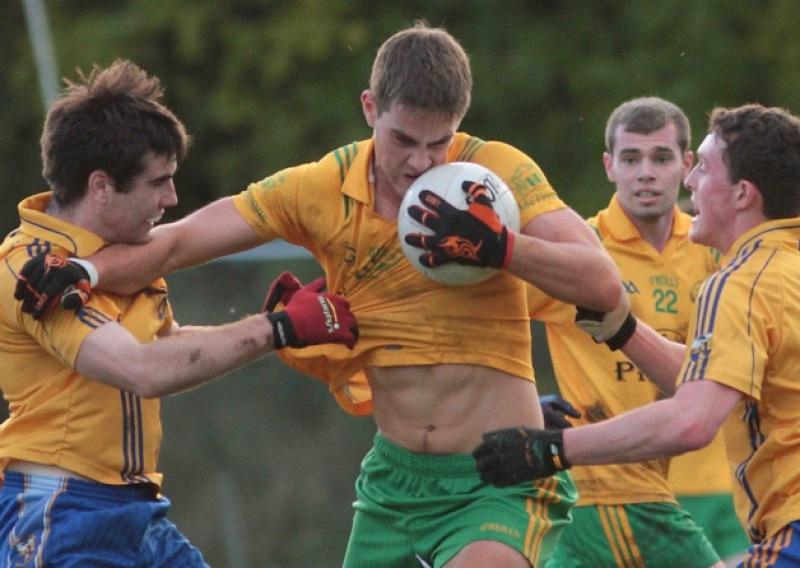 Goals in each half by Mark McRory set up 14 man Ballinamore for victory over defending champions Glencar/Manor last Saturday in Drumkeerin.

Goals in each half by Mark McRory set up 14 man Ballinamore for victory over defending champions Glencar/Manor last Saturday in Drumkeerin.

McRory was dismissed for a 47th minute second yellow card offence. The north Leitrim side always trailed Ballinamore in this lively and entertaining clash as they surrended their crown they won last year.

Despite closing the gap with Ballinamore to a point shortly before the interval Glencar/Manorhamilton were never able to turn the tables on their south Leitrim rival even after they went a man down for the last 13 minutes of the action.

Shane Moran dominated the exchanges at midfield while his score tally for Ballinamore proved vital over the hour in this clash. The concession of the game’s two goals by Glencar/Manorhamilton meant that the North Leitrim side played second fiddle for most of the exchanges.

Ballinamore made a bright start with Shane Moran shooting a point from play in the opening minute while Mark McRory drove to the Glencar/Manor net two minutes later with Moran adding a 4th minute point.

Glencar/Manor opened their account three minutes later when Niall Brady fired over from play. Conor Dolan then closed the gap with Ballinamore when he hit the target with another Glencar/Manor point from play.

But Shane Moran stretched Ballinamore’s lead to four points when he split the Glencar/Manor posts in the 11th minute.

Over the next nine minutes Glencar/Manor rallied and reduced Ballinamore’s advantage to the minimum with three unanswered points.

In this period Ronan Flynn whipped over two Glencar/Manor points from play while Niall Brady chipped in with a point before that.

A point still only separated the sides by the 26th minute after Shane Moran for Ballinamore and Conor Dolan from a Glencar/Manor free traded points at opposite ends.

Before halftime Luke Murphy tapped over a free that put Ballinamore ahead by 1-5 to 0-6 at the interval. After seven minutes of action in the second half two points still separated the sides.

In this spell Shane Moran slotted over a Ballinamore free while Mark McGourty did likewise for Glencar/Manor. Ballinamore then struck for the second goal of the day in the 38th minute when Mark McGourty toe poked the ball to the Glencar/Manor net after ‘keeper Stephen McPartland deflected a dropping ball into McRory’s path that was sent in from outfield.

This score proved to be a turning point in the game for Ballinamore. Conor Dolan replied with a Glencar/Manor point from a free seven minutes later but Luke Murphy restored Ballinamore’s five point lead soon after in the 44th minute when he slotted over a free.

Four minutes later Murphy put more daylight between the sides when he shot over from play for what proved to be Ballinamore’s last score in the game.

Following that Glencar/Manor battled hard to pull the game out of the fire when they threw everything at Ballinamore.

Ballinamore resisted steadfastly in this period and only conceded three points to Glencar/Manor in the final thirteen minutes of action.

Two of the Glencar/Manor points were scored by Conor Dolan from a free and play while James Rooney hit the final score for the North Leitrim side near the end.

The Ballinamore men now meet St. Manchan’s in the semi-finals but the possible absence of McRory could be a crippling blow despite last Saturday’s victory.