Leitrim back on track 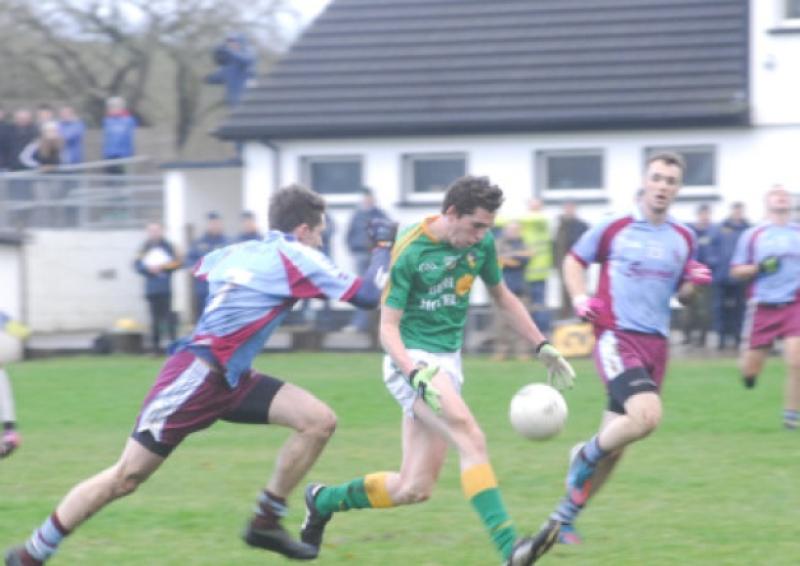 A winning start to the new year and an opportunity to improve fitness levels indicates a satisfactory start to 2014 and the Sean Hagan era.

A winning start to the new year and an opportunity to improve fitness levels indicates a satisfactory start to 2014 and the Sean Hagan era.

While the win was most welcome for all present in Cloone last Sunday as Leitrim began the defence of their FBD League title, there was certainly room for improvement.

The opening 30 minutes were much more fluid as the unique midfield pairing of brothers Aaron and Gerry Hickey were hugely influential while Barry Prior and Cathal McCrann (operating at centre-forward) gave an indication of their abilities.

As has often been the case for Leitrim in recent years it was captain Emlyn Mulligan who caught the eye with some wonderful points both from play and from placed balls.

Mulligan opened the scoring with a second minute free and a minute later doubled the lead with an excellent shot on the turn.

The lead was further extended when Ray Cox registered his first score of the year after good approach play involving Cathal McCrann and Robbie Lowe.

The manner in which players all over the pitch comfortably changed positions gave an indication of the type of fast and fluid game that Sean Hagan is trying to instil.

Robbie Lowe was as likely to be found operating around the middle as in the full-forward position while Kevin Conlan was as important in defence as in attack. The game was almost 12 minutes old before GMIT registered their first score when Jonathan Duane converted a 45.

Leitrim’s reply was instant with Emlyn Mulligan turning provider to find Cathal McCrann and the man who had been so impressive in goal in recent years showed how effective he can be further out the pitch with a wonderful point.

The danger of a black card was something which players had to be conscious of for the first time last Sunday and as Michael Lundy burst through the Leitrim defence before pointing it looked as though a few of the Leitrim players were conscious of the consequences a foul may have meant.

The deficit was then reduced to two points when Jonathan Duane pointed after he pounced on a loose ball but Leitrim hit back quickly with Gerry Hickey pointing from distance.

Leitrim dominated the closing stages of the half and were able to give the scoreboard a more accurate look.

The half-back line was the most dominant sector of the pitch for Leitrim as GMIT attacks often broke down at this point while Wayne McKeon, Gary Reynolds and Paul Brennan all showed a real desire to get forward whenever an opportunity arose and that was typified with Brennan scoring Leitrim’s goal.

That goal arrived in the final minute of the half after Robbie Lowe did well to win possession in a dangerous position. Emlyn Mulligan and Cathal McCrann were both involved in the final build-up and when the ball was played to Paul Brennan, he showed great composure to dispatch his shot.

The first half scoring was completed by Michael Lundy meaning Leitrim led 1-8 to 0-5. Having led by six at the interval, Leitrim were not as dominant after the break.

Points from Robbie Lowe and an Emlyn Mulligan free extended the Leitrim advantage before Eric Monahan replied with a free which was quickly cancelled out by another Emlyn Mulligan point.

The introduction of Stephen Tighe for the students bolstered their midfield considerably and as the game progressed, the GMIT threat grew significantly.

The heavy pitch, which had seen a lot of rainfall prior to the match but thankfully not during it, made life difficult for players who are not yet at their optimum level of fitness and the final stages certainly seemed to take their toll on some of the Leitrim players.

Some clever interplay involving Shane Hennelly, Jonathan Duane and Eric Monahan resulted in Monahan having a clear sight of the Leitrim goal. However, his powerfully driven shot was well blocked and diverted over the bar for a GMIT point.

Leitrim replied with an Emlyn Mulligan point but with 10 minutes remaining GMIT were looking much stronger.

Tomas Beirne was on the pitch at this stage of the game but the powerful midfielder was not as influential as he can be and he struggled to adapt to the pace of the game.

With seven minutes remaining GMIT were rewarded for their perseverance when Alan Meenaghan danced his way through the defence and then calmly dispatched his shot to the Leitrim goal and that was followed by points from Michael Lundy and an Eric Monahan free to leave just three points between the sides.

In the final minute Fergal Clancy released Paul Brennan who pointed before the scoring was completed when Eric Monahan converted a free.