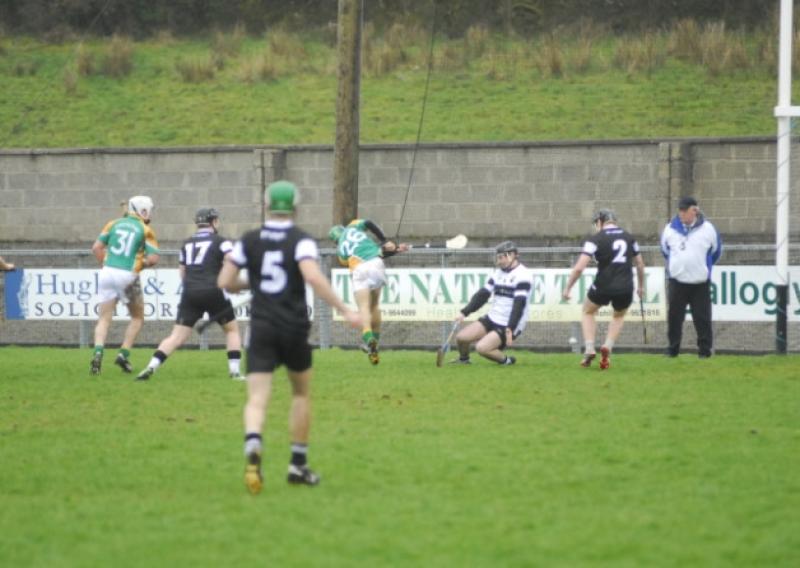 A thoroughly disjointed first half performance saw Leitrim out-classed and out-manoeuvred in almost every department by Sligo who looked as if they would tear Leitrim apart at their ease.

Thoughts of victory were very far away at the halftime break as the Yeatsmen led 2-7 to 0-3, Leitrim having got the last two scores of the half but the second half saw a transformation, gradual more than sudden, as the Green & Gold hurlers fought and clawed their way back into contention.

With a few switches and a lot more self-belief, Leitrim slowly cut the gap and still trailed by six points with seven minutes to go but a rocket of a Clement Cunniffe free that found the back of the net suddenly had the rather sparse attendance up on their feet cheering wildly.

And with less than two minutes to go, an amazing comeback was completed when sub Zemaco Moradi showed great timing to latch onto a high ball, flicking the ball past the Sligo keeper for the match winning goal.

The victory leaves Leitrim with a winner takes all encounter against Warwickshire next Saturday evening in Ballinamore, the winner going into the Division 3B Final against Tyrone.

Both teams started off with a point apiece, Gary Waldren for Sligo and Brendan Mulvey for Leitrim after a pass from Padraig O’Donnell, but Leitrim suffered a blow on five minutes when Eoin McDonagh flicked a ball past a slow advancing keeper Morgan Quinn after a high ball caught out two defenders.

It got worse for Leitrim as, five minutes later, Liam Reidy’s long range free, poorly struck, bounced in front of the Leitrim goal and somehow found its way to the Leitrim net in a real body blow.

Reidy and Waldren both added further points as Sligo continued to pull ahead with points from Eolan McCarthy, Gerard O’Kelly Lynch, Waldren and Reidy.

That left Leitrim 11 points adrift but then the home side seemed to fine some form, Padraig O’Donnell converted a free and David McGovern added a huge score from 65 yards, leaving Leitrim 2-7 to 0-3 behind at the break.

The second half opened with Sligo seemingly on top again with Waldren pointing but then O’Donnell converted a third minute free.

Scores were not coming quickly and 11 minutes passed before Niall McLoughlin collected a sideline ball and hooked over a lovely point on the turn. Sligo keeper Declan Loughnane then saved a 20 metre free from O’Donnell but he made amends with a huge point from the right sideline, some 50 yards out.

Eolan McCarthy landed what turned out to be Sligo’s last score with 16 minutes to go but O’Donnell converted a free and Kevin O’Connor stopped a Sligo shot on the line.

Cunniffe blasted a 20m free over the bar, the sliothar tipped over by the keeper but another O’Donnell free left six points between the teams with less than nine minutes to go.

A comeback still looked unlikely but when a Sligo defender over-carried, Cunniffe blasted the ball to the back of the net.

O’Donnell swept over another free but Leitrim got the second goal they needed when a huge clearance landed in behind the defence and Moradi swept home the sliothar from close range to push Leitrim into the lead.

A shell-shocked Sligo didn’t know what to do and Kevin McGrath scored a brilliant point from the corner to seal a famous win.