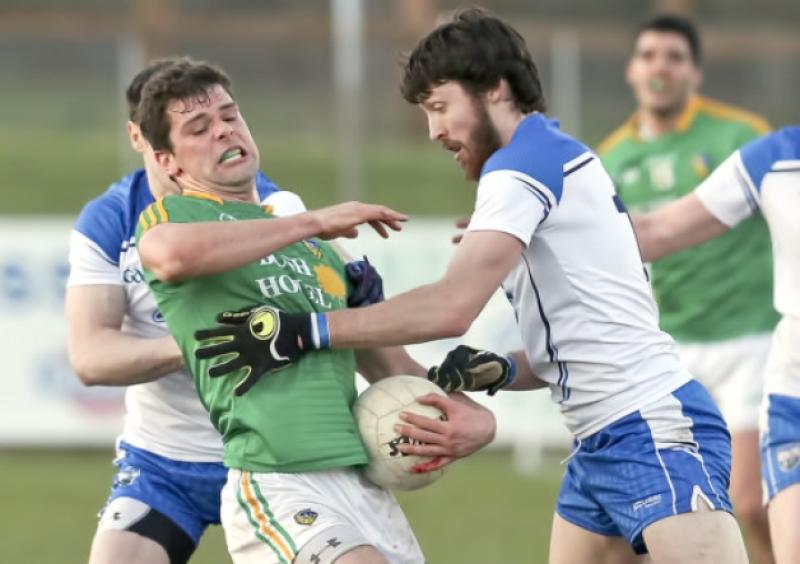 Shane Ahearne’s first half goal offered the confidence booster for Waterford to kick on towards their first win of the Division 4 campaign and knock back Leitrim’s promotion challenge on a sunny Saturday evening at Fraher Field.

Shane Ahearne’s first half goal offered the confidence booster for Waterford to kick on towards their first win of the Division 4 campaign and knock back Leitrim’s promotion challenge on a sunny Saturday evening at Fraher Field.

Leitrim led by 0-6 to 0-4 before Ahearne’s intervention and they never regained pole position thereafter.

In the glorious sunshine, Waterford opened with points through Conor Phelan and Paul Whyte (free). James Glancy blasted a glaring goal chance over the bar on 11 minutes after Wayne McKeon struck the post. Damian Moran and Emlyn Mulligan (free) snuck Leitrim ahead (0-3 to 0-2) on the quarter hour.

Whyte levelled with his second free. A pair of Mulligan frees pushed the promotion hopefuls back in front. Conor Phelan nailed a quality score, his second of the half. A Ray Cox free regained Leitrim’s two point lead (0-6 to 0-4). At this stage, Leitrim looked more controlled, particularly at midfield, with Waterford wasting six chances.

On 32 minutes, Paul Whyte’s lengthy delivery picked out Shane Ahearne loitering with intent at the edge of the goalmouth. He snuck behind the cover and slotted calmly into the bottom corner past Enda Lyons. Two points followed hot on the heels. Whyte started a move that consisted of several swift passes and finished with Wayne Hutchinson. Nearing half time, JJ Hutchison cracked one with the outside of his right foot and Waterford could stride towards the dressing room (1-6 to 0-6).

Leitrim narrowed the margin to one at the beginning of the second period through two Mulligan frees. Waterford scrubbed that out as Shane Briggs and Declan Allen pointed. Again Mulligan converted a free but Waterford were defending with determination.

Niall Carew’s side put together a decisive spurt of four points in a row. Three of them came closely together. Ó Lonáin quickly tapped a free to JJ Hutchinson, Allen secured his second and Ahearne swept over a close in free. Whyte added another free on 56 minutes and Waterford were on calm waters with six to spare.

Leitrim sent in six substitutes to desperately pursue victory. Their poor shot selection heighted the sense of panic and the wide count soon entered double digits. They only mustered one point from play in the second half, sub Shane Foley briefly halting the home side on 58 minutes.

With seven minutes remaining, the outstanding Shane Ahearne then gathered a JJ Hutchinson ball to work a better angle and swing over. Emlyn Mulligan scored his seventh free after 65 minutes.

Waterford clung tight to their clean sheet and Kieran Connery made a late block. A black card for Robert Lowe in injury time summed up a flaky evening.