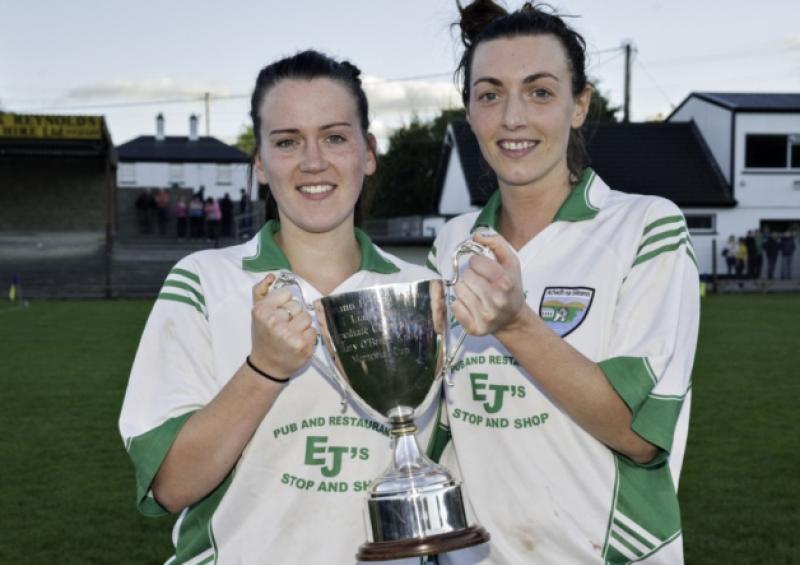 A new force may be emerging in Ladies football as an impressive Oughteragh Gaels dominated Saturday’s Intermediate Final from start to finish.

A new force may be emerging in Ladies football as an impressive Oughteragh Gaels dominated Saturday’s Intermediate Final from start to finish.

The physical power, pace and strength all over the field of the Aughnasheelin and Ballinamore side was just too much for a young and weakened St. Francis to cope with and the writing was on the wall for the Allen Gaels and Ballinaglera women.

Oughteragh Gaels look to have the same sort of talent in their ranks that has seen Dromahair and St. Joseph’s become major forces at Senior level and if they show the same sort of form next year that they have in 2014, the Aughnasheelin and Ballinamore combination have the potential to threaten the big guns.

The two teams had been the outstanding teams in the grade all year but as Oughteragh Gaels seem to have got stronger as the year went on while St. Francis badly felt the the loss of key players like the injured Ciara McPartland and the absent Ailish Cornyn.

Cornyn, who is abroad travelling, might have given St. Francis a foot-hold in the middle of the park where the O’Dowd sisters at midfield, Sarah McLoughlin, Katie Duignana, Roisin McHugh and Mary McNulty gave them a huge advantage.

It was definitely a disappointing and dispiriting day for St. Francis but they do have a very young team that will be a force in the years to come but it was a tough lesson to learn last Saturday.

Roisin McHugh deservedly took the Player of the Match award but the youngster wasn’t far wrong in suggesting that any one of her team-mates might have taken the plaudits as Oughteragh delivered a very comprehensive team performance.

Their defence, often over-looked with the scoring power the Oughteragh Gaels possess upfront, never allowed St. Francis to gain any sort of rhythm and their goal was threatened just once over the course of the hour with Ellen Wrynn, Katie Duignan and Laura Bohan particularly effective.

From midfield up, Oughteragh Gaels have a line-up to rival any team in the county as the pace of the O’Dowd sisters in the middle of the park, Laura was very effective with her long runs from deep, caused St. Francis huge problems.

Sarah McLoughlin didn’t have to be her dominating self, she did score 1-2 but she seemed to content to allow the impressive Roisin McHugh, Louise Gallagher, Mary McNulty, and Tara Fitzpatrick do all the damage.

Oughteragh are a team on the move, be warned.

The game opened slowly with both teams missing chances but St. Francis suffered a major blow when Ciara McPartland badly injured her shoulder in a fall, robbing her team of their major attacking threat as Dara Morahan came on.

Laura O’Dowd finished off a good move from the corner to open the score on eight minutes but Aine Flood hit a great point to level. Roisin McHugh and Eilish O’Dowd swept over fine points.

The Oughteragh defence made a good block on a Aine Flood shot but the County U16 player hit back with a point after a poor clearance to leave a point between the teams with 12 minutes gone. Mary McNulty put over a free from a tight angle before Louise Gallagher set up Sarah McLoughlin for a point.

With Ballinamore increasingly dominating and St. Francis turning over the ball, Oughteragh added four points in as many minutes from Laura O’Dowd (2), McLoughlin and Tara Fitzpatrick.

Already seven points up, Oughteragh put the game beyond reach on 23 minutes when a high shot dropped short and Sarah McLoughlin gathered and blasted the ball to the St. Francis net from close range.

It wasn’t one way traffic as Aoife Smith made a good save to deny Aine Flood a goal with Flood tapping over two frees before the break.

However, that gain was wiped out when Louise Gallagher dodged her way through the St. Francis rearguard and blasted the ball to the net to leave Oughteragh Gaels 2-9 to 0-4 in front at the halftime interval.

The second half continued exactly where the first half had left off with the ball in the St. Francis net, Player of the Match Roisin McHugh pouncing after a long ball was allowed drop in front of goal and the half-forward swept the ball to the net.

Tara Fitzpatrick, McHugh and Gallagher all added points in the first three minutes before Tanya McPartland scored a lovely point but Oughteragh hit back with points from Eilish O’Dowd and Mary McNulty.

McHugh and Laura O’Dowd swept over points before St. Francis got their last score of the game on 15 minutes when Maeve Daly hit a lovely point.

With Oughteragh Gaels starting to empty their bench, taking off Katie Duignan, Roisin McHugh, Louise Gallagher and Tara Fitzpatrick, it didn’t diminish their threat as Maeve Glesson pointed with 11 minutes to go.

Mary McNulty added a point but the game ended on a high for the new champions Chloe Harvey who clearly gathered the ball off the ground as she was lying on the ground, feeding the ball to Aoibheann Flynn who blasted home from close range.