Display delights manager and player of the match 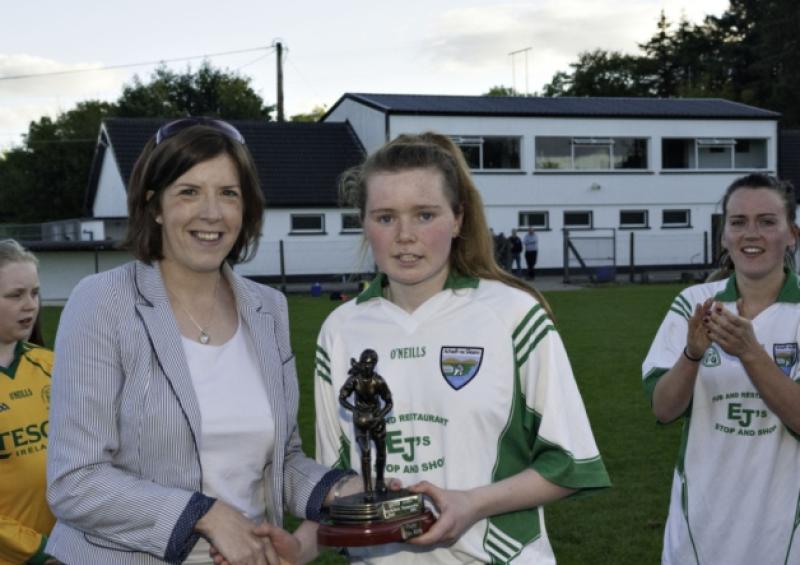 A delighted Oughteragh Gaels manager Barry McWeeney sees great things in the year ahead for his charges after their victory last Sunday.

A delighted Oughteragh Gaels manager Barry McWeeney sees great things in the year ahead for his charges after their victory last Sunday.

The joint manager, with Ronan O’Rourke, said “Absolutely delighted, a great performance from one to 15, everyone one and them and those we brought on were spectacular.

“Myself &Ronan O’Rourke were chatting earlier on in the year about how great it is to have the two clubs together because we were messing about 9-a-side, it is great to have your own team for your own club.

“But when you have competition like that, you can really start improving players and really get Ladies football back on the map. I think it is the first time Aughnasheelin or Ballinamore have had a team at this level and to win it this year is just brilliant.”

Player of the match Roisin McHugh down-played her own performance - “I wasn’t expecting that at all, I just like to do my best whenever I play and thank God we came out on the good side this year. It was a great team performance and the fitness kicked in at the end, all our hard training at 7.30 in the morning and it all showed in the end.”

The focus is already turning to the Connacht campaign for Roisin - “Back to the running, fitness training next week, we’ll be looking forward to that. Hopefully we’ll be able to compete well in Connacht and do Leitrim proud.”

St. Francis manager Eamon McGowan agreed his team couldn’t match the physical power of Oughteragh Gaels - “We have a young team and I’d say the physicality in the middle of the field, they were way more dominant than us.

“I’m not making excuses, they were way the better team but losing Ciara McPartland was a huge loss as she is one of our best finishers. Ailish Cornyn is a huge loss. When that physicality was needed, Ailish would have brought that to the table. But that is the way football goes, you have to put up with these things.

“I’m very proud of these girls, they are tremendous bunch, the majority of them are between 15 and 17 and hopefully, if they stick at it, in two years time, we might win a County title.”

And Eamon had words of encouragement for his team - “I know at the minute the girls are down, we’ve lost two finals this year and naturally enough, they are disappointed. But if they can see the bigger picture, we can try to progress a bit more next year.”