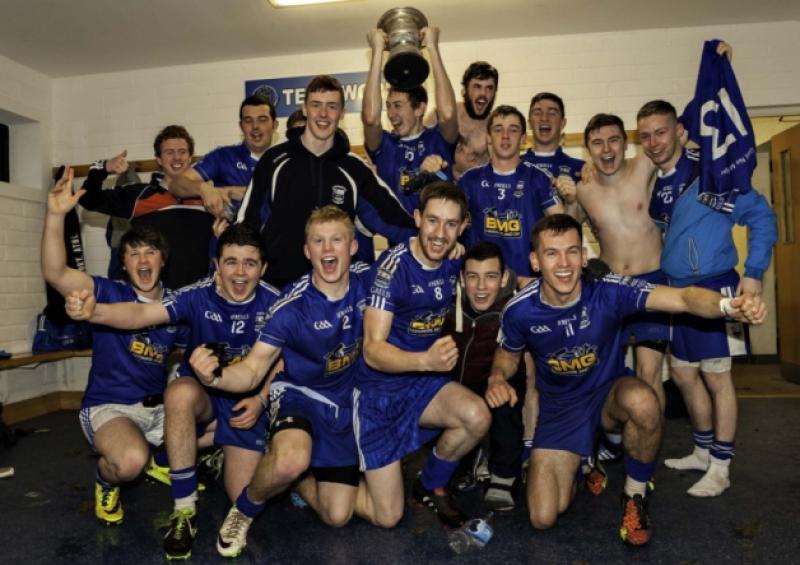 Last Saturday’s U-21 B Championship Final proved to be an absorbing encounter which Drumkeerin seemed to be on course to win comfortably in the first half only for Melvin Gaels to produce an inspired comeback.

Last Saturday’s U-21 B Championship Final proved to be an absorbing encounter which Drumkeerin seemed to be on course to win comfortably in the first half only for Melvin Gaels to produce an inspired comeback.

U-21 B Championship Final

The defensive approach adopted by Melvin Gaels for the opening quarter of the game played into the hands of Drumkeerin who bossed matters during those opening exchanges.

Patrick McHugh, James Gallagher, Jamie Langan and Cathal McCawley all proved to a be a source of real danger for Melvin Gaels but it was Felim McHugh who proved to be particularly difficult to curtail.

Colm McGurran had an early opportunity for Melvin Gaels to take the lead but he was denied by the upright and Drumkeerin then took control of the contest.

Cathal McCawley was first to raise a white flag and that was followed by further points from Felim McHugh and James Gallagher.

With Melvin Gaels retreating to such an extent Drumkeerin were invited to shoot from distance and while their long range shooting was impressive, they will perhaps feel they could have been even more clinical as they had three wides to match their three points inside the opening 10 minutes.

The lead was extended when Felim McHugh rose highest to claim a Melvin Gaels kickout and a combination of quick passing and strong support running led to Glen Kavanagh pointing to further increase the Drumkeerin lead.

Moments later Drumkeerin repeated the trick. On this occasion it was James Hazlette who rose highest to win a Melvin Gaels kickout and when the ball reached him Jamie Langan effortlessly slotted the ball between the uprights.

With barely a quarter of the game elapsed Drumkeerin opened up a six point lead with a fine point from Jerome Maguire and such was their dominance at that stage of the game, the lead arguably should have been even greater.

After Liam Ryan was fouled, Jonathon Connolly converted a free to register his side’s first score.

Drumkeerin replied with a Jamie Langan free but the remainder of the half was dominated by Melvin Gaels who added to their tally with three points from Paul Simpson, the final one coming from a free meaning Drumkeerin’s lead was now not as convincing as it had been earlier in the half.

Trailing 0-7 to 0-4 as the second half got underway, Melvin Gaels made an explosive start to the second half and created a fantastic goal scoring opportunity but Paul Simpson’s effort lacked enough power to sufficiently trouble Drumkeerin goalkeeper Thomas McPartland.

Having survived that let-off Drumkeerin then created three goal chances of their own in quick succession, but all three chances went abegging.

Those misses didn’t seem to effect the confidence of the Drumkeerin players who extended their lead to four points with an excellent point from Jamie Langan.

However, just as Drumkeerin bossed the opening quarter of the game, it was Melvin Gaels who finished the game impressively to claim victory.

A defensive mix-up in the Drumkeerin rearguard afforded Melvin Gaels the opportunity for the game’s opening goal with Michael Ferguson on hand to apply an emphatic finish.

With 11 minutes remaining Melvin Gaels levelled matters with a Paul Simpson free after a foul on Liam Ryan who had a significant say on proceedings during the second half.

Melvin Gaels took the lead for the first time when Jonathon Connolly converted a free and a minute later they pounced for their second goal.

A quick free played to David McGowan left the Drumkeerin defence exposed and after he exchanged passes with Colm McGurran, McGowan applied a confident finish past Thomas McPartland.

With Drumkeerin forced to commit numbers forward, Melvin Gaels showed their threat as a counter-attacking team and extended their lead with a Jonathon Connolly point.

Victory was all but secured two minutes from the end when Kevin Sweeney pounced for Melvin Gaels’ third goal to spark scenes of celebration.

To their credit there was never any sign of the Drumkeerin players throwing in the towel and in the final minute they struck for a goal. James Gallagher’s delivery was collected by Felim McHugh who blasted a shot past Neil Gallagher but at that late stage it was evident it was going to be Melvin Gaels’ day and that was confirmed when Colm McGurran’s point completed the afternoon’s scoring in injury time.