Aughnasheelin lose and win as Dromahair find their form 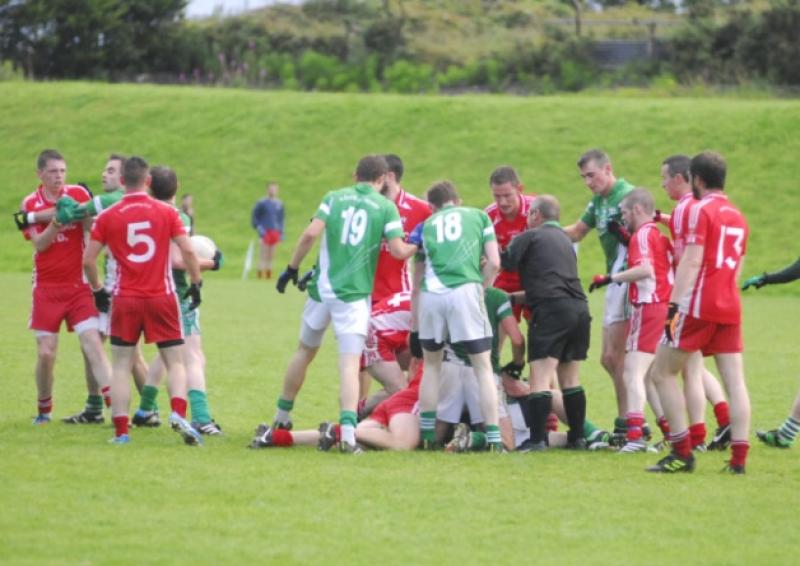 Both Aughnasheelin and Dromahair qualified from Group 3 of this year’s GWP Intermediate Championship despite a 0-12 to 0-6 win for the north Leitrim side, when both teams met at Shane McGettigan Memorial Park in Drumshanbo on Saturday evening.

Both Aughnasheelin and Dromahair qualified from Group 3 of this year’s GWP Intermediate Championship despite a 0-12 to 0-6 win for the north Leitrim side, when both teams met at Shane McGettigan Memorial Park in Drumshanbo on Saturday evening.

In what was an even opening period on a slippery Drumshanbo surface, it was Aughnasheelin’s Niall Mulvanerty who opened proceedings with a well hit point from play with two minutes played.

Dromahair’s Conor Farrell replied almost instantly before Conor Cullen sent the Green & White back into the lead with six minute elapsed with a point from his left boot.

Parity was restored on seven minutes by Stephen Smith, two minutes before Dromahair captured the lead for the first time as Clinton registered the first of his three points on the night. Dromahair now leading by three points to two.

Dromahair took control and notched four points without reply. Conlan was upended by a clumsy challenge from Wayne Gilgunn but there was nothing awkward about Conlan’s free which drifted between the posts. Conor Kelly and Declan Fowley slotted over before a Clinton free was again dispatched with ease, as Dromahair looked in control with a 0-7 to 0-2 advantage.

Cullen afforded Aughnasheelin some respite as he adjudged the position of the posts correctly for his second point.

But Dromahair reopened a five point lead three minutes before half-time as an Aughnasheelin defender was penalised by referee Gerry Gallogly for over carrying. Gerry Kelly was assigned with the simplest of tasks as he slotted over in front of the posts for his only score of the game.

The south Leitrim side almost found a way back into the game on 28 minutes - a sharp turn of pace saw Sean McWeeney break away from his marker. He supplied Gavin Sammon who neatly slipped the ball through to the on-running Fergal Earley who was thwarted by a fantastic block on the line from Dromahair goalkeeper Kieran Meehan.

Aughnasheelin were forced into a substitute a minute from the break. Niall Mulvanerty pulled back Clinton just as he prepared to shoot. Referee Gallogly adjudged the foul to be cynical and issued Mulvanerty the black card as a result.

Clinton failed to find the necessary trajectory to kick over what should have been a relatively easy score.

However, Kevin Conlan made no such mistake a minute into injury time as he ducked and dived through two challenges before punching the ball over the bar.

Conor Kelly secured his second point moments before the half-time whistle as Dromahair led by seven points at the interval - 0-10 to 0-3.

The sides exchanged points early on during a second period which only produced five points. Conor Kelly competed his hat-trick of scores on 32 as his effort which looked bound for the top corner of Derek Moran’s net, was expertly tipped over the crossbar by the net minder.

Gavin Sammon kicked over Aughnasheelin’s fourth of the tie to bring the deficit back to seven.

Both teams didn’t exactly put on a kicking exhibition over the course of the game as the scoreline suggests.This continued as Conor Kelly hit two poor wides in quick succession while Fintan Fitzpatrick and Conor Cullen hit wides for the green and white.

Dromahair were extremely fortunate not to be reduced to 14 men on 48.

Following a heated exchange between a number of players on each side, Jamie Conlon struck an opposition player right in front of both the linesman and the referee. Conlon was a lucky boy as he only received a yellow card.

As the rain began to fall once more, the game became more and more mistake ridden and bogged down. Fitzpatrick got himself on the score sheet as he reduced Dromahair’s lead to six with seven minutes to play.

The same man spurned a golden opportunity to half the deficit moments later. Having been set up by a long ball from Damien Gilheaney, Fitzpatrick could only strike the ball straight at Meehan in the Dromahair goal, much to his manager’s frustration.

Facing defeat, Aughnasheelin were reduced to 14 on 56 when the clearly irked Earley was dismissed for some unsporting conduct.

The sides exchanged one point each before the full-time whistle. Clinton completed his hat-trick from his left foot on 58, while Paddy McManus sent over the last free of the game from a 45 one minute into injury time.