Morgan Quinn inspires Aughawillan to victory in “Game of Death” 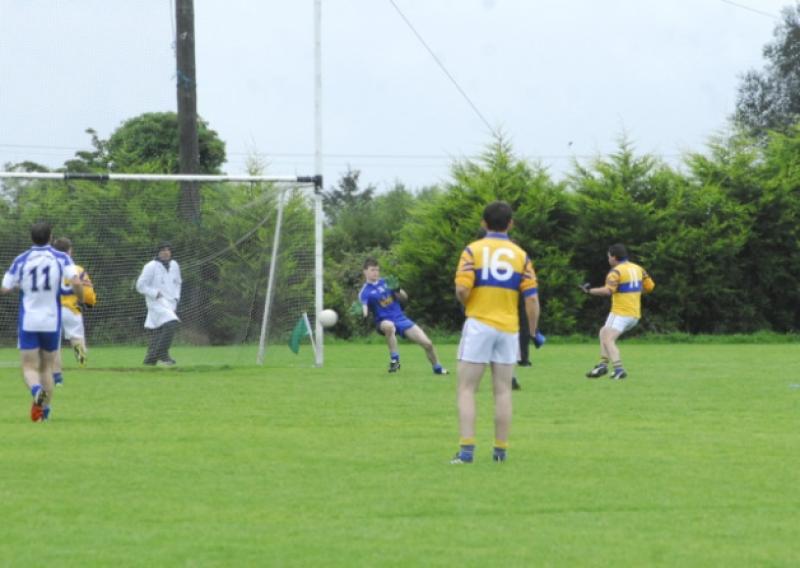 Aughawillan will take on Carrigallen to decide who takes the last quarter final place in this year’s Connacht Gold Senior Championship, following a Morgan Quinn inspired win over 2012 champions Melvin Gaels at a rain soaked Drumshanbo on Saturday evening.

Aughawillan will take on Carrigallen to decide who takes the last quarter final place in this year’s Connacht Gold Senior Championship, following a Morgan Quinn inspired win over 2012 champions Melvin Gaels at a rain soaked Drumshanbo on Saturday evening.

Quinn registered a goal and three points for the underdogs in Shane McGettigan Park while the impressive corner forward Niall Doonan was on hand with two points of his own, as the south Leitrim side enjoyed a four point win over the Kinlough men.

It was the eventual victors in this tie who romped into an early lead courtesy of full forward Gary Plunkett who opened the scoring with a point from play within the first minute.

This was followed four minutes later by the game’s opening goal as the lively Pierce Dolan combined with Ciaran Gilheany, before teeing up Morgan Quinn who from inside the square, side-footed the ball past the oncoming Michael Neil Gallagher to extend the Willies’ lead to four points.

It took eight minutes for the north Leitrim side to claim their first score. The inclement weather conditions took its toll early on as players struggled to cope with both a greasy ball and surface.

Referee Seamus Mulhern adjudged an unfortunate Aughawillan player to have picked the ball off the ground illegally 30 yards from his own goal after he lost his footing. Tom Lipsett did the honours and chipped over the first of his three points.

Despite this, Gaels battled hard and pegged back the deficit to just one point mid-way through the opening half courtesy of a Conor Sheridan goal. A rapid one-two between Michael Ferguson and Colm McGurran saw the former break through to meet Aughawillan goalkeeper Fionnbar Quinn.

The net minder then upended Ferguson in a one-on-one situation giving the referee little choice but to award a penalty. Former County player Sheridan calmly slotted the ball to Quinn’s right to leave just a point between the sides.

Indeed Sheridan could have levelled the tie on 17 minutes, but dragged his shot wide of the target. The first of four Melvin Gaels wides.

Both teams exchanged points soon after as one score remained between them. Aughawillan then profited from an excellent score from Dolan on 23, who zig-zagged his way through the challenge of two defenders before neatly placing the ball between the posts from the most difficult of angles at the end line.

Melvin Gaels’ David McSharry was on hand to set up McGurran for his second point of the game four minutes from the break.

Doonan duplicated McGurran’s feat on the stroke of half time as he too sent over his second point to restore Aughawillan’s two point lead - the south Leitrim side leading 1-5 to 1-3 at the interval.

Melvin Gaels struggled to deal with a commanding Aughawillan attack during the first half of the second period as the weather conditions worsened.

Ciaran Gilheany sent over his only point of the game from a close range free, to give the blue and yellow a three point lead following a foul on Dolan. The corner forward continuing to trouble the Aughawillan defence with his dangerous pace and clever feet.

Dolan himself claimed his second point of the day on 36 minutes from another free which was brought forward following dissent from Melvin Gaels’ Colm McGowan.

It was all Aughawillan at this stage and some off range shooting was all that prevented Aughawillan from going further ahead, as they registered three wides in the space of as many minutes.

Having failed to take advantage of possessing the lions’ share of play, Aughawillan’s lead was then pegged back to three on 44 as Lipsett’s quick free found the hands of Sheridan who quickly returned the ball back to his team mate before Lipsett notched his second score.

The rain and wind continued to batter the Drumshanbo venue as conditions became more and more inclement. This forced both teams to adapt a shorter passing game as any attempted long range exchanges were hampered by the gusting winds.

The small crowd in attendance had to wait until the 53rd minute for the next score as Quinn sent over his third point for Aughawillan to leave the score at 1-8 to 1-4 in their favour. Noel Plunkett was then gifted his only score of the game with five remaining as he cruised unchallenged through the spine of the Melvin Gaels team before kicking between the posts.

The final score of the game came three minutes before the full-time whistle as Lipsett scored his third from a free.

Melvin Gaels’ evening ended in ignomy as Colm McGowan was issued a red card for dissent in the second minute of injury time.

Aughawillan now face an eighth place play-off with Carrigallen this Saturday to decide who will take the final quarter-final place, while Melvin Gaels must face into a relegation semi-final.