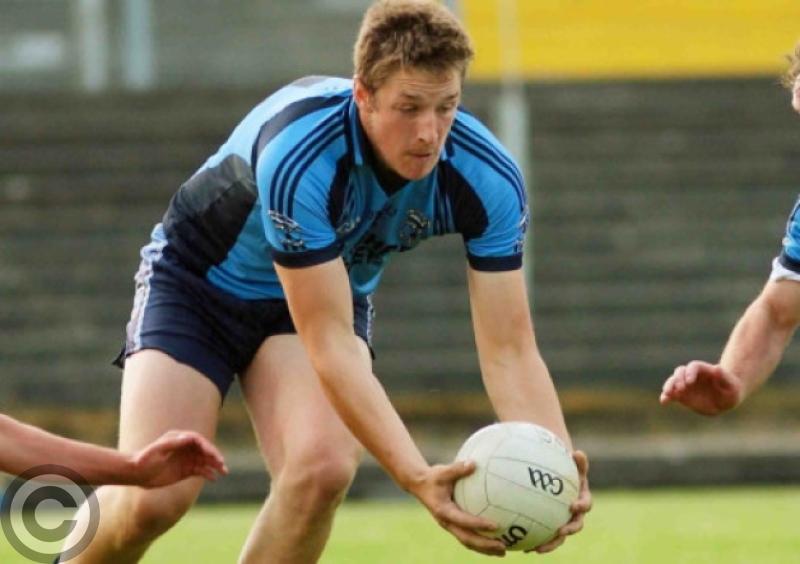 On what was a very wet evening in Cloone a pointed free from superb free taker Conor Beirne in the last minute of injury time sent Eslin through to the quarter finals of this year’s Intermediate Championship.

Drumkeerin could be deemed somewhat unlucky not to have won this game but with a total of 17 wides they put pressure on themselves.

However it was also the second half performance of Tomas Beirne that was the difference between the teams in the end. Beirne’s ability to field and distribute the ball in difficult and wet conditions gave the Eslin forwards a huge advantage.

Drumkeerin’s short passing strategy never managed to break down the Eslin defence and more often than not they were forced to shoot for points from impossible angles.

The game was played on an evening when there was no let up to the rain, and its credit to the players from both sides and indeed to referee Ray McBrien that the game was sporting and entertaining throughout.

Drumkeerin were first off the mark with an excellent free from 40 metres by Edward McTiernan which was quickly followed by a Tomas Beirne point and then a pointed free from Conor Beirne to put Eslin ahead.

With Colm Clarke and Declan Daly gaining the upper hand in the middle of the field, Drumkeerin were moving forward. Four wides in quick succession from Drumkeerin were followed by three excellent points, one from Cathal McCawley, the second was a free pointed by Edward McTiernan after a foul on McCawley and the third from Colm Clarke.

This put Drumkeerin two points ahead with 15 minutes of the first half played. Eslin were finding it difficult to penetrate the Drumkeerin defence but on a rare breakaway, Tomás Beirne was fouled allowing brother Conor to tap over the resultant free.

A mixup in the Eslin defence, allowed Edward McTiernan to break through for a good point from play. Then Drumkeerin looked to have broken through for a goal but Cathal McCawley’s fisted effort flew into the side netting which, a real let off for Eslin.

Following the short kick out from Enda Turbitt, Eslin worked the ball up field for Conor Beirne to score from play. Drumkeerin put three more balls wides before Jamie Langan finally managed to score from a free with five minutes left in the first half.

Conor Woods pulled off a wonderful save from a Tomás Beirne shot. This gave Drumkeerin the chance to break up field and close the first half scoring with a fine James Gallagher point which left the half time score Drumkeerin 0-7 Eslin 0-5

Eslin started the second half with full forward Tomás Beirne now operating at midfield and the impact of this move was immediate. Tomás fielded the restart and whilst moving forward was fouled. Conor Beirne converted the resultant free.

Drumkeerin retaliated with a fine individual point from Keith Gallagher to put his team three points ahead once again. Eslin now were the dominant team with three unanswered points from Conor Beirne and Joesph Stenson to put the sides level.

Again Drumkeerin had Conor Woods to thank as he threw himself full length to keep out a goal shot from Jamie Stenson. From the resultant 45 , Barry McLoughlin broke forward and fired Eslin in front with ten minutes left to play. Jason Beirne then soloed through for Drumkeerin to level the scores.

Drumkeerin’s McTiernan put his team back in front when he pointed from a difficult angle with only 6 minutes left to play. Conor Beirne levelled the scores and again Joseph Stenson kicked a long range effort to restore Eslin’s lead as the clock ticked down.

Edward McTiernan seemed to have secured the draw for Drumkeerin when he pointed with a minute of injury time left to play. However Eslin secured possession and were awarded a free about 50 metres from goal.

Conor Beirne put the ball between the uprights with ease to secure a famous victory for Eslin, putting them through to the Intermediate quarter finals andon top of this group.

Drumkeerin will rue the high number of wides throughout the game but Eslin’s defence which was well marshalled by captain Eamonn Stenson can take great credit for keeping the pressure on Drumkeerin’s attackers.

Drumkeerin who are also through to the quarter finals will know that they have to improve in the scoring department if they are to advance further in the intermediate championship.