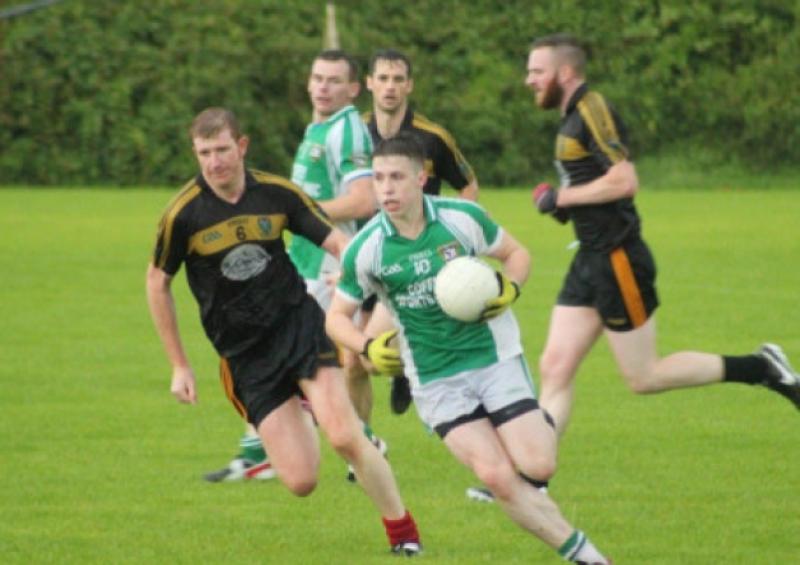 Mohill sent a loud warning to their competitors for the 2014 Connacht Gold Senior Championship when they comfortably dispatched of neighours Bornacoola in a one sided conclusion to their final group game in Ballinamore on Saturday evening.

Mohill sent a loud warning to their competitors for the 2014 Connacht Gold Senior Championship when they comfortably dispatched of neighours Bornacoola in a one sided conclusion to their final group game in Ballinamore on Saturday evening.

Despite having already qualified for the quarter finals before the ball was thrown in, Mohill showed no mercy to a Bornacoola team short of the services of county midfielder Damian Moran and who struggled throughout the evening to match the quality on offer from last year’s beaten finalists.

For their part, Bornacoola simply could not match the intensity and cleverness of their opponents. Although they refused to throw in the towel at any stage, they were simply outclassed by a Mohill team who could afford to spring the likes of County U21s Eanna Madden and Shane Quinn from the bench.

While Jason Conroy, Gary McCloskey, Trevor Howard and Sean McKeon battled impressively to keep the game alive, it was clear from the early exchanges that Mohill were the superior team and would ultimately secure the victory.

They now progress to the quarter finals and will hope to build on the progress they made last year. On the evidence of Saturday’s showing, they have improved considerably in the last 12 months and this young group of players will feel that they are serious contenders for the 2014 crown.

The accuracy of their forward line will have been particularly pleasing to their management team as they clocked up an impressive 1-22 in wet and windy conditions on Saturday evening.

Mohill will know that sterner tests lie ahead, but nonetheless, scores of this magnitude are seldom registered in the nip and tuck of Leitrim Championship football and this performance will not go unnoticed by the other main contenders for the 2014 crown

Bornacoola, on the other hand, must face into the relegation play-offs with an ageing team who may find it difficult to get motivated for the challenges ahead.

Last year they were rescued from a Relegation dog-fight when Glencar/Manorhamilton triumphed in the Intermediate Championship, and having qualified for the quarter finals in each of the previous 10 years, they will be unfamiliar with the particular mental qualities required to survive at the other end of the Championship spectrum.

Ironically, they made the better start on Saturday evening, while playing against the wind.

From the throw in, Michael Duignan played Brian Conroy in behind the Mohill defence to create an immediate goal scoring opportunity that might have set the tone for the game ahead.

However Conroy’s hesitation in the difficult conditions allowed the Mohill defence to regroup and the chance was passed up.

Although Gary McCloskey would open the scoring for the men in Black and Amber two minutes later, it was Mohill who would go on to completely dominate the opening period and who scored 12 unanswered points in the next 25 minutes to essentially put the outcome beyond any doubt.

It was Padraig Tighe who opened the Mohill men’s account following McCloskey’s opening score and from then to the half time whistle they played some of the best football of the championship so far with some terrific scores from Alan McLoughlin and Ronan Kennedy in particular setting the tone.

Darren McLoughlin and Donal Flynn also kicked points of note and by the time the half time whistle sounded, the game was already beyond Bornacoola as Mohill had raced impressively into a 0-12 to 0-1 half time lead.

And all of this despite the harsh black carding of Stephen Conaty within the first ten minutes.

Bornacoola did make a better fist of proceedings in the second half, as Philip Howard, Sean Mc Keon, Michael Duignan, Brian Conroy and substitute Kevin Shanley all found their range and at one stage the gap was reduced to a respectable eight points.

However, the coup de grace for Mohill was delivered mid-way through the second half when a flowing move ended with Padraig Tighe one on one with Bornacoola keeper Gerry Gearty and he made no mistake from eight yards out to seal a comfortable victory for the town team and ensure their progress to the quarter finals.