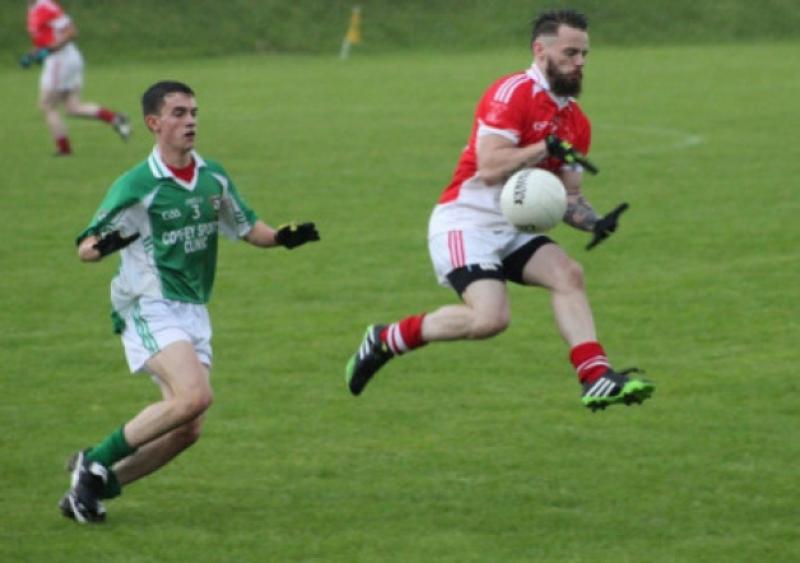 Ballinaglera reached the knockout stages of the Glenfarne Wood Products Intermediate Championship with a hard earned win over Mohill’s second string in Ballinamore on Saturday last.

Ballinaglera reached the knockout stages of the Glenfarne Wood Products Intermediate Championship with a hard earned win over Mohill’s second string in Ballinamore on Saturday last.

Despite the inclement weather this was an entertaining competitive game played by two fit teams. The result could have gone either way, the winners only going ahead with minutes left.

Mohill’s future in the Intermediate grade will now depend on playoffs while Glera away the draw for quarter-finals.

Ballinaglera’s victory means they top what turned out to be the most competitive and hard fought group in the GWP sponsored Intermediate Championship with three teams all qualifying with two wins apiece.

Ballinaglera, Aughnasheelin and St. Patrick’s Dromahair all beat Mohill but against each other, they all suffered one loss with Ballinaglera taking top spot by virtue of their superior scoring difference.

In some ways, Mohill may be relieved with the result as the fact that the third best team came from this group negates the effect of their concession of their first round encounter against St. Patrick’s Dromahair, a decision that could easily have had huge consequences for the championship had not both Ballinaglera and Dromahair won last weekend.

Ballinaglera got off to a good start, Seamie McMorrow scored twice and Padraig Clarke got a point while Mohill missed three easy frees in the same period.

Gavin Kelly steadied the ship in the 10th minute with a well taken point but Colm McGuire gave Glera a three point lead minutes later. Mohill then had a golden period scoring 2-3 without reply, scorers were Keith Keegan 1-1, Gavin Kelly 1-1 and Eanna Madden 0-1.

The second half was fast and furious both teams content to play football and the lead changing hands all through.

Ballinaglera took a three point lead in the last few minutes, they had to withstand an Mohill onslaught on goals during injury time but managed to hold on for a vital win.