Clancy goes from low to high with dramatic winner 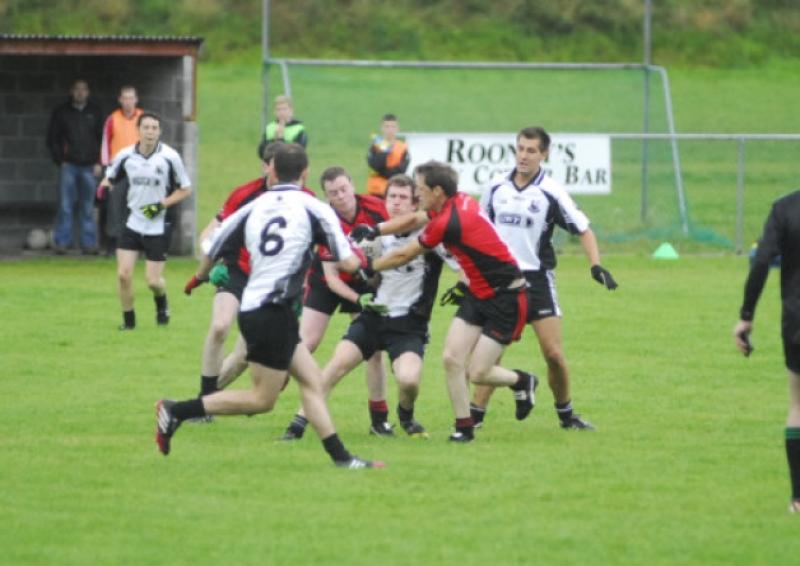 Barely a minute after an inexplicable miss from an easy free, Fergal Clancy redeemed himself in spectacular fashion to give Glenfarne/Kilty a slender victory over an unlucky Fenagh St. Caillin’s.

Barely a minute after an inexplicable miss from an easy free, Fergal Clancy redeemed himself in spectacular fashion to give Glenfarne/Kilty a slender victory over an unlucky Fenagh St. Caillin’s.

Fenagh showed remarkable spirit to over-turn a four point deficit ten minutes into the second half to actually take a two point lead with less than five minutes to go in a rain soaked and sodden Drumkeerin.

But in an intense match that twisted and turned, Glenfarne showed a lot of spirit and character to rally in those final minutes, first drawing level before Clancy made amends for an untypical missed free by breaking past three or four Fenagh defenders to score the match winning point with the last kick of the game.

It was tremendously hard on Fenagh St. Caillin’s who looked on course for a heavy defeat early in the second half but produced a 15 minute spell that yielded six unanswered points and two missed goal chances along with a couple of bad wides.

At that stage, Glenfarne looked all at sea as Fenagh were dominating possession in the middle of the park and they couldn’t get a handle on young Ryan O’Rourke who was causing Glenfarne’s defence huge problems.

All of this was accomplished without Donal Wrynn and for a mainly young team sprinkled with some very long serving veterans, it was a remarkable performance.

Credit too Glenfarne/Kilty for their resilience - Fergal Clancy probably wasn’t at the level he usually operates at but when the heat was on for the north Leitrim men, Clancy hit the match winning point under immense pressure.

Considering the conditions both teams operated in, it was a fine contest with two teams going full bore for the win and to be honest, a draw would probably have been the fairnest result on the performancs of both teams.

Glenfarne had a lot of good performances - Niall Clancy looked a step above when on the ball, Robbie Broughton and Stephen Sweeney did well in defence, Conor O’Rourke worked very well in the middle of the park while sub Cian Rock made a good impact when brought on.

For Fenagh St. Caillin’s, defeat is hard to take but there are many bright spots, none more than the exciting Ryan O’Rourke & Michael Doonan in attack. Niall Butler did well in the middle of the park while Paul Gill and Padraig Flynn lead the defence brilliantly under pressure.