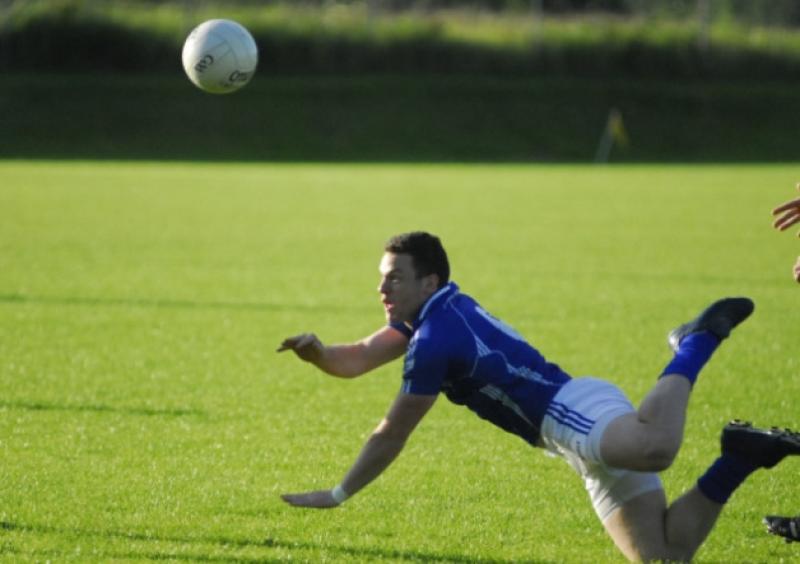 Goals win games and so it was here as three Allen Gaels goals was enough to see them through to the quarter finals of the 2014 Connacht Gold Senior Championship.

Goals win games and so it was here as three Allen Gaels goals was enough to see them through to the quarter finals of the 2014 Connacht Gold Senior Championship.

Played in a saturated Cloone pitch, this game never rose above the mediocre, with players slipping all over the field. It was the younger Allen Gaels outfit that prevailed with Carrigallen bound to be disappointed that they could not make much use of the amount of possession they had throughout the match.

Carrigallen started off the match with three wides including a 45 from goalkeeper Enda Lyons. Bernard O’Rourke then opened the scoring when he put a 21 metre free between the posts. Allen Gaels were finding the conditions very difficult to deal with but Nicholas Moore shook off a number of tackles to register Allen Gaels’ first score.

Following the kick out Martin Beirne raced through the middle and scored Allen Gaels’ first goal. Two fine points from play for Carrigallen by Gary Reynolds and Barry Dolan brought them to within a point of Allen Gaels with 15 minutes played.

Allen Gaels gained the upper hand after this and James Flynn scored an excellent point from play and in the space of two minutes Nicholas Moore hit the post twice, one from a free the other from play. Shane Walsh made up for these misses with a point of his own to put Allen Gaels three points ahead with 20 minutes played.

With scores very difficult to come by, both sides were guilty of some very poor shooting as they both brought out their goalkeepers to take frees and 45s from all angles which brought no luck for either side.

The game became disjointed and very stop/start as a result of this lack of scoring.

Finally after 10 minutes of nothing happening Owen Ward made a great run forward and pointed when a goal looked possible. This was the final action of a poor first half with Allen Gaels leading by 1-3 to 0-4.

Alan McTague replaced the injured James Flynn but it was Carrigallen who got off to the better start with Bernard O’Rourke pointing to leave just a point between the sides. Nicholas Moore missed an easy free for Allen Gaels as Eamonn O’Malley shot the equaliser for Carrigallen immediately from the kick out.

Carrigallen were ahead again by a point when wing-back Liam O’Rourke pointed with just five minutes remaining.

Game over, all that was left was for Gary Reynolds to put over a last minute point for Carrigallen but it was too little too late as Allen Gaels’ two goal burst was enough to see them through to the quarter finals.