Impressive Drumreilly turn on the style to over-whelm poor Annaduff 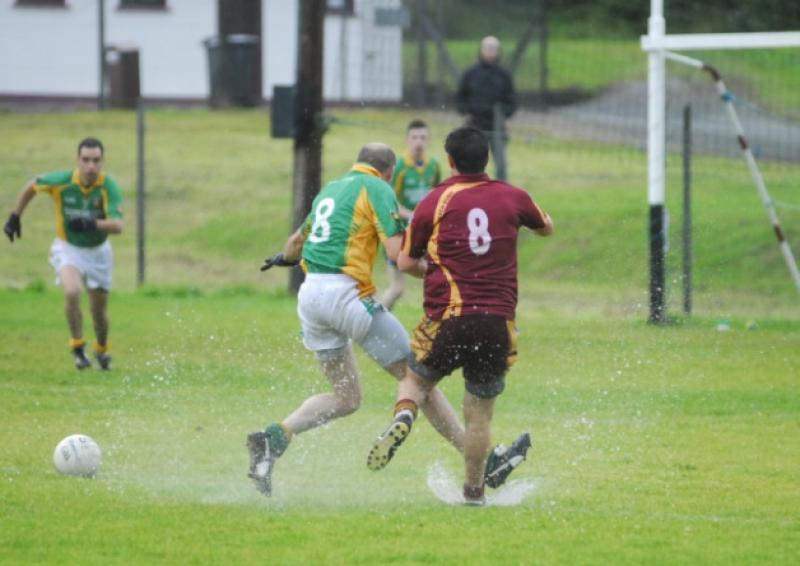 It may have taken them a while to translate their dominance into scores but Drumreilly over-whelmed a desperately poor Annaduff in Drumkeerin last Saturday.

It may have taken them a while to translate their dominance into scores but Drumreilly over-whelmed a desperately poor Annaduff in Drumkeerin last Saturday.

Beset by awful conditions that featured a constant driving rain and a pitch that was almost water-logged in places, Saturday’s Group Three encounter was a test of resolve and the even more basic task of keeping your feet.

And Drumreilly met the challenge head on and dominated the game, if not always on the scoreboard, but where it mattered - in the battle for possession, in the scrap to dominate and in the fight to get on top.

With the weather making attacking play a lottery at times, the scale of their dominance was reflected by the fact Drumreilly missed a penalty and Annaduff failed to score during the entire second half.

Drumreilly started as they meant to continue when a mis-hit ball almost ended up in the Annaduff net with Nigel Maguire opening the scoring four minutes in from a thirty metre free.

Annaduff almost hit back in devastating fashion when Kenny Cox’s mazy run saw him blow past three defenders but his shot was deflected over the bar just when it appeared to be heading to the Drumreilly net on six minutes.

A goal did arrive on nine minutes and it came by virtue of the qualities that typified Drumreilly’s performance - an Annaduff kickout was knocked down to James Holohan, his quick pass and an even quicker off-load released Brian Fee who sped in from 30 yards out to fire a powerful shot to the net.

Annaduff tried to hit back but had three missed chances, Kenny Cox and Sean McNabola missing good chances before Dermot Holohan scored a nice point on the run to extend the Drumreilly lead while Nigel Maguire had a free punched clear off the line.

Drumreilly looked as if they would take complete control when James Holohan was dragged to the crowd after a high ball broke kindly for him but Nigel Maguire’s spot-kick was brilliantly saved and then cleared by keeper Jim McCormack.

Brian Fee did very well to dodge past defenders to point on 22 minutes but Annaduff enjoyed their most productive spell with two Sean McNabola points, the second a great score from a tight angle after a Kenny Cox pass. However, a few more wides prevented Annaduff from closing the 1-3 to 0-3 halftime gap any further.

After a few downpours that left you wondering if the game could be finished, Annaduff almost got the goal they desperately needed only for Michael McGirl to make two saves from punched balls as the ball bounced around the goalmouth area.

Drumreilly had a few wides of their own before Nigel Maguire pointed a free. The scoring rate continued to be slow but Drumreilly were beginning to assert their dominance when a five man move down the wing ended with a great James Holohan point on 15 minutes.

Nigel Maguire added a free two minutes later and suddenly, Drumreilly were six points clear and that gap looked insurmountable in the difficult condition for an increasingly tired looking Annaduff.

And Drumreilly set the seal on their victory with eight minutes left in the half from a more direct route. A long ball seemed well covered by the Annaduff defence but the ball spilled and quick as a flash, the ball was transferred to an unmarked Frank Holohan who blasted the ball past a helpless McCormack in the Annaduff goal.

Holohan immediately added a point and Drumreilly set their seal on a comprehensive victory with points from Brian Fee and the impressive Declan Maxwell before the final whistle.