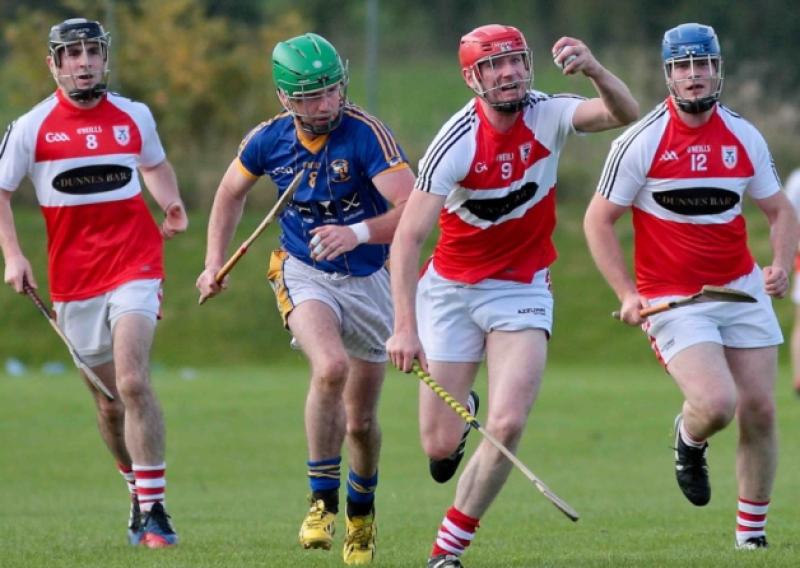 Carrick snatched the win thanks to a late levelling James Glancy goal that was followed by a winning Clement Cunniffe free conversion.

After winning the title for the past two years, Cluainín looked set for victory in the 59th minute of Sunday’s semi-final when Gavin O’Hagan put Cluainín into a two point lead when tapping over a free.

However with stoppages, etc., another four plus minutes had yet to be played and Carrick, who had whittled back a six points Cluainín advantage to the minimum thanks largely to the clinically accuracy of leading marksman Clement Cunniffe from frees.

However O’Hagan’s score looked to have ended that revival before Carrick’s James Glancy stood up to be counted.

After winningpossession out near halfway, Glancy burst forward and fired to the net to put Carrick ahead for the first time since the fourth minute. Cluainín’s O’Hagan did manage to level again two minutes later but once again Carrick dug deeper to claim a place in the final.

This time Clement Cunniffe was the hero. Cunniffe won the puck out at midfield and was fouled. He calmly split the Cluainín posts from the placed ball.

Cunniffe opened the scoring when he shot a fourth minute point. But Cluainín levelled four minutes later when Gavin O’Hagan converted a free. When Karl McDermott shot over from play in the 10th minute he put Cluainín into a lead they never surrendered until Glancy’s goal 51 minutes later.

Cluainín went three points ahead by the 14th minute after Gavin O’Hagan shot over twice with Cunniffe replying at the end of the first quarter.

Cluainín responded with four unanswered points when Gavin O’Hagan found the range twice from play and frees. Carrick replied with an Alan Duffy point. James Rooney from play and Gavin O’Hagan from a free added a point apiece before the break that put Cluainín ahead by 0-10 to 0- 3 at halftime.

In the opening four minutes of the second half, Cunniffe found the range from a free and play but O’Hagan hit back with a 35th minute Cluainín free. The gap between Cluainín and Carrick remained at six points over the next five minutes with Cunniffe putting over a pair of frees while Gavin O’Hagan (free) and Karl McDermott scored at the opposite ends.

Cunniffe & O’Hagan swapped points but Carrick upped their game in the final quarter and reduced the deficit to the minimum by 58th minute with five unanswered points, four of which were Cunniffe frees while Danny Byrne scored from play.

However Cluainín went back into a two point lead when Gavin O’Hagan hit a 59th minute 47 metre free over. The game changed completely two minutes later when James Glancy goaled to put Carrick ahead.

Cluainín fought back and levelled with a 63rd minute Gavin O’Hagan free conversion. But Carrick-on-Shannon claimed victory when Clement Cunniffe pointed a free from midfield.