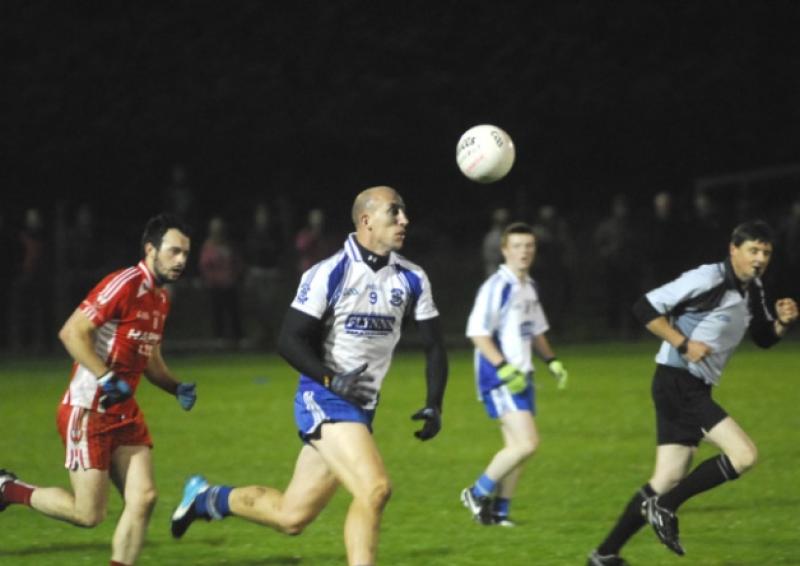 After a narrow escape the first day in the drawn game, St. Mary’s made no mistake last Friday in booking their place in the Pyramid Bookmakers Junior A Championship Final.

After a narrow escape the first day in the drawn game, St. Mary’s made no mistake last Friday in booking their place in the Pyramid Bookmakers Junior A Championship Final.

Dromahair, just five days after their historic Intermediate Championship success, started best under lights in Kiltubrid last Friday but once the Carrick men found their feet after a ropy first quarter, there was no looking back for St. Mary’s.

The Junior A status of this semi-final replay belied the quality of the players on show with James McGrail, Daire Farrell and Joe O’Rourke from St. Mary’s all seeing action in the Senior County Final while Gerard Kelly, Barry Loughlin, Niall Hopper, Michael McKeon, Fergus Meehan, Robbie Cunningham and Gary Fowley all saw action in the Intermediate Final.

It meant there was a high standard on show and both teams delivered strong performances on a slippy pitch which had patches of mist floating across at various times during the contest.

Dromahair probably should have won the first day out and they will regret not taking their chance at the time, particularly as it is hard to know just what effect the Intermediate Final celebrations would have had on their performance last Friday.

Fourteen minutes into the game, Dromahair led by four points and looked faster, more fluent and sharper in most sectors of the field but a goal from Damien Butler, set up by the excellent Niall Comerton, transformed the contest.

Comerton was at the heart of the St. Mary’s attacking strategy as he led the line extremely well and used all of his experience against a strong Dromahair attack.

But where St. Mary’s really laid the foundation for their victory was in the middle of the park where James McGrail started slowly but then started to dominate and control the contest.

Dromahair’s Gerard Kelly continued his good form, running the show early on for the north Leitrim but once McGrail started to make the big catches in the middle of the field, St. Mary’s were a different team.

Suddenly there was far better ball going into Comerton and his forward colleagues and with Colin McWeeney providing a physical presence and Alan Duffy and Damien Butler working back to win ball, St. Mary’s cut off the supply of ball to Dromahair’s young and dangerous forwards.

Dromahair did cut the gap back to just a point early in the second half when they converted a spot-kick but they could never get on level terms and St. Mary’s steadied themselves with defenders Fergal Reynolds, Kieran Heever and David Crowe impressing under the pressure.

Dromahair kept trying and trying but as they forced the game, it left gaps in defence and St. Mary’s hit them expertly on the break with the pace of Joe O’Rourke and Comerton’s match awareness punishing Dromahair at every opportunity.

St. Mary’s now meet Kiltubrid in the Junior A Final in what should be an intriguing encounter as a young Kiltubrid take on their more experienced neighbours.