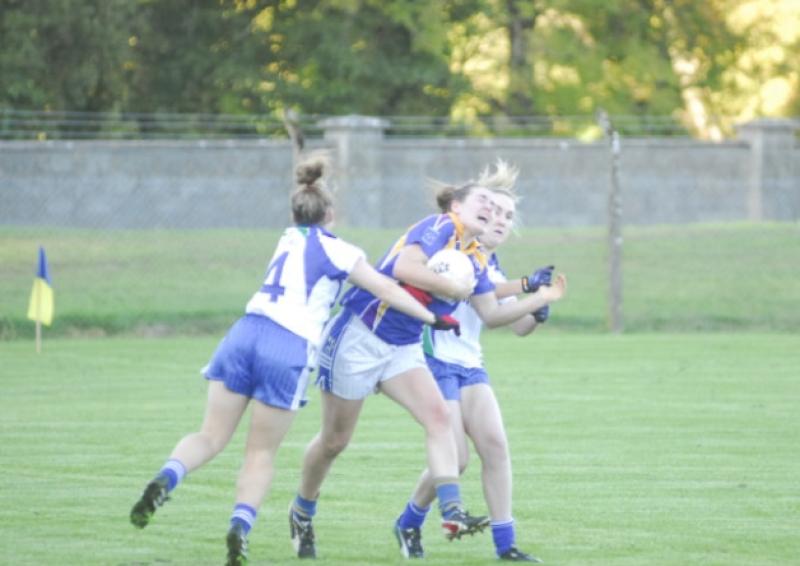 It is impossible to know where to start with a game that featured extra-time, a dispute over playing numbers at the start of extra-time, a controversial penalty to tie the game and, oh, yes, some ferociously hard and tought football.

It is impossible to know where to start with a game that featured extra-time, a dispute over playing numbers at the start of extra-time, a controversial penalty to tie the game and, oh, yes, some ferociously hard and tought football.

Both teams rescued their hopes of lifting the Division One title - St. Joseph’s scored a cracking goal two minutes after the end of normal time when Aughawillan seemed poised for the win while Aughawillan snatched a draw with a controversial penalty at the end of extra-time.

With a good deal of animosity evident on the pitch, it was a game where both teams tackled ferociously and heavily with four yellow cards, two for each team, throughout the game as you definitely got the feeling that neither team likes each other too much.

The draw, as much as both teams may feel otherwise, was probably the fairest result as neither side deserved to lose but St. Joseph’s would appear to have a case of feeling hard done by after a last gasp penalty was awarded for an alleged foot-block on Niamh Donegan after her late shot hit the post.

The unerringly accurate Aileen Maguire capped a stunning display by calmly slotting home the penalty to take her tally to an amazing 1-11 after an exhausting contest.

It was hard to see where the penalty foul occurred as although defender Alanna Bohan did collide with Niamh Donegan, it was after Donegan’s shot was away. Referee Eamon O’Grady, however, was sure in his decision and the game goes to a replay.

The controversial finish was a fitting end after the game almost descended into farce when Aughawillan, who finished normal time with two players in the sin-bin, refused to re-start without a full compliment of players as they pointed out, rightly as it turns out, that yellow carded players could be replaced for extra-time. It led to a delay of 10 to 15 minutes before the situtation was sorted out.

With Aileen Maguire hitting two points to one from Bronagh O’Rourke, St. Joseph’s took early control when Aine Heslin was taken down and O’Rourke converted the penalty. Maguire hit back with two points in between points for Clare Owens and Michelle Heslin as St. Joseph’s saw Alanna Bohan receive a yellow card as they led 1-3 to 0-4 at the break.

St. Joseph’s continued to impress with points from Heslin and O’Rourke (2) to two from Maguire frees but five unanswered points, four from Maguire and one from Maeve Quinn between the 11th and 22nd minute, had Aughawillan two clear.

Bronagh O’Rourke gave St. Joseph’s some hope with a free but points from Maguire and Carla Le Guen seemed to suggest the title was on it’s way to Aughawillan but a very heavy Catherine Holohan challenge on Sharon Kerrigan led to a yellow card while Maeve Quinn joined her in the sin-bin after dragging Kerrigan to the ground two minutes later.

That gave St. Joseph’s a two player advantage and they charged forward but it still took a wonder score to tie the scores when Carmel McCartin’s 30 yard shot flew to the far left hand corner of the net to send the game to extra-time.

With both sides suffering badly in extra time and a yellow card for Carmel McGovern, scores were few and far between with keeper Shannen O’Rourke saving from sub Cianna Stringer while Maeve Quinn pointed after a good run from Catherine Holohan.

A Michelle Heslin free tied the scores in the first minute of the second half. With a lot of stoppages, nobody could get a rhythm but a huge point from Kerrigan put Joseph’s in front.

Maguire hit a free off the post and St. Joseph’s looked to have sealed the win with two O’Rourke points before the late penalty drama sent the game to a replay.