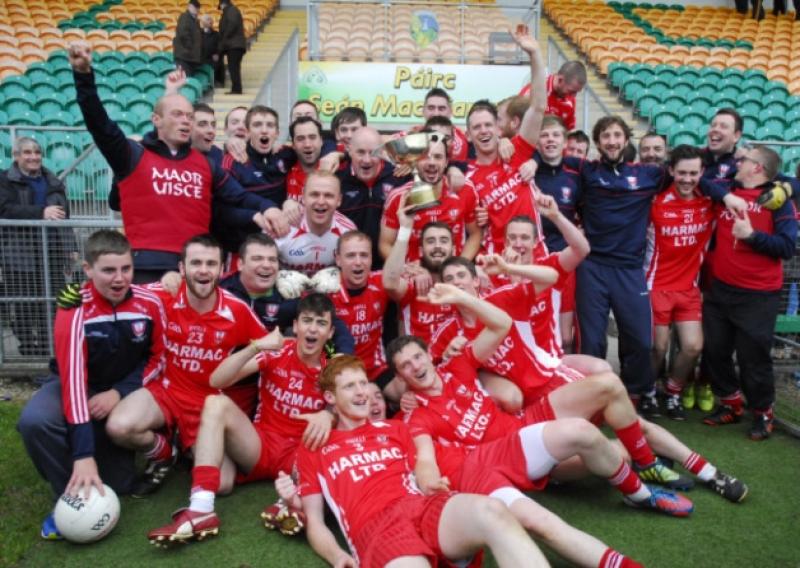 The celebrations may have finally died down but St. Patrick’s Dromahair face a daunting task next Sunday when they make their Connacht Club debut.

The celebrations may have finally died down but St. Patrick’s Dromahair face a daunting task next Sunday when they make their Connacht Club debut.

Mayo Champions Ballyhaunis travel to Pairc Sean Mac Diarmada to take on the newly minted Leitrim champions in the AIB Connacht Intermediate Club Championship quarter-final (2pm throw-in) for what promises to be an intriguing contest.

No more than Dromahair, Ballyhaunis have been working hard to reach Senior level in recent years and they are obviously on a roll as the club’s hurlers claimed the Senior Hurling Championship title last Sunday with Mayo All-Star Keith Higgins prominent on the day.

There is no doubt that the Mayo men are taking the game extremely seriously with reports reaching the Observer of members of the Mayo management team searching for videos of the Leitrim Intermediate Final a couple of days after Dromahair’s win.

Keith Higgins will naturally take the lion’s share of attention as the Mayo star anchors his defence but it was Niall Prenty, nephew of Connacht GAA Council Secretary and Ballyhaunis selector John, who won the man of the match award in the Mayo Final as he scored seven points in the thrilling 0-12 to 0-11 victory over Hollymount/Carramore.

Prenty was a top underage prospect in Mayo and he will take some watching next Sunday as Dromahair will hope to replicate their ferocious defensive efforts of the Leitrim Final against Ballinamore Sean O’Heslin’s.

There is no doubt that Dromahair are in peak condition but their biggest task will be in coming down from the high of their historic Intermediate title, the highest honour the club have ever won. The fact that the win came after years of heart-break adds to the celebratory effect and makes all the harder the task to regain an even status.

Manager Gerry Ballantine will have his work done on getting the focus back on the task in hand and the defeat of their Junior side last Friday, although painful, will ,probably help in putting feet firmly back on the ground.

Ballyhaunis will start as favourites but the Intermediate grade is one where Leitrim teams have been more than competitive in recent years with Gortletteragh, Carrigallen and Melvin Gaels putting up a good show in recent years but it will still take an almighty effort.

Dromahair are truly in bonus territory, the Intermediate crown and Senior status was the target this year but they can play with freedom and confidence in the Connacht Club, without the pressure of expectation and with their ferocious defence, the north Leitrim men are more than capable of a shock.