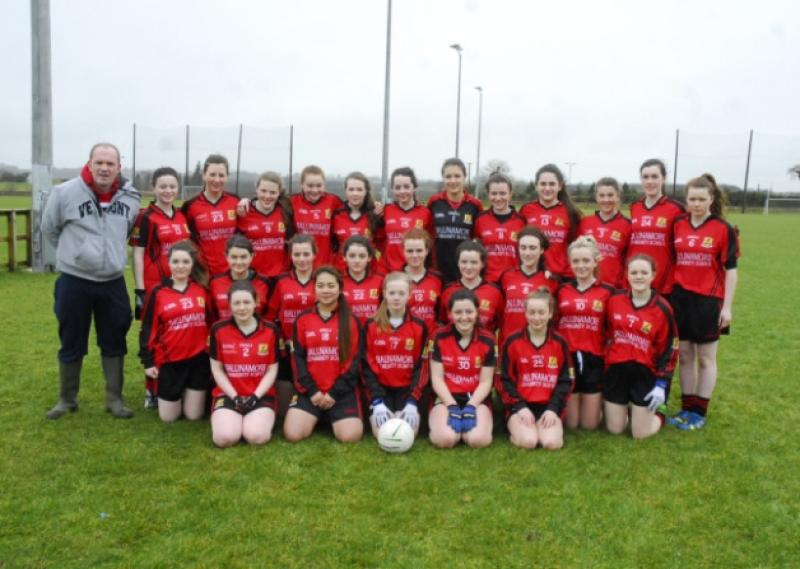 Last Wednesday’s Tumble Jungle Connacht Senior C Final in the Connacht Centre of excellence saw the Ballinamore students give their all in an entertaining contest but ultimately their challenge fell just short against a strong school from Castlebar.

Last Wednesday’s Tumble Jungle Connacht Senior C Final in the Connacht Centre of excellence saw the Ballinamore students give their all in an entertaining contest but ultimately their challenge fell just short against a strong school from Castlebar.

The Mayo school got off to a good start despite the tricky conditions and they opened the scoring with a Melissa Patterson point.

Ballinamore hit back quickly with an Eilish O’Dowd point but it was the Mayo side who were looking the stronger during the opening stages.

Despite being under considerable pressure Ballinamore took a 10th minute lead when full-forward Aileen Maguire struck for her first score of the game.

That score brought an immediate reaction from Davitt College who hit 1-2 in less than two minutes to take control of the contest.

Laura Brody’s point was followed by an Anna Tully goal after a 45 wasn’t cleared and Tully powered her shot to the Ballinamore goal from close range.

Amy Dowling was next to score for Davitt College as Ballinamore found themselves a goal down midway through the opening half.

Aileen Maguire converted a free for Ballinamore CS to reduce the deficit before Davitt College struck for their second goal, and again it came from a 45 that wasn’t cleared.

Anna Tully was again the first to react to the breaking ball and although her shot took a deflection there was nothing Weronika Wresniewska could do to prevent the ball finding the back of the net.

With the momentum fully with them and the wind at their backs Davitt College struck a further three points without reply with Amy Dowling scoring twice in quick succession before Danielle Caldwell’s shot resulted in the white flag being raised.

On the stroke of half-time Ballinamore gave a glimpse of their attacking capabilities as Katie McNulty, Roisin McHugh and Emma McGovern combined to release Aileen Maguire who struck a fine point to leave her side trailing 0-5 to 2-7 at the interval.

Whatever Seamus Mullen said to his players during the break certainly had the desired effect as they began the second half with renewed purpose and belief.

Central to their bright start to the second half was Aileen Maguire who looked almost unplayable when quick ball was delivered in her direction.

Maguire scored the first point of the half after good play from Eilish O’Dowd and seconds later she struck for a goal.

Running from deep she powered past any would be challenger before striking an unstoppable shot to the roof of the Davitt College goal.

With Davitt College seemingly caught in the middle of a hurricane with Aisling Quinn and Roisin McHugh both beginning to have a big influence on proceedings, Maguire scored again when she pointed to leave just a goal between the sides once more.

Danielle Caldwell and Eilish O’Dowd then exchanged points before Aileen Maguire converted a free to reduce the deficit but they were then dealt a real blow as Davitt College struck for their third goal.

Laura Brody drilled a powerful free towards the Ballinamore goal and although it seemed as though Weronika Wresniewska was well placed to save the shot, the umpire immediately signalled the ball had crossed the line.

Although that goal seemed to dent the confidence of the Ballinamore players they refused to throw the towel in and replied with points from Katie McNulty and an Aileen Maguire free.

To further illustrate it would not be Ballinamore’s day, the Davitt College goalkeeper Kirsten Sheeran made outstanding saves to deny both Roisin McHugh and Carla LeGuen.

After those saves points from Claire McDonagh and Amy Dowling extended the Mayo school’s lead to six points with five minutes remaining and victory was secured with Laura Brody scoring a goal and a point in the closing stages.