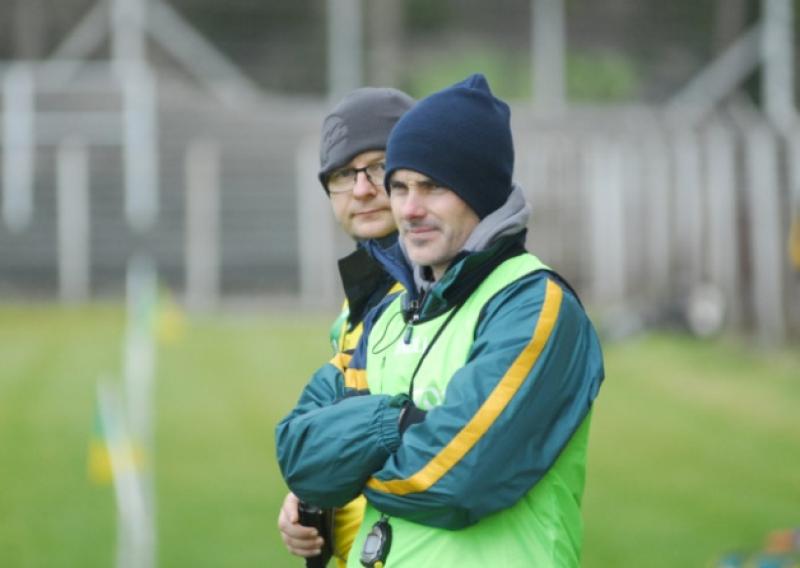 Disappointed though he may have been with the manner of Leitrim’s five point defeat at the hands of Antrim, when reflecting on the game Leitrim manager Shane Ward remained convinced progress is being made and the team is headed in the right direction.

Disappointed though he may have been with the manner of Leitrim’s five point defeat at the hands of Antrim, when reflecting on the game Leitrim manager Shane Ward remained convinced progress is being made and the team is headed in the right direction.

In the first two league games of the campaign Leitrim squandered healthy leads but on Sunday last with the exception of the early goal, Leitrim were always chasing their opponents.

“Commenting on the early stages of the game Shane noted, “We got an early goal and I thought we showed great impetus in the move going forward to finish off the goal but then we tended to lay back and when we laid back Antrim went down the field and scored another goal and I think that was our story for the game.

“We went ahead or we scored and then we let Antrim reply with two and that was I suppose the story of the entire game.”

While Shane was quick to point out that this Leitrim team is still a work in progress and that there were positives to be taken, he also accepted there is room for improvement.

“We had a lot of positives today but some of our decisions on the field are still yet to come to fruition. They have been working on a lot of different things in training and sometimes translating them to matchplay can be difficult. It’s a work in progress very much.”

Leitrim’s cause wasn’t aided by the injury sustained by Donal Wrynn but after his Sigerson Cup heroics Shane felt the Fenagh man may have been vulnerable.

“Donal picked up a dead leg. Donal has been fatigued this week after coming back from the Sigerson Cup win last weekend. He was reasonable in training this week at best and we knew that he maybe having difficulty coming through this game today. Sometimes when you’re fatigued and not going at full intensity you tend to pick up niggly injuries and that’s just what happened.”

Leitrim began the second half brightly with Wrynn’s replacement Ronan Kennedy leading the fight but Antrim were well drilled and were always able to register a point when one was needed.

“It was a cause of confusion in the second half how we were able to convert two or three scores in a row and then let Antrim run 40 or 50 metres with the ball in their hand and pick a score off which took away from our scores. It’s something we’ll have to work on over the week and reflect on looking towards next weekend.”

Antrim began even more difficult to penetrate as they dropped up to 13 men behind the ball but Shane didn’t feel it was the opposition’s tactics that were the problem.

“It can be difficult when the opposition are in the lead but I thought Antrim were not overly defensive today, I though it was some of our decision making and we tended to play into their hands at times with not using our imagination in how to change our approach play but it is something we will be working on next week and it is something we will be reflecting on going forward to next weekend’s game.

The defeat will no doubt have hurt but Shane remains confident Leitrim are moving in the right direction.

“When we started off in the beginning of the year and I spoke with you first we looked at the process that was involved and what we would have to do to get forward. There has been massive positives from our point of view, looking at the game people may not see that but there has been massive strides forward made and when it does happen and it does go right they’ll rarely look back.