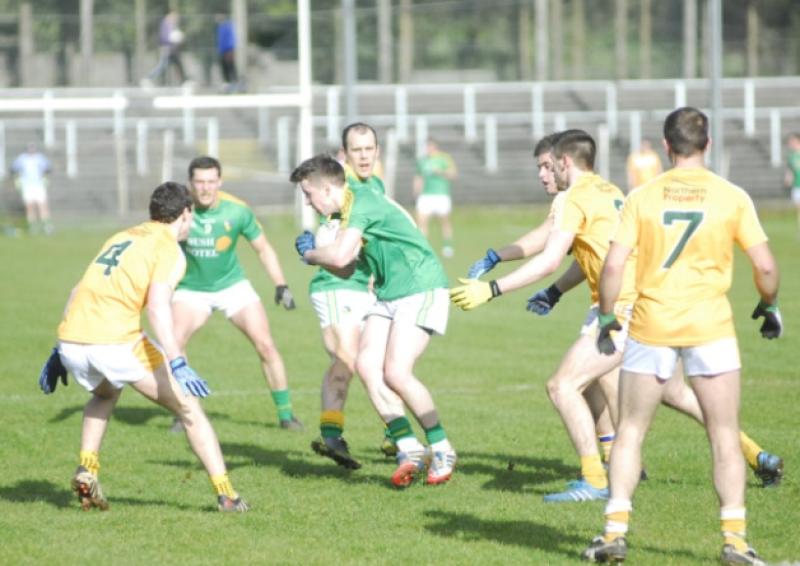 After three rounds of the Allianz National League Division campaign promotion looks out of the question for Leitrim as they await their first win but despite the five point loss Shane Ward was keen to focus on the positives after the game.

After three rounds of the Allianz National League Division campaign promotion looks out of the question for Leitrim as they await their first win but despite the five point loss Shane Ward was keen to focus on the positives after the game.

The fact that it is so early into Ward’s tenure as Leitrim’s manager means the things he is trying to implement may not have fully come to fruition but with a healthy mixture of young and experienced players he remains confident things will come good for Leitrim.

Looking for the positives Alan McLoughlin took his goal excellently, Cathal McCrann was once again assured between the sticks and James McGrail caught the eye in midfield.

Perhaps the failure to capitalise on the opening score of the game, Alan McLoughin’s breakthrough goal could be pointed to as a failure, even more so when you consider that the game’s next score was an Antrim goal.

However, to pinpoint one score as a decisive moment is perhaps over analysing a moment more than it merits as Antrim were dominant for the vast majority of the game.

The bitterly cold conditions, swirling wind and at times blinding sun made for conditions that weren’t ideal but that is not something anybody involved in the Leitrim set-up was looking to use as an excuse in the aftermath of the game. To put it simply, the better team won.

Antrim settled well after the throw-in but it was the Leitrim faithful, few though they may have been, who were first to raise their voices when Mohill’s Alan McLoughlin struck for the game’s opening score. A score which illustrated much of the cohesive passing and running that Shane Ward is attempting to implement in this Leitrim team.

Gary Reynolds brought the ball out of defence and after telling contributions from Kevin Conlan, James McGrail and Danny Beck the ball was worked to Alan McLoughlin who showed plenty of composure to cooly dispatch the ball to the corner of the goal.

Unfortunately Leitrim never had the opportunity to fully capitalise on the advantage of their fifth minute breakthrough as within a minute Antrim had levelled matters with a goal of their own.

A ball behind the Leitrim full-back line found CJ McGourty in more space than a player of his ability should be afforded and he was then able to play the ball across the goal to Michael Pollock who had the routine task of dispatching the ball to the goal.

Kevin Conlan restored Leitrim’s lead with a ninth minute free but it was becoming evident that Leitrim were having difficulty with the movement of the Antrim players, in particular the half-back duo of James Laverty and Justin Crozier. That was illustrated when Crozier found himself, unmarked, on the end a free flowing move and he slotted the ball over the bar, via the crossbar.

Antrim took the lead for the first time in 13th minute when Conor Murray was allowed too much time to shoot and he duly pointed from just outside the 45.

As the half progressed, Leitrim kept in touch and there was still just a point between the sides after 19 minutes with Kevin Conlan (free) and Alan McLoughlin on target for Leitrim while CJ McGourty (free) and Tomas McCann were on target for Antrim.

The second quarter of the game saw Antrim’s dominance reflected on the scoreboard with Ryan Murray and CJ McGourty pointing to open up a three point lead.

Although Darren Sweeney replied with a Leitrim score Antrim were looking dominant and further extended their lead with another CJ McGourty free followed by a Michael Pollock point.

Kevin Conlan replied with a 29th minute free for Leitrim but the closing stages were dominated by Antrim and a further three unanswered points gave them a commanding 1-12 to 1-5 half-time lead.

The start to the second half was very encouraging from a Leitrim point of view. Two Ronan Kennedy points gave hope the game was still there for the home side.

Four minutes after the restart Kennedy found himself with only Chris Kerr to beat. A point seemed inevitable and a goal quite likely but Kennedy opted to pass rather than shoot and the ball was cleared and the danger was gone.

Antrim fully punished Leitrim for that missed chance as they went straight up the pitch and James Laverty pointed. Leitrim kept battling but as the game progressed Antrim became more and more difficult to penetrate as they dropped up to 13 players behind the ball and when the opportunity arose they counter-attacked at pace.

The final stages of the game proved to be difficult to watch for the home support as Antrim produced a very professional exhibition of keep-ball, dragging the Leitrim players and routinely putting together sequences of upwards of 20 passes.

There may have been an air of despondency among the supporters upon the sounding of the full time whistle but Shane Ward will no doubt be looking forward to putting right what went wrong on Sunday next when Leitrim travel to face Division 4 pacesetters Ofally next weekend.