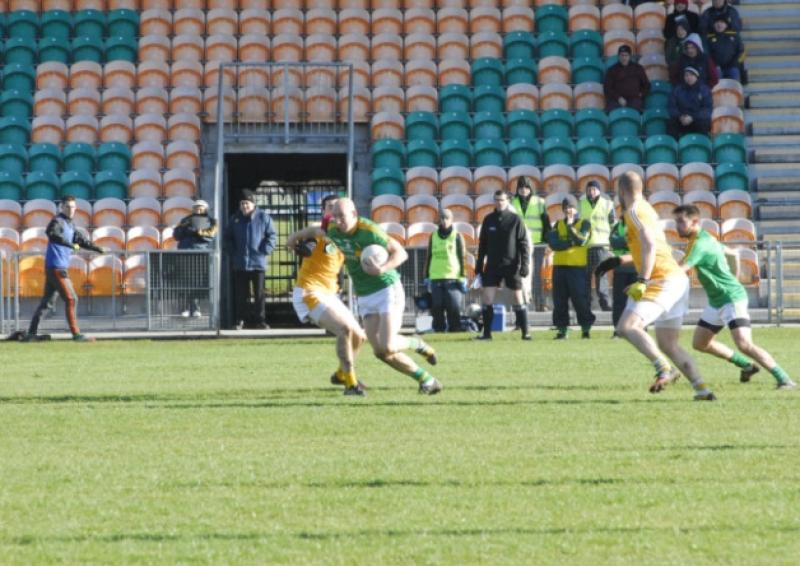 After two defeats from their opening two games there was an element of pressure on Antrim as they made the journey to Carrick-on-Shannon for last Sunday’s Allianz National League encounter.

After two defeats from their opening two games there was an element of pressure on Antrim as they made the journey to Carrick-on-Shannon for last Sunday’s Allianz National League encounter.

However, as they prepared to make the journey home it was Antrim and their manager Frank Fitzsimons who were they happier as they emerged with a five point win.

After congratulating his players Frank took a moment to assess the game from his viewpoint.

“It makes the journey a lot easier for us going up the road with two points in the bag,” was Frank’s initial reaction before pausing to pay credit to the efforts of the Leitrim team.

“Leitrim are a good team and we knew they were going to come back at us in the second half and they did to be fair but I thought our defence played very well today. Overall it was a good day for us. We were playing as well in the last few games but just weren’t getting the breaks.”

A seven point half-time lead suggests Antrim had it all their own way in the opening half but they found themselves on the backfoot following the concession of a fifth minute goal and Frank was particularly pleased with the manner in which his team responded to that setback.

That reaction saw his side cancel out Alan McLoughlin’s goal within a minute as Michael Pollock scored a crucial goal for Antrim.

“Usually teams would drop their heads but we didn’t and came right back at them and got the goal and that helped to settle us a bit.”

The second half saw Antrim display a different side to their game as they sat deep, putting up to 13 men behind the ball at times but they were always a threat on the break and never looked in real danger of losing their lead despite the strong wind.

“With that breeze we had no option but to play with men behind the ball but some of the runs out of defence from Justin Crozier, Owen Gallagher and Paddy McBride were super. We had to work hard for our scores but our backs were super all day.”

The work ethic throughout the team was something which pleased Frank and although some individuals were singled out for praise he acknowledged this was very much a team performance.

“The whole team was good and I am proud of them all because they played very well here.”

While full of praise for his entire team Frank reserved a few words of special praise for two of his star performers, Michael Pollock and CJ McGourty. Pollock scored Antrim’s goal and made a huge contribution, in a number of positions while McGourty finished the game with a grand total of eight minutes even though, as his manager revealed after the game he was operating some way below full fitness.

“Mickey Pollock and Mick McCann seemed to pull the strings in midfield.

“Mickey was super when he came in to half-forward, he is a very good player.

“Usually he plays inside for us but as you saw today he was controlling the game for us in the last 10 minutes, he was excellent.

“CJ McGourty is playing and he is only about 60% fit. He has bad hip trouble but he was excellent for us.”